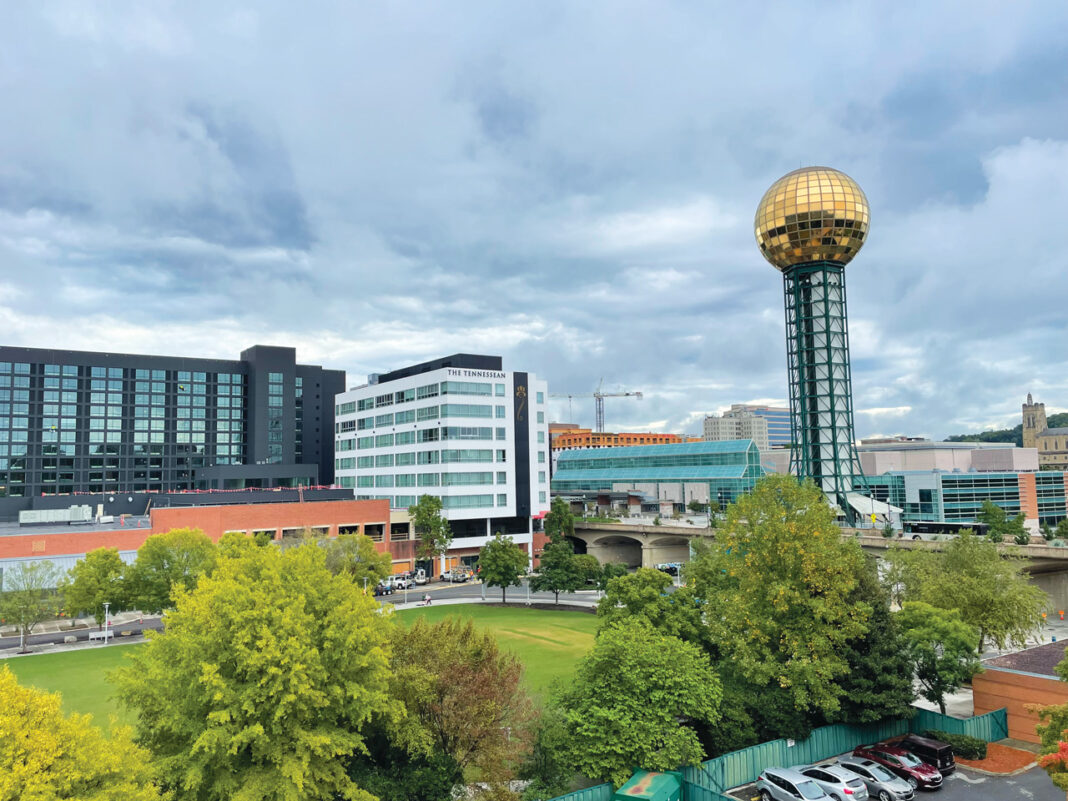 The Tennessee state flag is easily recognizable with its three white stars in a blue circle on a field of crimson red. The stars represent the western, middle, and eastern parts of the state, each with its own signature flair. I have visited bluesy Memphis a few times, and I have lived in Nashville, so I was thrilled to explore Knoxville, Jonesborough, and Greeneville in eastern Tennessee.

Knocking Around in Knoxville

My trip was in early October, so the trees hadn’t quite turned to the golden brush strokes of fall. But it was the perfect time to take in the sights and sounds of these vibrant towns nestled in the foothills of the Smoky Mountains. Our first destination was Knoxville, and because it wasn’t a football weekend (Neyland Stadium at the University of Tennessee is the nation’s fifth largest at 102,455 seats), our group was able to enjoy our stay unfettered and relaxed.

We checked into the Tennessean Hotel, which stands on the site of the 1982 World Fair Headquarters. The AAA Four Diamond property features 82 luxurious guest rooms and creates a running theme of the Tennessee River throughout its chic, elegant decor.

Once we were settled, we headed to historic Old City on the northeastern side of Downtown. The name became popular in the 1980s when architectural preservationists began to take notice of the historical significance of buildings that once housed companies like White Lily Flour. Today, it is a mix of live music venues, shops, and city loft-condominiums.

For dinner, we were treated to the globally inspired Vida and The Vault. Vida is on the main level of the old Holston Bank building on popular Gay Street. Grandly appointed, the restaurant was buzzing with patrons and the Pan-Asian food was intriguing and unexpected in this Southern city. Below the restaurant is The Vault, a speakeasy in — what else? — the bank’s vault.

A visit to the Knoxville Museum of Art kicked off our first full day. The 53,200-square-foot facility specializes in regional historical and contemporary art pieces.  Painted in 1955 by Marion Greenwood, the 30-foot “Singing Mural” canvas was my favorite for its illustration of the distinctive music styles of the state’s main divisions: the delta blues of West Tennessee, country music of Middle Tennessee, and religious and country music of East Tennessee.

Gay Street runs through Downtown and is a home to the historic Tennessee Theatre, galleries, parks, eclectic shops, bars, and more that 75 restaurants within one square mile. After a walking tour of the area, we were treated to the best sweets stop at the Phoenix Pharmacy and Fountain, an independently owned and operated full-service compounding pharmacy and authentic soda fountain. They specialize in handmade ice cream treats, decadent sundaes, hand-spun shakes, ice cream floats, and of course, fountain sodas. I couldn’t resist the Nana’s Pudding sundae made with “granny’s” oatmeal crisps, two scoops of vanilla bean ice cream, sliced bananas, and butterscotch, and topped with whipped cream and pecans.

If craft beer is more your speed, Knoxville boasts nearly 20 breweries on its Ale Trail. First, head to Knox Brew Hub to sample many of the area’s best on tap. Like a visitor’s center for beer, KBH tries to carry every local craft beer in the region. While you’re there, book a Knox Beer Tour to discover Knoxville’s beer scene. For a completely different brewery experience, check out Pretentious Beer and Pretentious Glass Companies. Housed together but in separate spaces, you can grab one of their 16 beer specialty brews on tap while you watch the artisans blow glassware and other objects.

Approximately 95 miles northeast of Knoxville, walking the streets of Jonesborough is akin to stepping back in time. “Tennessee’s Oldest Town” was founded in 1779 and is located in the heart of the southern Appalachian Mountains. Perfectly preserved and filled with historic charm, this small town of 5,500 is deeply rooted in storytelling and historic preservation.

In the middle of Main Street sits the Chester Inn Museum, located in the oldest commercial building in town and chronicles Jonesborough’s history. Built in 1797, the inn is a state-owned historic site operated by the Heritage Alliance of Northeast Tennessee and Southwest Virginia. There we met our town tour guide Bob Dunn, a spritely gentleman dressed for a day of touring.

Storytelling is at the heart of Jonesborough. Next to the museum, the International Story Telling Center is devoted to preserving Southern folklore through the spoken word; lectures and events are held throughout the year and every October the city hosts the National Story Telling Festival. This year marks the 50th anniversary of the festival, which takes place Oct. 7-9.

Up the road on a bluff and visible from the town below is the marriage of history and entrepreneurship found in the Tennessee Hills Distillery. Situated in the 1840s Salt House, which was used to store salt in the Civil War, owners Stephen and Jessica Callahan today take locally sourced grain and Appalachian spring water from the mountains to distill bourbon, whiskey, gin, vodka, and rum. Many have flavored varieties such as lemon drop corn whiskey, pecan pie rum, and — my favorite — S.E. Callahan’s blood orange and honey whiskey.

We stayed overnight at the historic Eureka Inn, originally a private residence when it was constructed in 1797. It also has been a boarding house, jury sequester room, ground-floor grocery store, and restaurant and is now an inn with 13 uniquely decorated rooms creating a captivating blend of past and present. That night, we watched a rainstorm roll through town from the second-floor balcony while rocking in chairs and sipping the aforementioned blood orange and honey whiskey. It was sublime.

Heading back to Knoxville, we drove to Greeneville, Tennessee’s second oldest town and the hometown and burial place of President Andrew Johnson. Lunch was served at the Catalyst Coffee Company, where we feasted on delicious pizzas and sandwiches with the knowledge that every purchase has a portion of its profits donated back to the community.

The life and history of our 17th president is on display at the Andrew Johnson National Historic Site and National Cemetery. Although Johnson was a tailor by trade, he worked his way through state and national politics, starting with his election as an alderman of Greeneville in 1829.

An afternoon journey on a small portion of the Appalachian Trail (see Jason Austin’s journey on the trails on page 36) through the Cherokee National Forest was a peaceful retreat and my favorite part of the trip. Some of our crew took the 2.4-mile out-and-back journey to Margarette Falls, and the moderately challenging trek led us to the picturesque, 60-foot-drop falls. It took us up some rocky areas and across a creek, but it definitely was worth it.

Our last dinner of the trip was served at Brumley’s Restaurant and Lounge in the General Morgan Inn and Conference Center. The 51-room inn is a grand old hotel in the heart of the Greeneville’s National Register Historic District. Known internally as a favorite site that Tucker Publishing Group President Todd Tucker and his cousin Lee have spent nights catching up over libations, the upscale Southern dining establishment offers an ample mix of cuisine, including the Black Angus Prime Rib dinner special that night.

My experience in eastern Tennessee left me relaxed, full, and wanting to return — hopefully again this fall when the leaves are changing.

Vida and The Vault