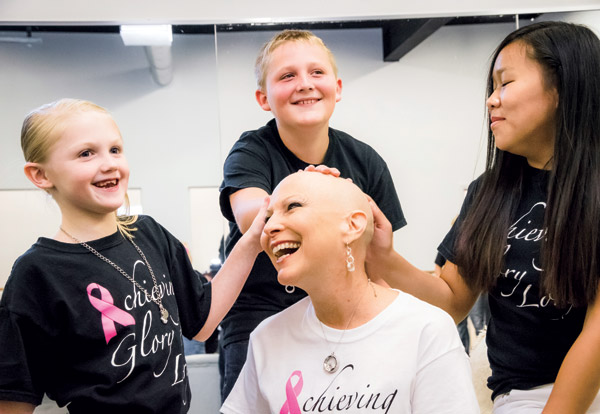 Despite annual mammograms and no family history of breast cancer, Lory White, 51, was diagnosed with invasive ductal/lobular carcinoma in March. She had no lump. In fact, the diagnosis came after she had a negative mammogram. She obtained an ultrasound of her dense breasts on the previous advice of medical professionals.

White credits the ultrasound procedure with saving her life. The ultrasound and subsequent MRI revealed several areas of cancer in her left breast. White is triple positive for estrogen receptors (meaning her cancer is sensitive to the hormone estrogen), progesterone receptors (meaning her cancer is sensitive to the hormone progesterone), and human epidermal growth factor receptor 2 (HER2). HER2 promotes the accelerated growth of cancer cells. This gene mutation causes cancer cells to make an excess of HER2. The mutation occurs in about one of every five breast cancers, according to the Mayo Clinic. This gene mutation can occur in other types of cancers and is not inherited.

“Mammograms are great for most people, but … I was told for a couple of years that my breasts were dense and that an ultrasound was going to show more,” White says. “My cancer was no longer contained. Where would I have been if I had waited a whole year until the next mammogram?”

White is the co-owner of Achieve Academy of Dance and Tumbling, 7635 Big Cynthiana Road. She is the mother of four and stepmother of two and lives next door to her dance studio. After she received the news, White opted to have both breasts removed. She says she was looking out for the best interests of her family.

Along with chemotherapy, White also was prescribed Herceptin, which specifically targets White’s type of cells, blocks them, and reduces the chance of recurrence. Her final Herceptin treatment should be in April 2014. She will soon begin a five-year regimen of the oral chemotherapy drug, Tamoxifen.

The ultrasound was White’s key to uncovering her diagnosis, but unless a woman has dense breasts, an ultrasound may not be necessary, according to Sheila Seiler, executive director of the Evansville Tri-State Affiliate of the Susan G. Komen for the Cure. “One should check with their healthcare professional for the screening tests best for them,” she adds.

Now, breast cancer advocacy is White’s newfound mission. She will have reconstructive surgery after this year’s Komen Evansville Tri-State Race for the Cure on Sept. 28 in Downtown Evansville, so she plans to be at the annual cancer awareness event.

“I hope I can walk the majority of it, and if not, then they will have a wheelchair to push me,” White says. “I am going to fight the fight, so I can dance the dance.”

For more information on the Komen Race for the Cure, visit komenevansville.org.