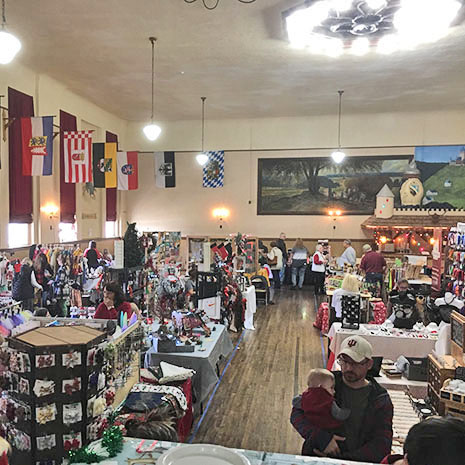 Christkindlmarkt is a German tradition like no other. Those traveling the streets of Germany and Austria during the holiday season are greeted with colorful decorations, hearty food, hot drinks, homemade chocolates and candies, heartwarming Christmas carols, and hundreds of craft and vendor booths.

But Tri-State residents don’t have to travel to Europe to enjoy this annual event. This vibrant tradition finds a home in Evansville this Saturday from 9 a.m. to 2 p.m. at Germania Maennerchor’s building at 916 N. Fulton Ave.

The upstairs Fest Hall and downstairs Ratskeller will be filled with more than 30 local craft vendor booths showcasing woodworking items, baked goods, sewn crafts, jewelry, and more, with additional booths set up outside. Five local authors will also be in attendance for book signings, and attendees can take photos with Father Christmas himself.

“The vendors are a variety,” says Jim Scheu, president of the Germania Maennerchor Foundation. “A lot of things are very well made and more in the artistic type of product.”

But these activities are for more than just the adults. Parents can take their children to the kids’ craft corner to create their own ornaments, build reindeer feeders, and meet Santa Claus. Scheu says he expects 80-90 children to attend throughout the day.

“(The foundation) makes most of our money off the food,” says Scheu. “What we do with the money is use it for scholarships for students studying German and we also have several charities around town that we support.”

“It’s a family affair,” Scheu says. “We have some fantastic artists down here and we just love for people to come.”