From Collegiate to Culinary

Locals call it A Squared. Bob Seger sang about it. It has 300 restaurants in a 20-miles radius and more than a dozen breweries, and the Big House!

Ann Arbor, Michigan, is home to the 200-year-old University of Michigan. If you think there is no better place to be in autumn than a college town, put Ann Arbor on your destination list. Delta flies from Evansville to Detroit three times daily; Ann Arbor is a 30-minute drive from Detroit Airport. Driving time to Ann Arbor from Evansville is about 7 hours.

The Wolverines
Some of the best strolls are on campus. Don’t miss the Gothic beauty of the Law Quadrangle.

Across from it is the pillared main entrance to the University of Michigan Museum of Art, one of the oldest university collections in the U.S. The Louis Comfort Tiffany decorative glass collection includes a magnificent door from the Henry O. Havemeyer house in New York, created by the artist in 1890.

During all four seasons, a campus standout is the 70-acre Nichols Arboretum. In late May when I visited, North America’s largest display of heirloom peonies was in bloom — 300 plants. At the Matthaei Botanical Gardens visitors can stroll gardens and trails, the conservatory, and visit the campus farm.

Also located at the university is the Gerald R. Ford Presidential Library. Current holdings include more than 20 million pages of memos, letters, meeting notes, reports, and other documents. 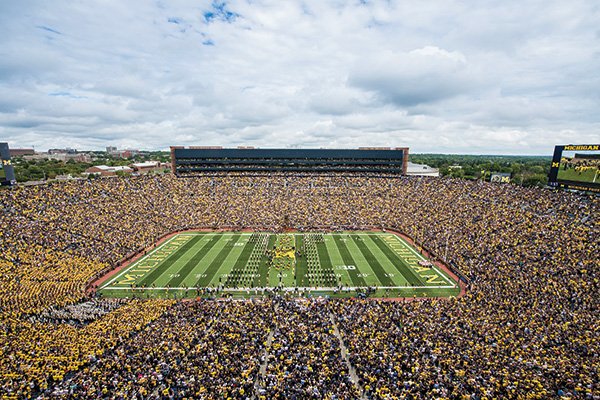 The Big House
When Michigan Stadium officially opened in 1927, it was the largest college-owned stadium in the nation with a capacity of 84,401. Numerous renovations and additions have increased the seating to its current 109,901 capacity, the largest stadium in North America. Sports journalist Keith Jackson, who died earlier this year, is credited with calling Michigan Stadium “The Big House.”

According to Bruce Madej, retired sports information director for the university, football games bring up to 10,000 tailgaters outside the stadium. Madej notes there is no advertising at the stadium. The massive electronic scoreboards at both ends are not sponsored; there are no digital banners or any signs of sponsorship.

Rosie Was Here, Too
While Evansville was building P-47s at its Republic Airways Factory, Ypsilanti Township (part of the Greater Ann Arbor area) was producing the B-24 Liberator bomber at its Willow Run plant. Today, visitors to the Yankee Air Museum on the site can tour Hangar One and the surviving section of the bomber plant. Guests also may book flights on one of two of the museum’s bombers or its open cockpit biplane. 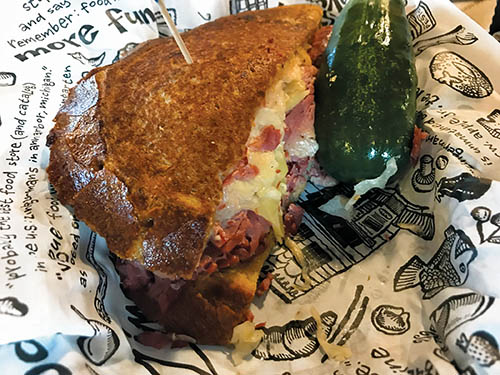 Most famous among Ann Arbor’s restaurants is Zingerman’s. Since its founding in 1982 as a small corner deli, Zingerman’s has grown into a community of 10 businesses with more than 700 employees and $60 million in revenue.

Kieron Hales, managing partner and executive chef at Zingerman’s Cornman Farms in neighboring Dexter, Michigan, believes food should be a visceral experience. With every dish he creates at the 1834 Greek Revival farmhouse he aims to create flavors that evoke emotion and feels of home. The property has been recognized by websites Brides and The Knot, as well as others, as one of the best wedding venues in America. 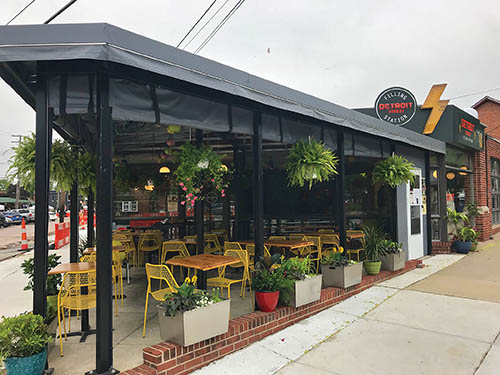 Michigan is the microbrewery capital of the Midwest, and the Ann Arbor area has more than its share of breweries. At the Ypsi Alehouse (Ypsilanti) try the Ypsitucky — a nod to one of the pre-prohibition styles of beer, Kentucky Common, and to the thousands of Kentuckians who came to work at the bomber plant.

“We met in the Ann Arbor Brewers Guild about 15 years ago,” says Howe. “Since then, we talked about the idea and decided finally either we would stop talking about it or open a brewery.”

For the last word on drinking in Ann Arbor, duck into a below-street-level speakeasy. The Last Word’s cultivated air of mystery begins with the lack of a sign; only a small subtle wall plaque and red door mark the entry spot.