There was a gaping hole in the roof of the building sitting at the corner of Third Avenue and Columbia Street.

Abandoned for many years and far from its former glory as a home for firefighters, Firehouse No. 8 was on the city’s auction block in 1995. Looking at the structure, with the roof collapsed and revealing the sky above, John Bassemier wasn’t sure it was a building he wanted.

But he decided to take a look anyway.

As he made his way into a small storage area in the back of the building, John stumbled upon a spike in a 2-by-4 piece of lumber that served as a coat hanger. As he leaned in to look at some writing scribbled on the wood, he received a pleasant surprise. 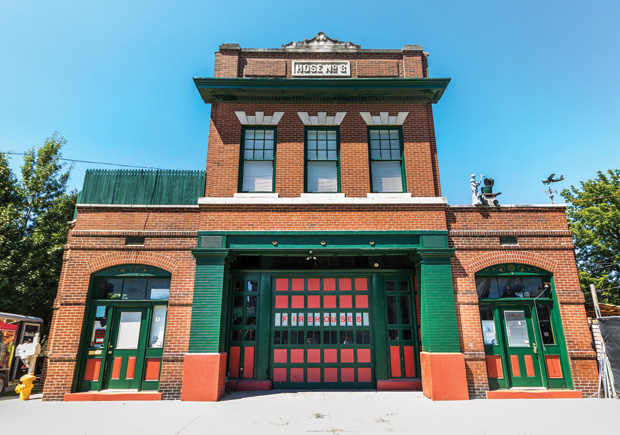 “My father’s name (Clarence Bassemier) was written in chalk on it,” says John, who along with his wife Diane founded Bassemiers Fireplace, Patio & Spa Inc. “I was excited, and that was kind of my sign to buy it.”

The firehouse recalls an age when fires were so common, cities like Evansville were required to have many stations — some so close you could take a short walk between them. Firehouse No. 8 began its duty in an area known as the STAR neighborhood in 1878. After servicing the city for 31 years, the original structure on Columbia Street was replaced with a new building erected in 1909.

According to Bassemier’s brother Joe (who also worked as a firefighter for the city), Clarence served Evansville as fire chief on two separate occasions — from 1948 to 1952 and again from 1956 until his death in 1959. In between these two periods, Clarence was named captain of Firehouse No. 8, also known as Hose House No.8. 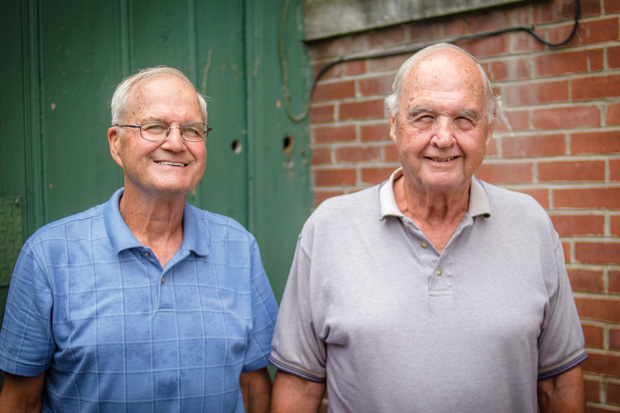 ▲ CIVIC DUTY Above, John and his brother Joe Bassemier remember the fire station from their childhood as they played there many times as children. Joe served as a firefighter himself. Their father Clarence, below left, was captain of the station for a time in the 1950s.

“Mayors appoint fire chiefs and when Hank Roberts came in as mayor in 1952, he named my father captain of the firehouse as a courtesy,” says Joe.

Joe and John fondly remember Firehouse No. 8 — the boys attended school at St. Anthony’s, just a block down from the station, and spent a lot of time there.

“I used to slide down the pole all the time,” says John. “I remember the alarm bell when I was a kid, too.” 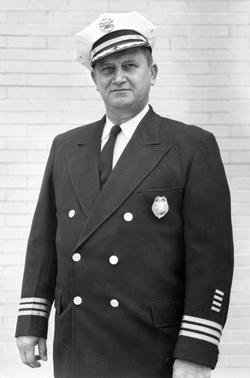 In 1955, when Clarence was captain, Evansville retired the fire station along Columbia Street in favor of a new firehouse on North Kentucky Avenue. Over the next 40 years, Hose House No. 8 would continue to service the fire department in various roles, according to Joe.

“It was a wonderful station. The fire department kept it up until a few years before 1995,” he says. “They used it as a supply station and area to work on the alarm systems, and later they stored the backup generator for the systems in the building.”

Finally, in 1995, after being empty for several years, the City of Evansville put it up for auction.

“The roof, the ceiling, the subfloor … everything was just falling through,” recalls John. “A support beam was broken at the back of the building and when you’d look up, you could see the sky.”

Over the last 22 years, he delved into several renovations of the building. The immediate fixes came in the form of a back wall repair (which John completed with help of his son James), a new floor in the upstairs living quarters, and a new roof.

As he worked, John began to find bits of the past the firehouse held on to over the decades. In addition to the two-by-four in the back bearing his father’s name, John found a collection of Civil Defense helmets (remains of the country’s fear of nuclear attack during the Cold War). The bell he remembered remained on the wall in the garage level, but the original fireman’s pole was gone.

The downstairs garage area and two offices became his space to store items he gathered over the years from a pinball machine and various tools to his father’s old firefighter helmet and a World War I rifle from his grandfather. The upstairs, however, John turned into an apartment.

In 2016, it became evident to John the apartment was in need for another upgrade. Hoping to appeal to a new crowd in the Downtown area, he brought in interior designer Cassie McDonough and real estate agent Rich Jobe. The task before John’s crew was to make the apartment reflect a more modern aesthetic while paying homage to its past. 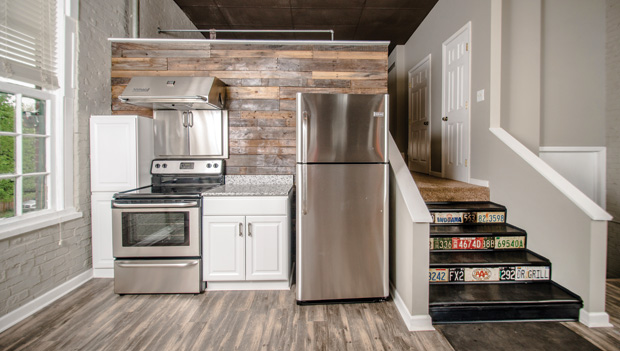 Jobe served as an idea man, throwing out suggestions such as incorporating many of John’s old wooden pallets onto the walls in the bathroom and kitchen. He also suggested taking old license plates and cutting them down to fit on the steps leading up to the bedroom.

“I knew John liked reusing materials,” explains Jobe. “Many of my ideas for updates came from materials I saw at the firehouse already.”

McDonough’s creativity came into play to tie all the elements together. The color scheme of whites and grays on the walls and trim complement the darker wood of the pallets and flooring. Her favorite room of the space is the bathroom, in which she added many design elements. 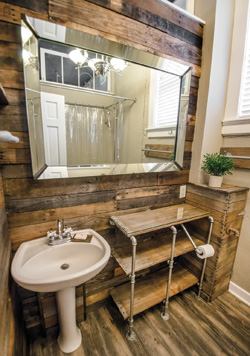 “I suggested pallet shelves to help balance out the space and a cabinet for storage,” says McDonough. “I also suggested putting high windows in the wall facing the interior of the apartment to make it feel less enclosed but still private.”

John also credits Jobe and McDonough with the thought to pay tribute to his business by using a stainless steel gas grill lid for the range hood over the stove. Brand new appliances, granite countertops, and new cabinetry in the kitchen also were marked off the to-do list. Carpenter Troy Schnoor of Troy’s Carpentry was brought in to help with work as well — from laying new flooring and painting the walls and trim to taking the wood pallets and fitting them on the walls. New recessed lighting also was incorporated throughout the space and outdoor lights were put in place to help with security.

The completion of the downstairs patio in August marked the final touches of the renovation, says John. And though he started the project intent on renting out to a new tenant, he soon came to the conclusion it was time to let the building go. Though Firehouse No. 8 has been a part of his life for as long as he can remember, after this renovation, he says it was time to pass the building on to the next person.

“I have saved it, preserved, and improved it over the last 22 years. Now, someone else can take it to the next level,” he says. “Its potential would only be limited to the future owners’ imaginations.”