The Tudor Revival architectural style, one of the most pervasive looks in the history of American home styles in the last 100 years, has inspired home building in rural, urban, and suburban communities for decades.

The Tudor style — named for the English royal dynasty that ruled from Henry VII in 1485 until the death of Elizabeth I in 1603 — is a revival of both grandiose early English architecture and simple folk cottages from hundreds of years ago. One simple way to denote the style is to point to its hipped gables and irregular massing — elements heavily borrowed in suburban home construction to this day.

A more detailed description would call attention to elements such as decorative half-timbering which mimics Medieval timber framing, large front-facing gables, front entries recessed in round or angular Tudor arches, stone trim, narrow casement windows with multi-pane glazing often grouped together, and massive chimneys prominently featured in the façade. Smaller Tudor homes may be referred to as English cottages in some architectural references.

In Evansville and the surrounding area, Tudor’s architecture became common in the 1920s. Today, the homes baring the structural elements can be found anywhere home building was active during that time. Urban neighborhoods such as Akin Park, Lombard Avenue, and Alvord Boulevard have great examples and have come to be known by the style.

If you include the suburban adaptations of hipped gables and asymmetrical façades, the style really is everywhere. Whether your Tudor or English cottage is large or small, new or old, the next time you hear Paul McCartney sing about renting a cottage in the Isle of Wight during the tune “When I’m 64,” you can imagine he may be referring to a Tudor home. 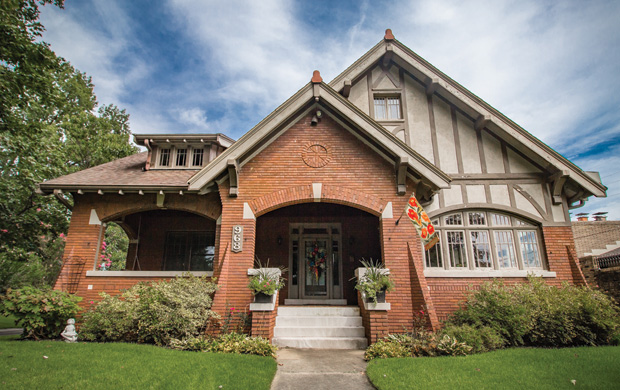