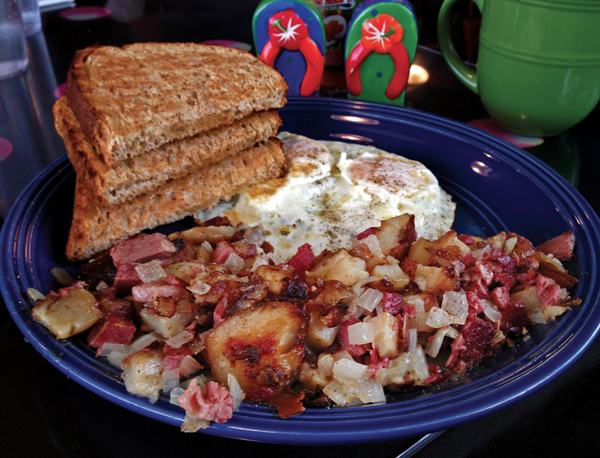 Bacon, bourbon, pizza, fried chicken, and beer — for many, these dishes and drinks elicit strong and almost “cultlike” devotion. Breakfast aficionados will gladly add freshly made corned beef hash to that list. Real sliced and diced corned beef, when beautifully blended with small cubed potatoes and onions in a hot cast iron skillet, creates a hash that can be a delicious start to your day.

Inlumi Café and Bakery, 4833 Indiana 261 in Newburgh, Ind., is a breakfast and corned beef hash Mecca. A recent post-Saturday swim practice breakfast with my son, Maxwell, found us promptly seated by a cheerful young hostess in this brightly decorated restaurant that was full of families. We were fortunate to get the last table, as obviously many others have discovered Inlumi’s, as well. The diverse menu offers much more than just corned beef hash (omelets are a specialty here), but we were all about the hash.

We aren’t the only fans of this food with a long history. Corned beef actually has nothing to do with corn, as some might think. According to The Smithsonian’s website, the British invented the term corned beef in the 17th century to describe the size of the salt crystals used to cure the meat. The salt crystals were the size of corn kernels. By corning, or salting, beef, residents of Ireland — where corned beef became especially popular— were able to preserve the meat.

But for you bacon lovers, Inlumi is a great choice, too. Max declared it to be not too salty, thick, and “cooked to perfection.”

In an area that seems to lack in traditional local breakfast places, this restaurant, along with the corned beef hash, are winners. Ask the regulars who were patiently waiting for an open table.

Oh, and in case you were wondering, the name Inlumi is born out of the friendship of owners and chefs Ligo and Tiffany Laws and chef Sam Wagoner. Becky Wagoner is the pastry chef. Inlumi is Mayan for “our place.” Make it yours, as well.

For more information on Inlumi Café & Bakery, call 812-490-9205 or follow it on Facebook for updates and daily specials.