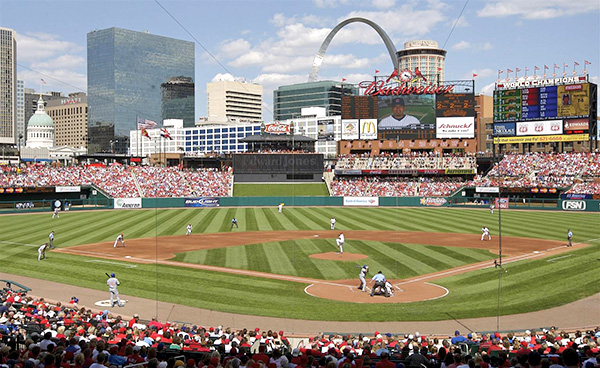 We were tucked in the comfy confines of the Hyatt Regency St. Louis at the Arch, having already visited the St. Louis Cardinals Hall of Fame Museum (in Ballpark Village) and enjoyed an hour-long dinner at the hotel’s Brewhouse Historical Sports Bar when the ballgame finally ended. After the first long rain delay, we decided to cut our losses and headed to Ballpark Village to check out the St. Louis Cardinals Hall of Fame Museum. (The Cards should have tried the same. They lost to the Cincinnati Reds 8-2. Manager Mike Matheny was fired that very evening.)

If you haven’t made that westward drive to St. Louis in a few years, now is a great time as the boys of summer head into the final games of the season. The nation’s tallest monument, the Eero Saarinen designed Gateway Arch, continues to welcome visitors to St. Louis as it has for 54 years. On July 3, the 630-foot-tall monument was reintroduced to the world with a new name, a new museum, and a substantial redesign of its surrounding landscape. Today, the Gateway Arch National Park is a memorial to Thomas Jefferson’s role in opening the West, to the pioneers who helped shape its history, and to Dred Scott who sued for his freedom in the Old Courthouse, part of the national park.