The next time you attend an event at the Tropicana Conference Center on N.W. First Street, turn and look at the flood wall running along the property line of the adjacent OneMain Financial building. The large expanse beyond was once a whole neighborhood that disappeared to the wrecking ball, urban renewal, and maybe a bit of social anxiety in the late 1950s.

The featured avenue was known as High Street. It angled off Fulton Avenue as did N.W. First Street; above it, emanating from what was Ohio Street, was N.W. Second Street. In the 19th century beginning at Court Street (which was called Division), streets were designated Upper (N.W.) and Lower (S.E.). The area between Fulton, Second, Court, and Riverside Drive was known as “The District,” or the “Tenderloin,” or — in the phrase used by young men on the search for adventure — “The Line.”

Beginning at Evansville’s creation in 1812, this area developed into a small maze of streets and buildings that became the city’s red-light district. From the Civil War to World War II, houses of prostitution existed here, operating 24 hours a day and owned by some of the most colorful women in our city’s past.

At its height in the 1930s, the district employed about 60 women. Many of the men who visited the growing city would stop on High Street. The city administrations in the 19th and early 20th centuries turned a blind eye toward activities there; the city’s political leaders and police felt it best to have vice concentrated in one area as it was easier to patrol and control. In 1919, a venereal disease clinic was opened and paid for with federal and state funds. Mayors and police chiefs made it their priority that the women who worked in the houses got medical care from the clinic, and the rumor spread that Evansville had the only government-supported red-light district in the nation.

Standing out from the usual rundown homes was the house operated by Nell Evans at 1 Walker St. (now North Fourth Avenue). Reportedly built by a well-to-do businessman whose wife refused to live near the district, it was the only house with a manicured yard and was said to be furnished like an upper-class home. It was known as the most expensive house on the street, and Evans guarded her privacy and girls closely. 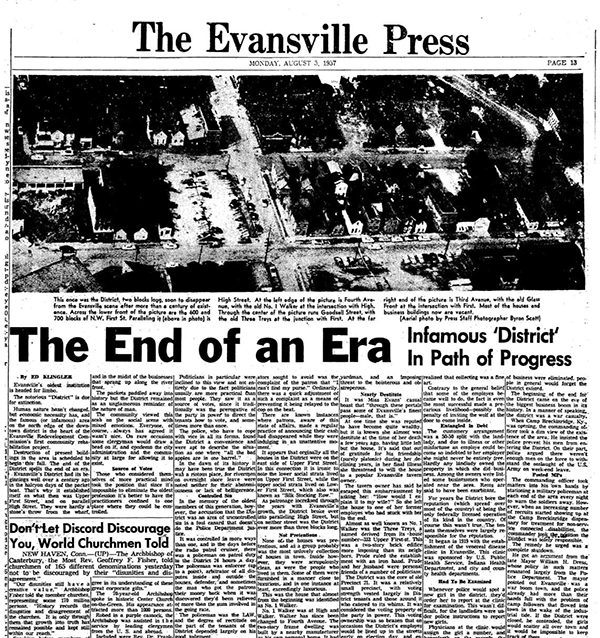 Evans had been disfigured by a jealous employee who threw acid in her face. She would wear a dark veiled hat when out in public, taking her girls to the department stores on Main Street to buy clothes. Women shopping downtown would instantly spot “High Street girls.” In an Aug. 3, 1957, obituary of the district in The Press by longtime business reporter Ed Klingler, he wrote High Street girls could be identified by their “downcast eyes, looking neither left nor right,” and they tended to wear “funeral black.” Evans passed away in 1949 and famously left her house to a former employee who stayed with her until the very end. Evans’ family protested and sued, but the will was left intact.

Another famous madame of the district was Sadie “Fay” Edwards, who died in 1923 and was originally the operator of the Three Treys, an unsavory tavern that stood at 333 Upper First St., which is now the parking lot across from the Tropicana Evansville Executive Conference Center. Edwards’ obituary declared she had once been worth nearly $200,000, but she lost her fortune as she aged and died at the old county poor house.

In this neighborhood also resided a community of African Americans, one of several smaller enclaves open to Black ownership in the days of segregation. Mixed-race neighborhoods were rare. The first Black high school, Frederick Douglass, was built in 1869 and stood at the corner of Clark and Carpenter streets where WEVV-TV’s studio now is; it was demolished when Lincoln School on Lincoln Avenue opened in 1928.

The district finally eroded during World War II when the military brass at Camp Breckinridge in Morganfield, Kentucky, threatened to make Evansville off limits to soldiers on leave if then-Mayor Bill Dress didn’t close High Street. Many war workers took over the old houses and drove out the madams and their girls to various other parts of town. (What is now Haynie’s Corner Arts District was one.) After the war, there was an attempt to restore the district, but it was never the same, becoming one of the worst slum areas in town.

The Evansville Redevelopment Commission raised federal dollars in the late 1950s to bulldoze everything, and High Street disappeared from maps. As Klingler wrote in 1957, “Soon the district will exist only in memory. High Street a thoroughfare two blocks long will be swept away in the march of progress. Parties of young men inspired by enthusiasm no longer will suggest ‘let’s do the line,’ because without the district, there can be no line.”

An Evansville history buff, Kelley Coures is the executive director of the Department of Metropolitan Development and the LGBTQ+ Liaison to the Mayor’s Office.