Homage to the Brave

Each November brings about a time of remembrance for those who fought and served in the U.S. armed forces.

Throughout Evansville’s cemeteries, many markers can be found indicating a person’s service to our country, including markers made of marble and granite. Oak Hill and Locust Hill cemeteries both lay claims to military plots, where rows of the white headstones rest.

Locust Hill’s most notable soldier is James Bethel Gresham, who was one of the first Americans to lose his life in World War I. In total, Locust Hill has two military sections — the second added in 1945 thanks to efforts of the Disabled Veterans Association.

Oak Hill is home to three military plots. A Veterans’ Memorial Plaza greets visitors at the bottom of the hill. On the far side of the main entrance rests the Grand Army of the Republic section, set off by the statue of a Union soldier high on a pedestal — this area originally was reserved for those who served in the Civil War but now includes veterans from all American conflicts.

One of the most recognizable plots, however, is Oak Hill’s Union soldiers’ burial ground. Guarded by short cannons and stacks of cannon balls, this military section is the final resting place of those soldiers who passed during Civil War battles or from wounds at Evansville’s Marine Hospital, according to superintendent of cemeteries Chris Cooke.

In total, Oak Hill is the resting place for 500 Union men, 24 Confederate soldiers, and 98 locals who perished during the war. In 1898, the city succeeded in having the Union veterans’ areas designated as federal property. Later in 1903, the Fitzhugh Lee Chapter of the Daughters of the Confederacy added a monument to remember southern soldiers. Six years later, a Union memorial was added. 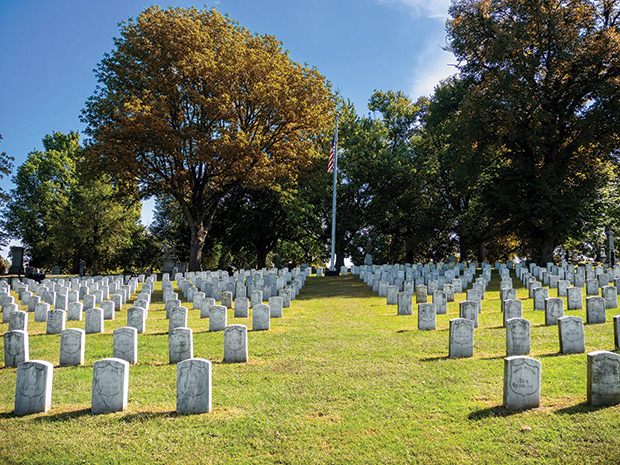