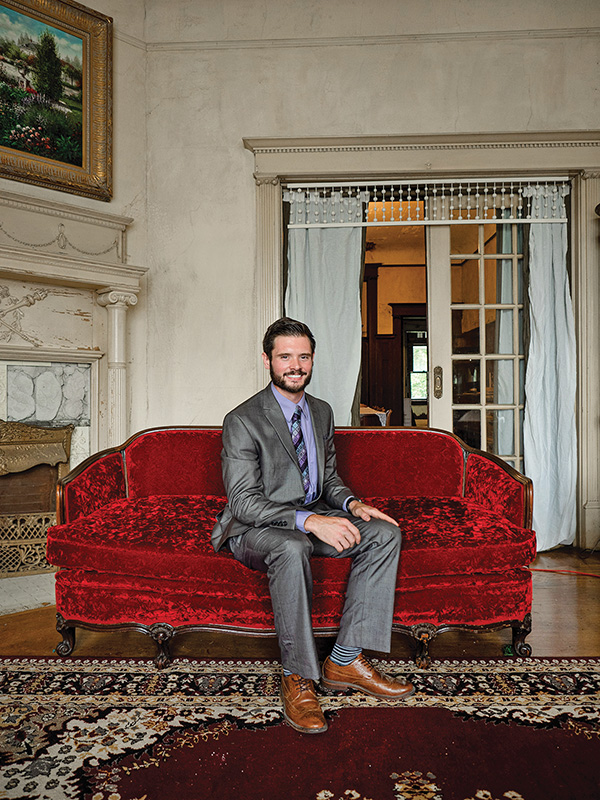 Selling historic homes in Evansville is a far cry from working in computer science — but for Lucas Neuffer, it has been the perfect career path.

The New Harmony, Indiana, native originally started his studies at the University of Southern Indiana in computer sciences, but quickly realized it wasn’t for him. Neuffer finished his major, but continued on for a degree in German and classical Latin as well. However, he still was searching for more.

“I was interested in history, languages, and cultures obviously. So I thought, ‘What if I work with houses?’” says Neuffer, who is a realtor for F.C. Tucker Emge.

In the last three years, Neuffer has made a name for himself as a realtor who specializes in historic homes. With his organization, Evansville Historic Homes, he also works to share information he gathers on older properties through social media and a new historic walking tours venture he started in March.

“People are interested in knowing the history of these houses,” says Neuffer. “We have 13 historical districts here in Evansville, and most people don’t even know that.”

What is your goal with the Evansville Historic Homes organization?

Eventually to buy more houses for renovation — I have to complete the Cook Mansion first (Neuffer purchased the home on Fulton Avenue in 2017 and is renovating the property with S&S Elite Renovation). But I’m hoping to have an organization that primarily does restoration. Then I would like to do that with neighborhoods.

What do your walking tours involve?
I host them at 4 p.m. on weekends for an hour. Starting at the train beside the Evansville Museum of Art, History and Science, we walk down First Street all the way to Haynie’s Corner. I talk about architecture, and I like incorporating why the house was built the way it was.

What do you enjoy most about Evansville’s homes?
We just have such a wide variety of houses here and almost no one realizes it. The oldest home here was built in 1832. Sixty percent of homes in Evansville were built before 1940. But we have — that I can think of — almost every single architectural style from 1840 to 1970. I can’t think off the top of my head of another town (that is not famous for it) that has such architecture.