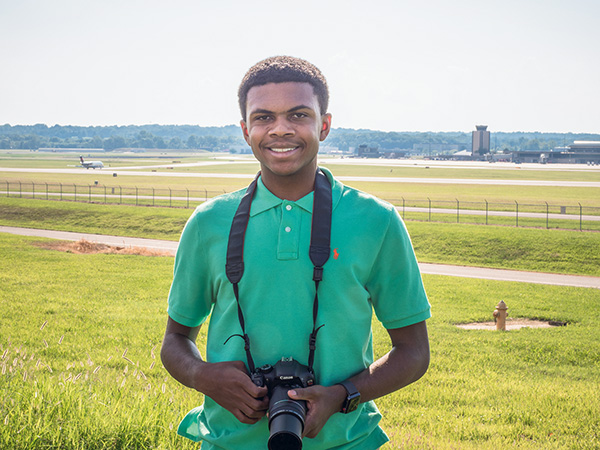 It is more about the journey than the destination for Blair Wells. The 15-year-old junior at Castle High School has had a passion for aircraft for as long as he can remember. Today, his dedicated hobby is documented through an Instagram page with more than 700 followers.

What’s been your favorite place to plane spot?
Honestly, right here [at the Evansville Regional Airport]. It’s a lot different than all the other airports I’ve visited. Most other airports are either midsize or large, and this one is special because it gets all the smaller, regional jets.

Do you have a favorite plane?
Yeah, it’s the McDonnell Douglas MD-80.

Why is that your favorite?
I’ve flown on it pretty frequently. When we go to some of our vacation spots, that was the plane that was flying a lot of those routes. My favorite thing about it is that the engine is very loud. Two months ago, I saw one here, which is unusual because they normally don’t fly here.

What is it about plane spotting that draws you to it?
It’s a rare hobby, but once you get into it it’s pretty exciting and exhilarating. I use the Flightradar24 app to track the route of any aircraft that I’m interested in. It also allows me to determine arrival and departure times of commercial flights. I’ve learned all this stuff about aircraft and their specs and their names for a long time, and there is so much more I want to learn. This will motivate me to continue spotting and researching. My goal is to one day obtain a private pilot’s license.