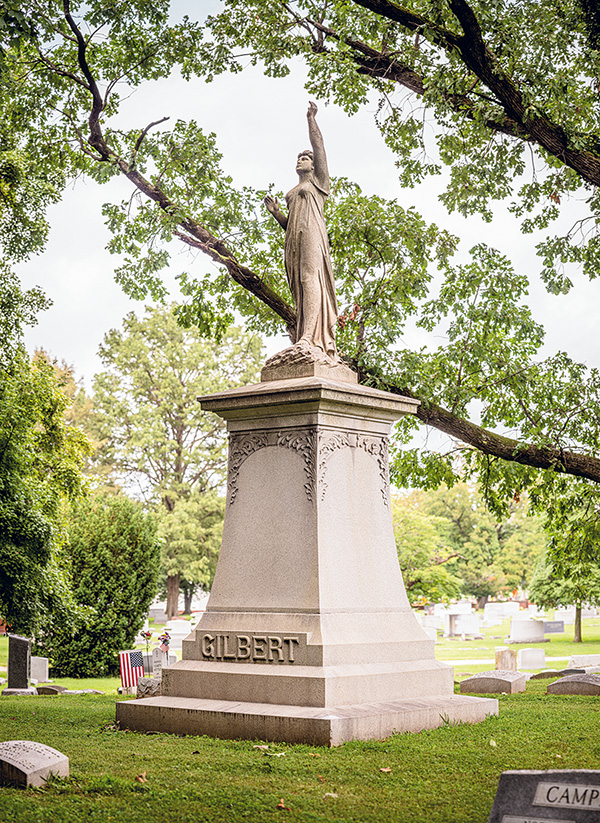 Along the western edge of Oak Hill Cemetery in section C, Lot 118 holds a lone grave along with a monument of a woman reaching toward the heavens. The name Gilbert is etched into the granite and the single member occupying the plot is Lillian Barrett Gilbert, who passed away on Halloween in 1908.

Lillian was the 18-year-old wife of Dr. William H. Gilbert. Dr. Gilbert was the founder of the Mary Jane Gilbert Sanitarium, which was opened in November 1897 in the North Main district of the city. Lillian, who died of pneumonia, was more than likely Dr. Gilbert’s second wife (the sanitarium was named for his first wife who also had passed). Dr. Gilbert laid his young wife to rest and eventually left the area, leaving Lillian to occupy the plot alone.

“I oftentimes reflect in this area over lunch for I feel it is one of the best hidden monuments in our facility,” says City Superintendent of Cemeteries Chris Cooke. “Just think of the broken heart the doctor must have had to build such a monument and then to leave the area.”