Daniel Craig’s career hasn’t turned out quite the way he envisioned when he joined the faculty of the University of Southern Indiana as an associate professor of music. Craig expected to have the job for a year or so and then move on. That was in 1990. Today, he’s happy to be approaching his 30th year on the West Side campus.

“Whenever I think it is time for me to pull up stakes and move, USI inspires me to stay a little longer,” he says. “New projects arise, new opportunities present, a family of supporters lifts me back to my senses.”

As the month of May approached, Craig was preparing the 46-member USI Chamber Choir for one of those opportunities — to sing on stage with other choirs at New York City’s Carnegie Hall.

“It’s definitely a once-in-a-lifetime opportunity,” says Craig, who also directs the USI Women’s Choir. “It’s one of the pinnacle performance opportunities for both professional and amateur performers.”

The chamber choir will perform May 26 under the direction of conductor Simon Carrington with the accompaniment of the New York City Chamber Orchestra. It was the second invitation USI’s mixed choir has received to appear at Carnegie Hall, the first coming in 2011. In between, there have been trips to Ireland and Poland to compete in international music festivals — with the USI Chamber Choir winning first place in two of them.

Craig says that is part of the mission of the university’s vocal music program — to sing in as many eclectic venues as possible while adding to the reputation of USI. Through international travel, Craig says, “there are kids who see the world is open to them.” 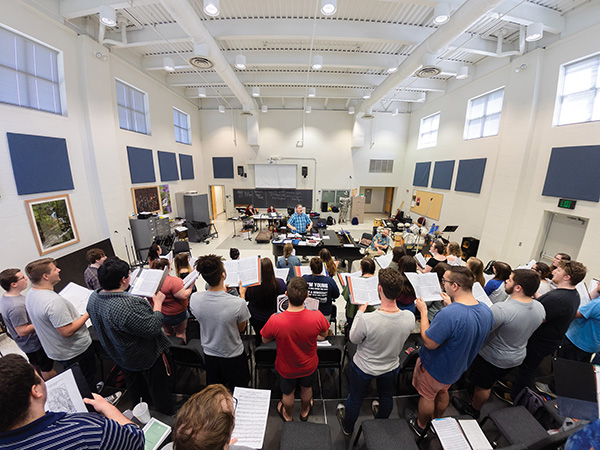 Besides serious choral compositions, the chamber choir also performs traditional Irish music, an outgrowth of Craig’s 30-year passion for the genre. The USI Chamber Choir has toured Ireland eight times since 2002, and it regularly performs concerts of Irish music in Evansville and the Tri-State.

The son of a Methodist pastor who moved from parish to parish while Craig was growing up in Kentucky and Tennessee, he appreciates the opportunity USI afforded him and his wife Clara to raise their daughter Jennifer in one location and one school system.

What are the qualities you look for when students audition for the USI Chamber Choir?

A lovely singing voice, an engaging personality, experience in choral music, passion for learning, and a willingness to take direction.

USI does not offer a major in music. How difficult does that make it to recruit and/or retain students for your performing groups?
Early on it was terribly difficult. Now with the advent of the Internet, social media, and the recognized growth of our program and its cultural offerings, we are experiencing a great deal of interest in students who visit the campus and those who choose to call USI their home.

What piece of choral music would you like the chamber choir to perform that it has not yet had the opportunity to do?
I do have a bucket list of pieces — Mozart’s “Requiem,” Ralph Vaughan Williams’ “Mass in G,” Bruckner’s “Te Deum.” The list goes on and on.

When selecting music for a choir to perform, what guides your choices?
The primary factor is the choice of text based upon a theme or flow of consciousness. Then I look at composers, ancient and modern. I listen and read to as much music as time allows. Then I look at how the new choir is shaping up based upon auditions and try to find a list of pieces that fit their size, level of expertise, and both teach the audience and the singer alike.

The music has to be inspirational, and it must be relevant to the human condition.

If you were to get up on a karaoke stage today, what would you sing?
Very unlikely that I would. But if I did, “Lonesome Road” by James Taylor followed by “How We Love” by Beth Nielsen Chapman.

After nearly 30 years as a music educator and choir director, how do you keep yourself engaged and invigorated year after year?
That is an easy one. It is the students. They keep me young and ever so challenged.