Local college football fans nowadays often watch bowl games from the comfort of their living rooms or favorite sports bars. Perhaps they travel to the game in California, Florida, and other sunnier locales. But there was a time when a seat at a bowl game was only a short drive away on Evansville’s West Side. 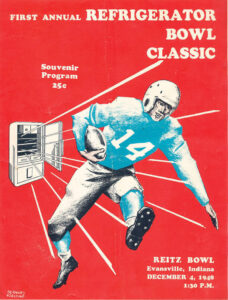 Each December between 1948 and 1956, Evansville’s famed Reitz Bowl stadium held a college football bowl game, sponsored by the Evansville Junior Chamber of Commerce, and designed as a fundraiser for the YMCA’s Camp Carson. At the time, Evansville had the moniker “Refrigerator Capital of the World” on account of the city’s booming post-war factories — including International Harvester, Servel, and Seeger — producing 3,800 refrigerator units a day. Appropriately, the football game was dubbed the Refrigerator Bowl, and the kitsch extended to the field, with players making their entrance by literally running through a refrigerator frame. 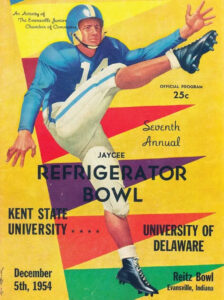 Evansville hosted the Refrigerator Bowl each of its nine years, but a local team won only two titles. The University of Evansville Purple Aces took home the 1948 and 1949 trophies over Missouri Valley and Hillsdale, respectively. Sam Houston State University in Texas also had two Refrigerator Bowl wins, and a regional squad from Western Kentucky University managed a victory over Arkansas State in 1952.

Enthusiasm and support for Evansville’s college bowl game waned, and by December 1956, Sam Houston State won the second of its two Refrigerator Bowl victories and the last bowl trophy. The Aug. 31, 1957, edition of the Evansville Courier newspaper put the development bluntly; citing a lack of public support or a new sponsor, the paper declared the “Refrigerator Bowl Game is Dead.”

The Refrigerator Bowl often factors into Evansville-centric trivia — including Evansville Living City View’s own 2022 quiz — and enjoys a wider part of obscure sports history nationwide. In fact, Bleacher Report in a 2011 article called the Refrigerator Bowl the No. 3 defunct bowl game with the best name. Evansville’s “Refrigerator Capital of the World” days are gone, but River City residents still reflect fondly on their short-lived bowl game series.

The Grass Is Greener