Located just twelve miles north of Evansville in the small village of Warrenton, Indiana, The Log Inn was once a popular stop for stagecoach travelers commuting throughout southwestern Indiana along Old State Road. Now recognized as Indiana’s oldest restaurant, patrons far and wide still come for its historic significance — after all, Abraham Lincoln once visited the same log room diners eat in regularly during a campaign tour for the Whig Party in 1844 — but locals see this as a destination for the home-style cooking and family tradition. 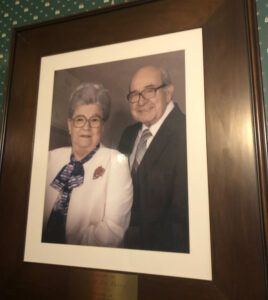 The menu, says co-owner Kathy Holzmeyer, remains mostly the same since her grandparents Pete and Victoria Rettig purchased what was then the Warrenton General Store, Tavern, & Dance Hall in 1947 and turned it into The Log Inn in 1965. Holzmeyer owns The Log Inn with her mother Rita Elpers, brother Daryl Elpers, and sister Trish Elpers.

“I don’t want to change anything because this is what’s made it The Log Inn,” she says. “This is what everybody knows. It’s simple fried chicken, family style. We don’t have anything fancy.”

Many of the recipes used today, such as the creamy milk gravy, were passed down from Kathy’s grandmother. 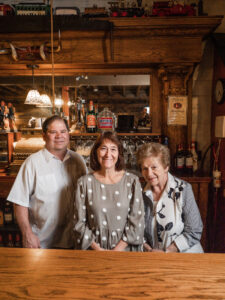 “She was a good cook,” says Rita, who along with her husband Gene purchased the restaurant from her parents in 1978. “It was her kitchen, and we knew that.”

The Log Inn would go through several owners throughout the next 27 years, including Henry Haub, who founded the nearby town of Haubstadt, Indiana. In 1867, then-owner Meier Heiman built a new store and mule barn in addition to the log room, which was then converted to living quarters. The building also would serve as a general store, tavern, and dance hall for many years.

Plaster was coated over the original log room, now called The Lincoln Room, and wouldn’t be uncovered until nearly 100 years later in 1963 when it was owned by the Rettigs.

“One night we had a terrible storm and weatherboards blew off on the side of the building and my dad noticed that it was logs,” Rita says. “So, then he went to work and had it remodeled. He took the plaster off and sanded it, so everything today is just like when it was built.”

Rita, who moved to Warrenton with her parents from Evansville in 1947, lived on the second-floor bedroom until she was married in 1961. The 83-year-old still bakes desserts daily, such as lemon meringue and coconut cream pies. 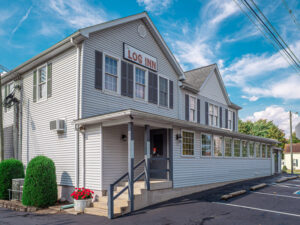 Its family-style, pass-around-the-table dinners are what separates The Log Inn from other restaurants. Served in large platters and bowls, each diner can choose their choice of half a chicken, ham, or roast beef to go with hearty portions of mouthwatering sides.

Just make sure not to hog the plates. Holzmeyer says oftentimes waitresses will ask for extra bowls and platters for a table to make sure there is enough for everyone.

Staying true to its home-style cooking, all dishes are made in-house. The most popular of which is the southern fried chicken, made to order and crisped to perfection using the restaurant’s 10 fryers solely dedicated to cooking the chicken. The fried chicken also can be ordered wings-only or legs-only.

“We’re consistent. Our food is consistent,” she says. “Very rarely would you come in the kitchen and me or my brother wouldn’t be in there. We want to keep it the same because if you get somebody else in there it’s different.” 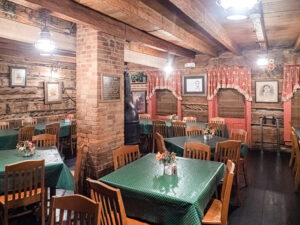 Though the restaurant has been owned by the same family since it officially became The Log Inn in 1965, this iconic piece of Gibson County history was put up for sale in February. The owners would change their minds just a few months later, taking the property off the market in April.

Holzmeyer says her family couldn’t walk from the historic property that has defined their legacy.

“We couldn’t let it go. This has been in our family for generations. I wouldn’t know what else to do and I really do like it here,” she says. “How could we walk away from something that’s meant so much to us? I missed my kid’s basketball games, I missed everything to run this. I just couldn’t walk away.”

This old-fashioned restaurant might be what your family needs to pull together this holiday season. Just don’t forget to pass the gravy.

The Grass Is Greener