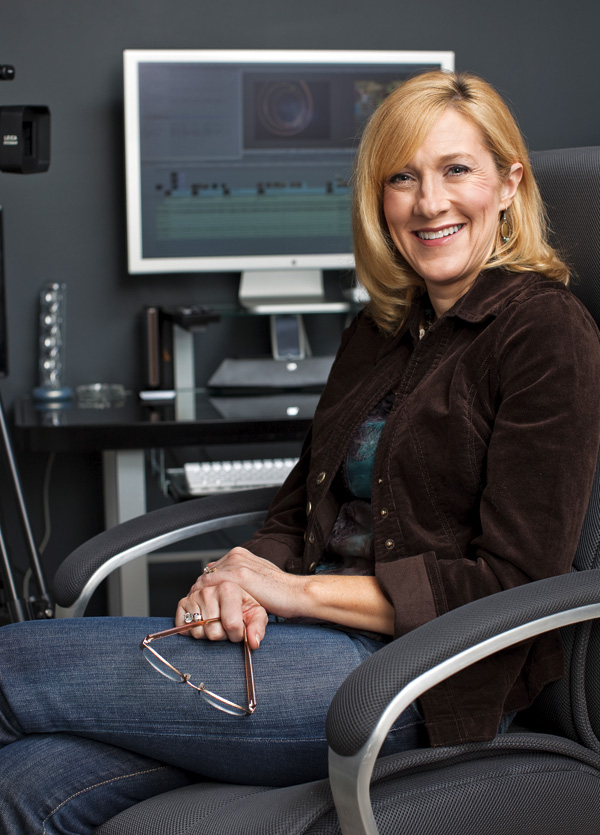 When Jane Owen first arrived at Montana State University, she had her eyes on a degree in business administration. Her freshman class catalog showed a list of television electives, which was the influence Owen needed. The Oregon native ditched business administration (much to her mother’s dismay) and focused on a degree in film and television production.

In college, she landed a job at KUSM, the first public broadcasting station in the Rocky Mountains. Then, she headed to San Diego and took on a range of industry jobs — camera operation, audio controls, and editing services — for documentaries and magazine shows.

“I’m more interested in people,” she says. “I think life has an interesting story most of the time.” Six years ago, her husband Steve became an attorney for Evansville-based Traylor Bros., a construction company he had worked with in California. Here, the mother of three (Bryn, 12; Blake, 10; and Laurel, 5) launched One Chick Productions, creating videos for nonprofits such as the Welborn Baptist Foundation, the Boys & Girls Club of Evansville, and the Junior League of Evansville. The latter’s series of public service announcements aired on WNIN and earned a regional Emmy nomination. Her current project, expected this spring, shares the beats of a popular drum line, the Boom Squad.

I watched MTV when it first came on the air. I think that was 1982. (MTV first aired on Aug. 1, 1982, with The Buggles’ “Video Killed the Radio Star.”) I was in high school. I don’t remember the first music video I watched, but I bought a music video compilation for $80. Can you believe VHS tapes were $80? I had to special-order it, and it was Duran Duran’s (self-titled) album. They had done videos of the entire album, and it was one of the first times that music videos had taken on more than a bunch of guys jumping around in a public access studio. They actually made a story out of their songs with nice cinematography and lighting. It fascinated me.

The stuff I was doing in college and some of the stuff I was doing for KUSM were stories about people. My senior project, which won an award, was called A Place to Rest: A Story of Hospice. I’ve filmed cattle brandings from the back of a truck on a ranch where they’re catching the cattle and branding them.

In California, I was pulling cable for a live show with Dana Carvey. He was at the height of his career with Saturday Night Live. Luckily, I wasn’t doing camera; I was just helping the camera guy. I couldn’t stop laughing, so he started to tell the jokes to me, and it made it hard to do my job. I was losing it.

When we moved here, I was so out of my element. I’ve been east of the Rockies, but I’ve never spent a whole lot of time. I had taken a 10-year hiatus raising my children, and I didn’t know what I was going to do here after the kids had gone into school. I had even looked at going back to college for interior decorating. Finally, I landed at the Junior League — this group of women who are just powerhouses. I thought, “I used to be good at something.”

The world behind the lens changes me. It changes my personality. It may not seem like it here, but I’m absolutely petrified to walk into a room full of people. I don’t know what to say to people. I usually say the wrong things, and I feel like an idiot. If I have a camera with me, I’m confident, I’ve got a purpose, and I’m fearless. I can ask just about any question. I can go up and talk to anybody.

Good stories are everywhere. They’re absolutely everywhere. I don’t feel like I need to look that hard. For example, I was sitting in a Junior League meeting once, and they brought in the Boom Squad. Just sitting in that performance, I thought, “That’s a story.”