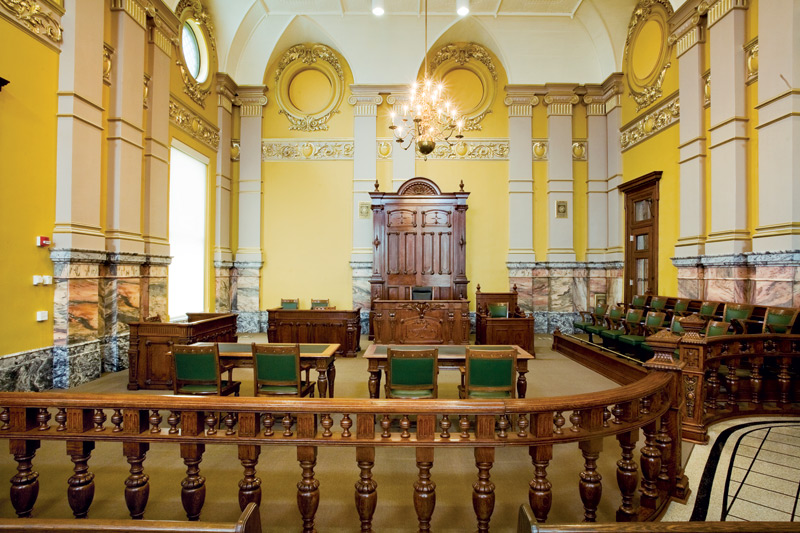 In April 2008, hundreds of lawyers filled what once was the Wedgwood Hall of the Old Courthouse. The meeting that day of the Evansville Bar Association served two purposes. It was the group’s annual luncheon, a chance to mingle among like-minded peers, but then-bar president Dan Carwile had chosen the recently restored room for a reason.

He wanted to show how a bequest from the estate of John and Evelyn Sanders (around $200,000) provided the thrust needed to restore the neglected Wedgwood Hall, a former library in the 1891-built courthouse. Another $100,000 from the Old Courthouse Foundation saved the room from its crumbling condition. “It looked like something out of the French Revolution,” says Kelley Coures, president of the Old Courthouse Foundation. “It was in such bad shape.”

The sight of the courtroom “almost brought me to tears,” says Krista Lockyear, the current bar president. Lockyear, an attorney with Rudolph, Fine, Porter & Johnson, never had served in a courtroom with such grandeur. Her colleagues in the EBA agreed the once-beautiful room with a soaring ceiling, limestone walls, and elaborate woodwork deserved a renaissance — and they could make it happen. 2011 marks the 100th anniversary of the EBA, Carwile explained, and this restoration project could be their celebration.

In late April, the fundraising efforts of the 539-member EBA (a $300,000 capital campaign) will bring a restored look to the old courtroom. But these lawyers’ labors produced more than a nice spit and shine.

Nearly two centuries ago, an argument between John Harvey and his wife escalated on May 8, 1823, and their commotion prompted a concerned neighbor to break up the disturbance. Harvey shot his neighbor for his troubles. Nine days later, police arrested Harvey for murder. He went to trial, a jury of his peers found him guilty on June 11, and two weeks passed before Harvey became the first man executed for a crime committed in Evansville. More than 1,500 people — roughly 12 times the size of the city’s then-population — arrived in the town square (what now is the corner of Third and Main streets) to witness his hanging, or as a reporter from the Evansville Gazette described it, watch Harvey be “launched into eternity.” Harvey was buried in the town square until the 1850s when a developer wanted to build a hotel above his grave, so excavators removed Harvey’s body. A local doctor took Harvey’s skeleton for a learning tool in his office. From there, where Harvey’s skeleton went is a mystery, but it reappeared one day in 1957 when a member of a West Side family asked leaders at the Evansville Museum of Arts, History and Science, something like this: “Hey, would you like a free skeleton?”

Today’s museum officials keep the skeleton — believed to be Harvey’s remains — in storage. They hired a forensic anthropologist to uncover the identity of the man. His tests showed the skeleton is about the same age as Harvey and experienced neck trauma. But with no known Harvey relatives and a skeleton with a missing vertebra, the anthropologist couldn’t conclude if this was the skeleton of the murderous John Harvey.

Harvey’s case — the first of only two executions in Evansville — is part of the EBA’s history, and when leaders of the EBA initially discussed how to celebrate the 100th anniversary, bar members wanted that history to be remembered. Member Todd Glass, an attorney at Fine & Hatfield, wanted more than a coffeetable history book. He thought an exhibition of sorts was in order, and this restoration of the old superior courtroom was the opportunity to make that happen.[pagebreak]

The superior courtroom was one of four rooms (including the Wedgwood Hall and the circuit and probate courtrooms) Kelley Coures thought was in dire need of restoration when he became president of the Old Courthouse Foundation in 2005. Coures is an admitted fan of “kooky, old Evansville.” He researches the city’s past as a hobby, and his interest in local history often translates into the storyline for the annual Reitz Home murder mysteries held every August in the historic First Street mansion. To Coures, the Old Courthouse is the temple for Evansville’s history, a defining landmark unlike any other structure in the world.

Even with such character and grandeur, the Old Courthouse almost met the wrecking ball in the 1960s when a community-wide effort bulldozed Downtown buildings as a means to replace historic structures with modern facilities. Architect Henry Wolters never thought such a fate might destroy his courthouse in the late 1800s. He designed it to last 500 years, barring natural calamity.

The high cost of demolition saved the building, but the Civic Center Complex emptied the courthouse of tenants. Today, the former library with robust green walls, renamed the Old Courthouse Ballroom, is an events facility for weddings and corporate meetings. This restoration also became Coures’ brochure, the real-life testament to potential donors that change was possible. He contacted Carwile and arranged a visit inside the courthouse.

Because Coures had secured estimates from Mike Shoulders, president of VPS Architecture, who headed the restoration of Wedgwood Hall, Carwile knew the superior courtroom needed $300,000 for repairs. Coures hoped EBA members could donate $25,000, a nice bump to start fundraising, but Carwile believed the total price tag was possible.

A few contemporaries at the EBA wondered if they threw so much money at the project, what would happen to the room? Wouldn’t it fall into disrepair again since, after all, Evansville has modern courtrooms used every weekday just two blocks away? The answer was no.

“We’ve basically been calling it a history project,” says Glass. Not only did bar members raise funds to restore the superior courtroom, they commissioned Bill Bartelt, a historian in Newburgh and author of “There I Grew Up”: Remembering Abraham Lincoln’s Youth, to research and compose the history of the legal system in Evansville. Bartelt’s discoveries begin in 1818 with the first district prosecutor and judge, but his work is more than a simple timeline. He covers aspects of local law such as the aforementioned city’s first execution and the assassination of Evansville’s first African-American lawyer, Ernest G. Tidrington, in the early 1900s. Bartelt uncovered nearly two centuries of courtroom stories with vibrant characters who would make the perfect cast for dozens of seasons of Judge Judy.

Those stories are part of the “history project” EBA members will display in the room adjacent to the superior courtroom. Inside, interactive kiosks will show video vignettes on Evansville’s legal history developed by students in an educational award-winning history class at Reitz High School. Alongside the videos are oral histories from dozens of bar members, and photos of the Old Courthouse, the jail, and other landmarks of Evansville justice will complete the room. The aim is to bring a museum vibe to the historic structure. It’s the reason EBA members believe the superior courtroom won’t fall into disrepair again. They aren’t keeping it around for beauty’s sake. It will be used, at the very least, for educational purposes.

Vanderburgh Circuit Court Judge Carl Heldt, a history major in college, was a strong proponent of the restoration. As the president of the Evansville Bar Foundation, EBA’s philanthropic arm, Heldt thought the courtroom could be used for its intended purpose once more. “Where you have non-security issues, you could still get a court reporter down there,” says Carwile. “I think we may see this space used more functionally. I hope all this builds upon itself, and we have more interest in the building.”

Carwile can see the Old Courthouse from his office in the Old National Bank headquarters on Main Street daily, and from there, he can count the number of landmarks Downtown such as Central Library, the Koch Family Children’s Museum of Evansville, and the Old Jail. “We have several structures Downtown that are just awesome,” says Carwile, “absolutely awesome, so I’m encouraged by what’s going on in our community. Good things are happening in Evansville, and this is a part of it.”