John Mills began home brewing in the early 1990s with an IPA-style beer called Sister Star of the Sun. He didn’t know much about brewing then, but the experience gave him a small taste of what would come.

“I remember drinking the last bottle of that batch and thinking how good it was,” says Mills. “I was just following somebody else’s recipe that was on the Internet. I didn’t know anything about beer recipes. But reviewing that recipe now — that thing had a lot of hops in it.”

In March 2018, Mills opened Maidens Brewery & Pub on Evansville’s West Side and began pouring up Maidens’ own brews in June that same year. He knew early on he wanted to name all of the beers after women and brainstormed ways to incorporate that theme into the name of the business. He struggled to find something that sounded right — until Iron Maiden started playing.

Not all of the beers are named after real women. Some of them are more for wit, like the limey, margarita-inspired beer called Rita, Shelly for a beer brewed for the Nut Club, or Miriam for a sweet potato beer. Others, though, do hold more of a sentimental value, like the Lori brown ale named for his wife. 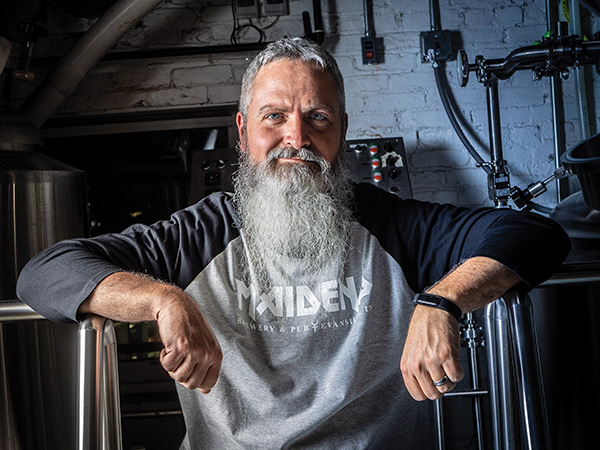 ▲ John Mills, above, has come a long way since brewing his first beer in the early 1990s, a hoppy IPA-style beer called Sister Star of the Sun. Now, Maidens averages 12 or 13 beers on tap at a time all brewed in house. Since opening, Mills says he and his team have brewed close to 50 different kinds of beer, all with witty women’s names to complement the style of beer.

“That was one of the first beers I made after she convinced me to get back into home brewing,” he says. “She encouraged me to brew, so I thought then maybe I’ll make something she would like to drink. Then that turned into the beer that won best of show at the Indiana State Fair many years ago.”

The idea to name the beers after women was more of a marketing tactic to increase female interest in Maidens’ beer selection, which Mills noted was often more favored by men. If women saw their name on a beer, they would maybe be more likely to try it. Mills says the intention of Maidens from the start was to make a wide variety of beer for everyone’s tastes.

“I get childlike giddy sometimes when it comes to beer,” says General Manager Ryan Terch. “Sometimes some beers will taste a little different. The subtle nuances will change your palate if you drink them in a different order. The thing I’ve always said when people say they don’t really like beer is they haven’t had the right beer yet.”

Brewer Nick Burch recalls a time when a group of seed farmers came in to Maidens as their last stop of a long bar crawl and exclusively drank Busch Lite. After talking with them for a while, he asked the group if they would try some of his brews. It was an instant hit. After tasting a half pint of Maidens beer, one of the farmers declared there finally was a beer he could drink and asked Burch to top off his glass. 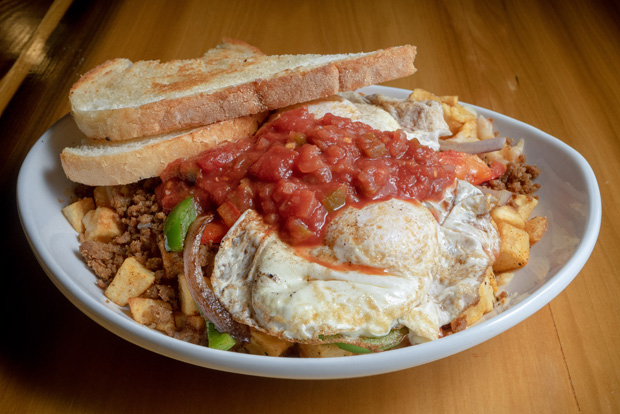 The mindset of offering patrons something new and unique extends to the restaurant’s pub-inspired menu. Maidens is the only restaurant in Evansville that offers Scotch eggs, hard-boiled eggs wrapped in sausage, breaded, and fried, and Mills took care to see what kind of restaurant was missing from Franklin Street’s food scene before opening.

Just like the beer line up, the food evolves, with popular standards that remain on the menu full-time. The fish and chips are a crowd favorite along with the signature burgers and sandwiches, like the Reuben and Cuban. The Wrathchild burger is served with pepper jack cheese, wrath sauce, avocado, fried pickles, and jalapeños, while the purgatory burger comes with provolone cheese, fried onion straws, sautéed mushrooms, and horseradish cream. All the sandwiches are accompanied with hand-cut fries, and Executive Chef Noel Bilbro says the restaurant goes through about 1,000 pounds of potatoes a week. 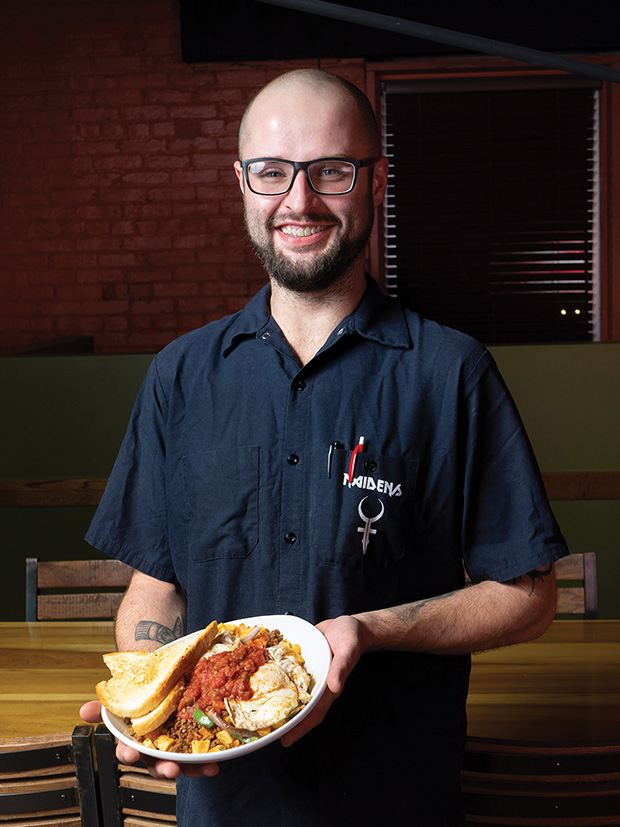 “Evansville seems to really enjoy fried food,” says Bilbro. “You have to pander to your demographic a bit, but it changes a lot. It’s always evolving.”

One of the biggest surprises for the crew at Maidens was how complimentary and supportive guests have been and how far people travel to spend time at the restaurant.

“I hear people all the time who are from hours away, and they came here just because they wanted the beer,” says Bilbro.

For fans wanting a taste of Maidens’ beer around the city, the brewery has their brews in area bars like High Score Saloon, The Rooftop, and Myriad Brewing Company and plans to distribute to other area restaurants.

The main focus, though, remains on introducing visitors at Maidens to new and unexpected beers. The key to this strategy is brewing in small batches that constantly rotate and having a wide variety of beers available. The bar averages 12 to 13 Maidens beers on tap at a time, and the brewery has produced close to 50 different beers since opening.

“It’s really the core theme of what craft beer is like now — all of these rotate and change,” says Mills. “It’s always different every time you go into a craft beer bar. The intention was to make different beers and introduce people to different beer styles.”