Miami in the Midwest 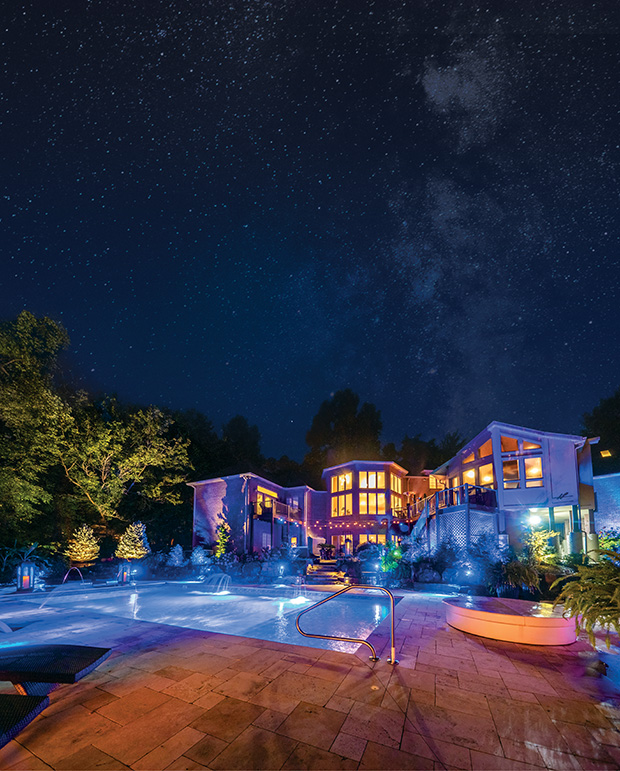 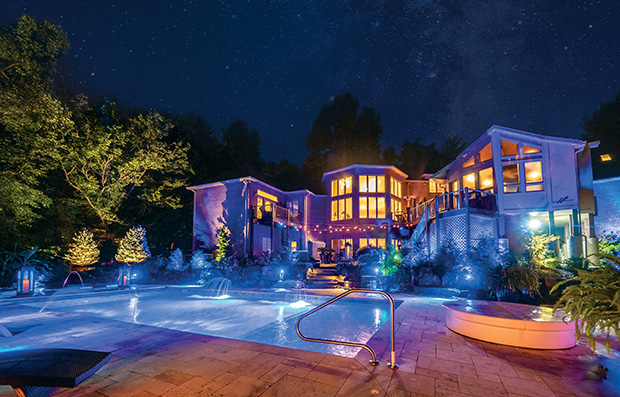 A cluster of woods gathered on a lot — that was the view Lynn and David Ogle, along with their children, would take in from the back windows of their home located in Newburgh, Indiana. In 2016, the couple decided it was the right time to change that view. 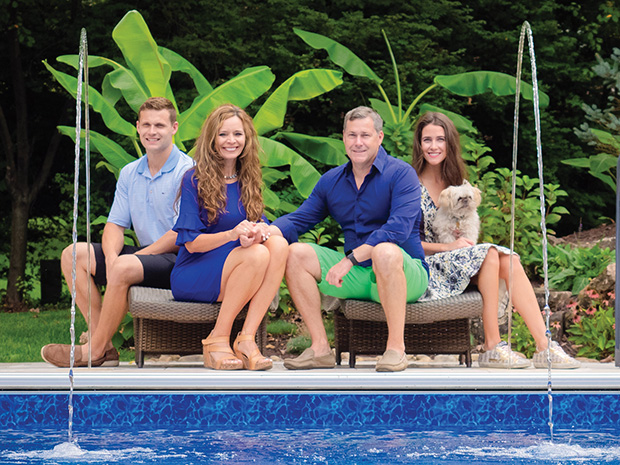 The family moved into their four-bedroom, five-bathroom home in 1997, purchasing the empty lot behind them as well to give them more backyard space. Four years ago, the couple thought it was about time to expand their home, starting with a large sunroom attached to the back of the house past the kitchen on the second floor. But the footprint of the home made the design a little tricky.

“We wanted a casual sitting area on our first floor and with the architecture, we just did not know how it would work,” says Lynn.

To tackle the task, the Ogles asked Popham Construction to construct the room, who brought in architect Mike Shoulders to create the unique addition that would match the home.

“The architecture allows us to view the outside with so many windows. The wood structures in the ceiling and the cupola in the middle of the room is something not normally seen in a sunroom,” says David. 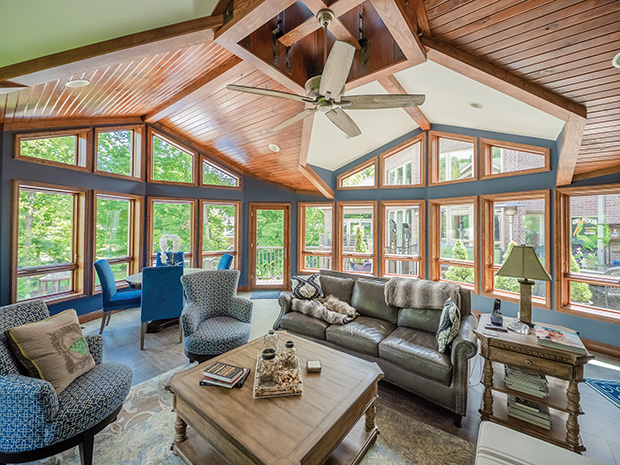 “When we relax in the sunroom, it allows us to envision being in a cottage or just on a vacation,” adds Lynn. “We love this room. Even though we’ve had this house for a long time, it’s like what did we do before we had it?”

But it’s not just the design of the room that makes the sunroom special. While David is a well-known dentist in the area, practicing out of Newburgh, he also has a creative streak he utilized in different elements of the sunroom and added deck. One of those elements was a bar to house his collection of bourbon designed by David and fabricated by Derick Higginson of Vintage Iron Designs in Evansville

“It is a one-of-a-kind piece,” says David. “I gave Derick a design concept and he created it.” 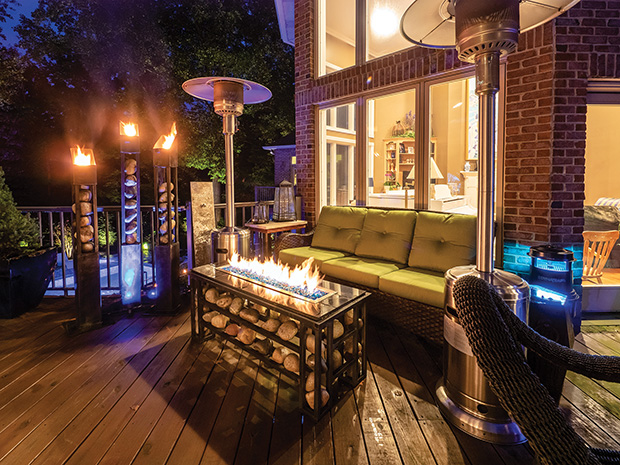 The sunroom construction opened new avenues for the Ogles to continue building a beautiful retreat in their backyard. The new addition allowed the family to reconstruct the top deck that laid just outside the sunroom. It’s been turned into a cozy nook, shaded by the original portion of the home and new addition, which allows Lynn, David, and their children to use it in all seasons. Several standing heaters on the deck were put together by David himself using his own welding skills and allow the Ogles to entertain even in the winter.

But the Ogles weren’t done just yet. Staring out at the lot behind the home from their new sunroom, they began to wonder what else they could do in their backyard space.

“When we finished the sunroom and looked out at the woods, we wondered what we could do. Then David said, ‘What do you think about doing a pool?’” says Lynn.
So they did. 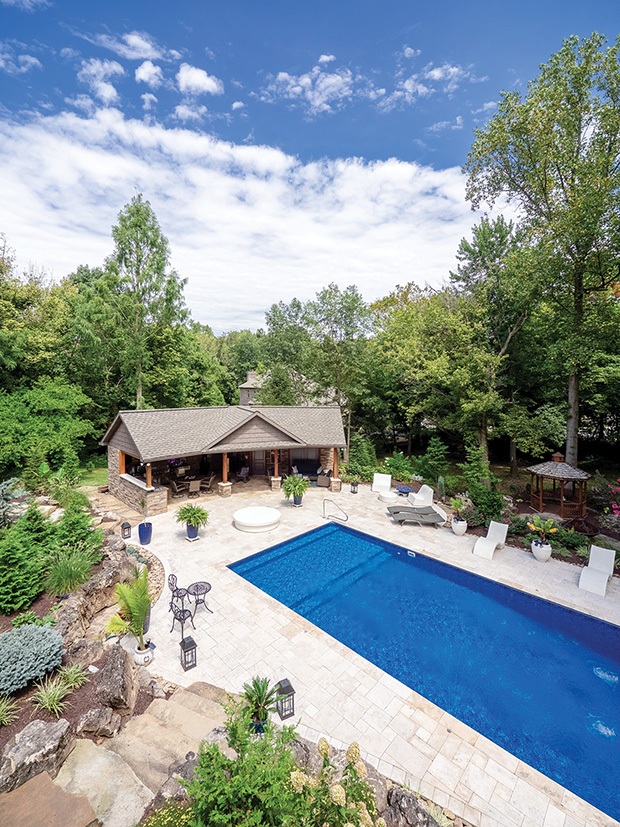 Starting in January 2017, the couple began to prep their lot for not only a pool but a pool house as well. Ambrose Construction came in to complete construction on the inground pool and the pool house. For the beautiful landscaping surrounding the backyard area, Aching Acres came in for the planting, as well as the creation of the rocks, walls, and pathways.

“Town and Country Pools helped us with the pool equipment, including the colorful fountains and lights within the pool,” adds Lynn.

“We gave it blue lighting, to give it a moonlight look. And we thought the blue looked very nice,” says David. “It’s a whole different atmosphere at night here.”

The pool house is the perfect addition for outdoor entertaining as well, equipped with a kitchen area, a bathroom, dining seating, an outdoor shower, and plenty of storage. It’s been the perfect piece to complete the backyard pool area, say the Ogles. 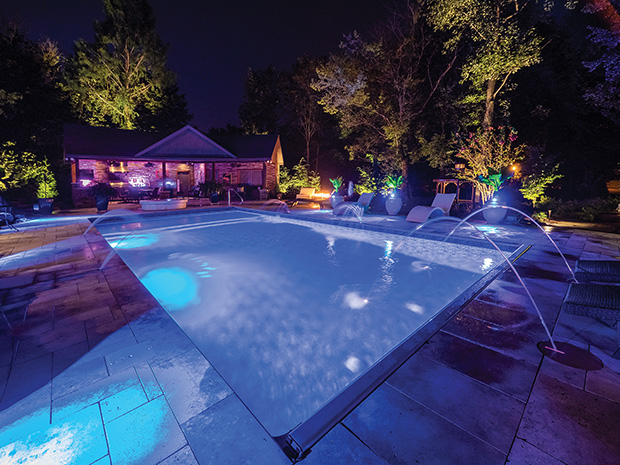 "It was originally smaller in the plans, but with suggestions by Matt Ambrose, the pool house was made larger and we’re so thankful we followed his recommendations,” says Lynn.

By Memorial Day weekend in 2017, the project was completed and the family had an oasis to share in their once wooded yard. The new space has allowed them to entertain in the last three years and continue to add pieces to the scenes to make it their own. Through the years, David has continued to exercise his creativity through the gardening and more ironwork pieces. Overall, the feel of the backyard gives the Ogles a sense they are elsewhere — not in the woods of southern Indiana, but maybe at a boutique hotel with a Miami vibe.

“We feel like we have created Miami in the Midwest,” says Lynn. “And we can just go in our backyard and feel like we are on vacation.” 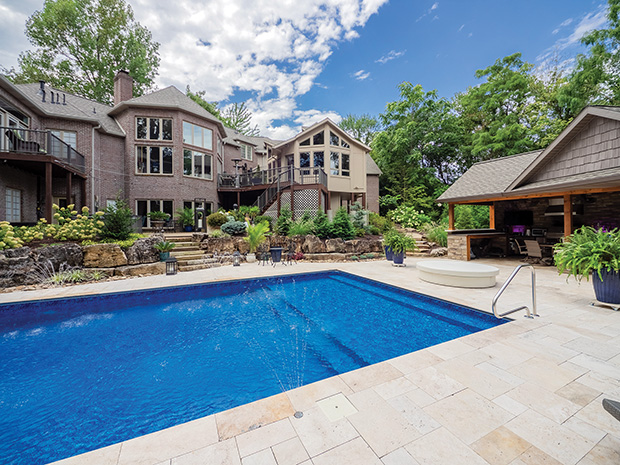