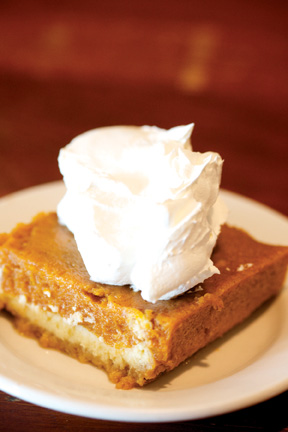 One Thanksgiving in the mid-1990s, Larry “Bubbles” Pollock’s mother whipped up a three-layer dessert topped with whipped cream. Bubbles loved it and asked for the recipe to serve in his restaurant, The Pub (1348 E. Division St.).

Fifteen years later, the sweet dessert, known as the Pumpkin Delight, still is a perennial favorite for Pub-goers. On a foundation of buttery-sweet graham crackers rests a dense, velvety cream cheese. The title layer is spongy with flecks of dark brown throughout the giveaway orange pumpkin. A spicy, almost liquor-like flavor adds a dimension to the bite. When topped with whipped cream, the overall effect of the chilled dessert is light.

In the fall, The Pub sells around 70 whole-sized pans of Pumpkin Delight ($4 a slice) for customers to take home to their families, but it’s available year-round. “It’s just yummy,” Bubbles says. “It doesn’t make any difference what time of year it is.” Below, he shares the recipe with readers.