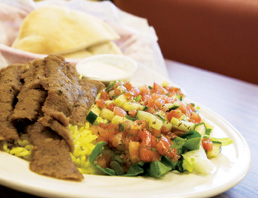 Housed in a former Lee’s Famous Recipe Chicken joint on Lincoln Avenue, Manna Mediterranean Grill still carries a few trappings of the building’s fast-food past: Diners order and pay at the counter, drink from Styrofoam cups, and carry their meals on plastic trays. But a restaurant’s atmosphere doesn’t define its food, and since opening their Mediterranean eatery last summer, owners Amjad and Kristi Manna have crafted a menu that’s unfailingly fresh.

When the Newburgh couple searched for a place to buy gyro meat, nearby options just weren’t good enough, says Amjad, who credits his uncle Raffi Manna (owner of Raffi’s Restaurant on Burkhardt Road) for teaching him how to succeed in the business. So the Mannas turned to a Chicago vendor that provides “more tender meat and better quality of meat itself,” says Amjad. The meat also is halal, or acceptable under Islamic dietary laws. That’s crucial for much of the restaurant’s clientele, Amjad says, including local Muslims and international students attending the University of Evansville.

The lamb and beef gyro plate ($9.95) features slices of gyro meat layered atop a fragrant bed of aromatic basmati rice, tinted yellow from turmeric and other seasonings. The meat is tender but not greasy, and delicately charred edges add a contrast of crispness. The entree also comes with a choice of salad (I tried the Mediterranean salad: romaine lettuce, chopped tomatoes, and cucumbers with a dressing of lemon juice, olive oil, and salt), pita bread, and tangy tzatziki sauce, a blend of yogurt and cucumber made in-house.

Like the rest of the menu, the items on the gyro plate don’t contain preservatives or come from cans, says Amjad. Fast food, this isn’t. Instead, he says, “we’re trying to be the neighborhood restaurant.”