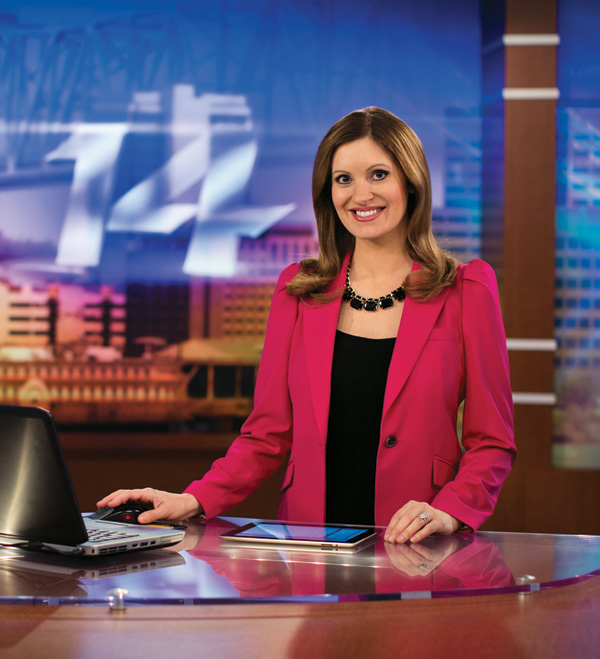 She rises early, very early. For morning WFIE news anchor Beth Sweeney, 35, working before the sun fills the sky has become something of a routine. This Liberty, Ky., native and graduate of the University of Kentucky grew up wanting to be an actress. She now resides in Evansville, is married to Reed Kress, a chiropractor, and is 14 News’ morning smile.

City View: Tell me a little bit about yourself.

Beth Sweeney: I majored in journalism, and then worked in Lexington, Ky., for a cable channel. I then moved out to Los Angeles and worked for KTLA, which is now the CW channel. It was the WB when I was there. I did traffic reporting up in a helicopter and just knew that I really wanted to anchor, and to be able to do that I’d have to come back to a smaller market. So, I moved back home and started sending out resume tapes, and this job came available, and I came over and got hired and I’ve been here for eight years now.

CV: How do you remember your first stories?

BS: One of the first stories I covered here in Evansville was the November (2005) tornado, eight years ago. I started anchoring the day after that tornado hit. That was my first week in the anchor chair with 14 News Sunrise. I did a couple of stories with survivors of the tornado, an elderly couple in Newburgh who escaped their home. They were able to walk out of there alive, which was amazing. And of course, those memories of that, and how the community came together right after I’d just moved here. It really just made me feel like Evansville was the place I wanted to be in.

CV: Was there a moment when you realized you wanted to be a news reporter?

BS: My dad would wake me up on Saturday mornings and say, ‘Hey, we’re going out with a group of kids to build this wheelchair ramp.’ Or ‘We’re going to help this person with home repairs.’ So I’ve always been very service minded, and I felt like journalism was another way to do that in a job environment — to help inform people, and to let them know what is going on, and hopefully ignite them to become active citizens in their community.

BS: I get up at 2 a.m., take a shower, and head straight to work. Immediately when I get here, I start writing for the show. We have two producers overnight and of course they come in earlier in evening, so the rundowns for our show are pretty much set up, and I just start plugging in stories. I start writing stories, I start checking wires, I start checking the Internet, to see what’s happened over night for anything that is new that we can provide to viewers, because we are sometimes the first thing they see or hear when they wake up in the morning. We are on from 4:30 a.m. to 7 a.m., and then we do local news cut-ins during the Today Show, up until 9 a.m. After that is over I work on a story for the 5 p.m. newscast that is recorded ahead of time and anchor our midday show at 11 a.m. So my day typically ends around 11:30 a.m.

CV: Why did you come to Evansville?

BS: Evansville is only about 31/2 to 4 hours away from my hometown. WFIE is a legendary station and a great place for you to really learn how to anchor and learn how to be a good journalist. And I think that says something for WFIE and to the whole city of Evansville. When I came here I really learned what they were talking about. When you have greats like David James and Ann Komis who are mentoring you, you can’t ask for anything better than that.

Voice of the City