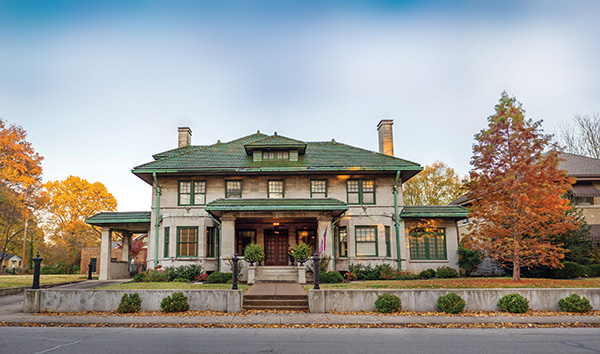 We searched, drove, walked, and scouted the nearly 48 square miles of Evansville streets and neighborhoods to find homes that caught our attention and struck us as the most beautiful in the area. Since August of last year, we have been out and about, camera and notepads in hand, talking to residents and snapping photos.

In this first Most Beautiful Homes feature, the following selections showcase the majestic historic homes and stunning newer builds that make up the residential landscape of our city. While our list of 10 scratches only the surface of Evansville’s architectural displays, it represents the unique styles found throughout the city.

Location: Bayard Park
Architect: Designed by Troutman & Capelle and built in 1922
Style: American Foursquare
Significant Stats: Five bedrooms, two and a half baths, 4,002 square feet
Why it stands out: From the green terra cotta tiled roof to its exterior of Indiana ashlar limestone, this Bayard Park home is memorable even aside from its impressive history and interior. Built by Evansville lumber businessman Daniel Wertz, the home stayed among Wertz’s descendants until the current homeowners Tom and Connie Lantz purchased the property in 1996. “It’s all the original woodwork in there,” says Tom. “Wertz used all kinds of mahogany, quarter-sawn oak, and ebony and mahogany inlays.” The symmetry of the home also is striking with its porte-cochere on the left, wing off the right, and pair of gargoyles perched above the bay windows. 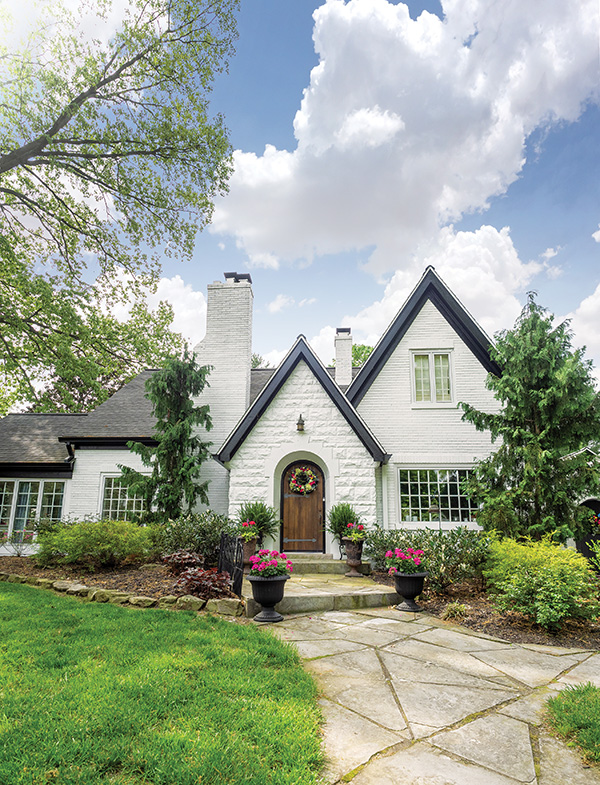 Location: East Side
Architect: Unknown and built in 1937
Style: Tudor
Significant Stats: Three bedrooms, two and a half baths, 3,206 square feet
Why it stands out: Homeowner Joyce Hubert wanted the best of both worlds when she and husband David moved into their cottage home in 1987. A country girl at heart, she wanted a property that felt rural with the conveniences of city living. “It has almost 2 acres, so the backyard is just like a park,” she says. “It’s like living in the country, but you’re close to everything.” While the front exterior has not changed structurally, the Huberts brightened the home with a coat of white paint from its previous beige. They also glassed in the previous porch to make a sunroom and added on a larger screened-in porch. “When we remodeled, I didn’t want it to feel like an old home we built on to,” says Joyce. “I love the character of old homes; I love the history of it.” 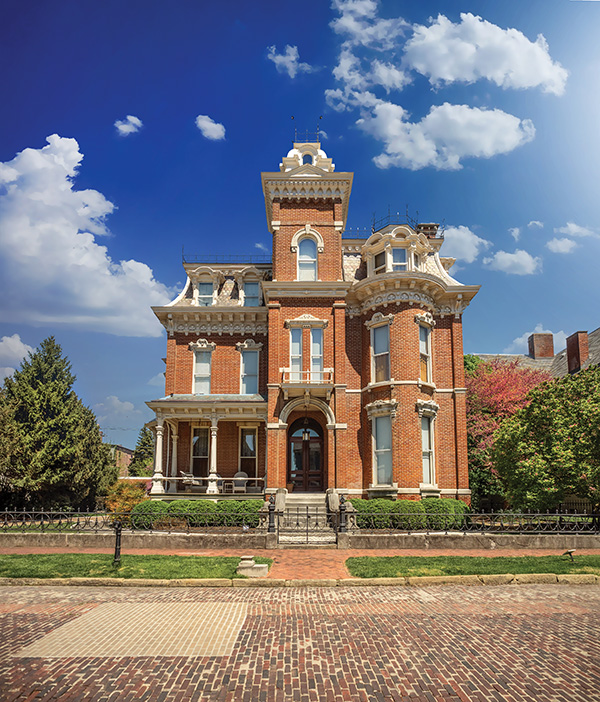 Location: Riverside Historic District
Architect: Finished in 1880 by Boyd and Brickley
Style: Italianate
Significant Stats: Four bedrooms, two and a half baths, 7,228 square feet
Why it stands out: Built for the prominent dry goods merchant Watkins F. Nisbet, this historic property is one of the most iconic homes in Downtown Evansville. Its Italianate style with French Second Empire influences is the prime example of great Victorian architecture in the region. “They were borrowing a little bit from different styles,” says homeowner Dr. Tim Crowley. “It was common about that time in the 19th century.” Tim and his wife Sue were drawn to the property because they were looking for a Victorian-era home that would complement their antiques and decorative art pieces. The Crowleys moved into the home in June 1983 and were tasked with converting the house, which had been sectioned into apartments, back into a single-family home. “I’m proud we’ve been able to preserve the house, improve it, and keep it in use,” says Tim.

Location: East Side
Architect: Unknown and built in 1914
Style: Colonial
Significant Stats: Four bedrooms, four baths, 6,468 square feet
Why it stands out: This house along Lincoln Avenue hasn’t always called its current spot home. According to owners Pete and Carrie Mogavero, the Cunningham family moved the original house in the early 1980s from its former location near the corner of Green River Road and Lincoln Avenue. Shortly after, the Mogaveros purchased the home and have been there ever since. “We were attracted to it for its charm and location to family,” says Carrie. The Mogaveros would add on to the home in 1990 and also changed its exterior color from white to a beautiful yellow. “She wears it well,” says Carrie. 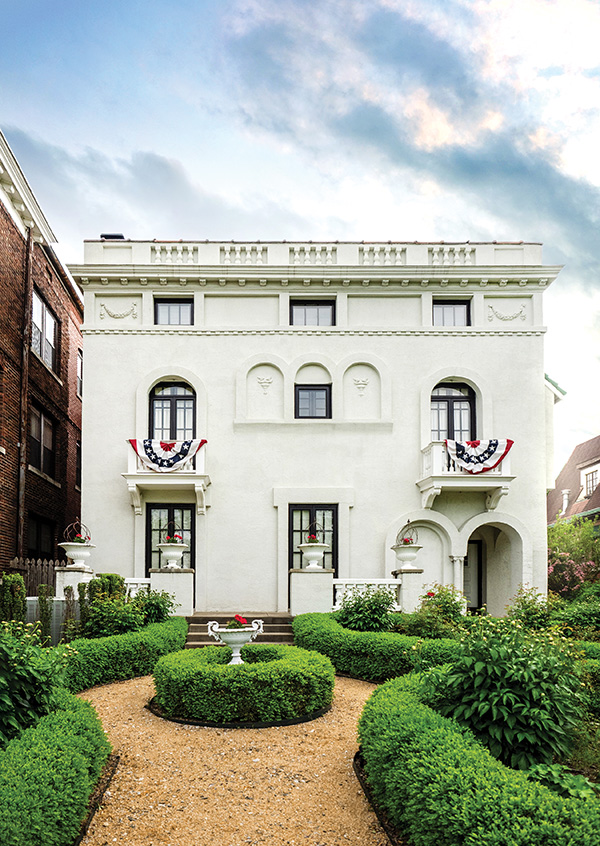 Location: Riverside Historic District
Architect: Designed by F. Manson Gilbert and built in 1909
Style: Italianate
Significant Stats: Five bedrooms, three bathrooms, 2,727 square feet
Why it stands out: The historic house along Sunset Avenue has not seen many owners in its lifetime — the current residents have called it home since 1984. But the unique Italianate structure first served as the home of famed Evansville architect F. Manson Gilbert. “He had lived in Italy and built it to look like a palazzo he was in when he lived in Venice,” says the current owner. The interior of the home boasts old marble floors and interior room windows often featured in Italian architecture. The unique home also has served as inspiration for Christmas cards for a previous owner, who was an art teacher. “We own a lot of those cards, and many people around Evansville own some as well,” says the owner. 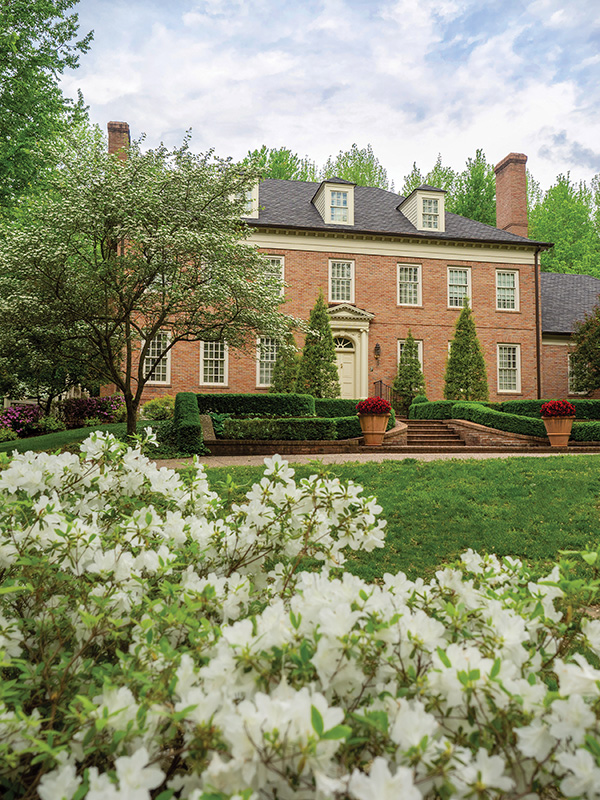 Location: McCutchanville
Architect: Designed by H.G. McCullough and built in 1989
Style: Georgian
Significant Stats: Four bedrooms, four and a half baths, 5,500 square feet
Why it stands out: According to homeowner Dan Whitehead, his Georgian home has the nicest front door in the city of Evansville. Made from hand-carved rosewood, the door is modeled after a home in Baltimore, Maryland. “One year a friend of ours sent us a Christmas card, and one of my kids said, ‘Dad isn’t that our front door?’ says Whitehead. “I looked at it, and it was a Christmas card made from the original of the [door] ours was taken from.” The biggest changes to the home since Whitehead purchased the property in 1999 were finishing the basement, replacing the roof, and adding a home theater. “When we bought it, my favorite thing was, inside and out, the attention to detail,” he says.

Location: East Side
Architect: Original designer Harry McCullough and built in 1965. Renovated in 2008 by H.G. McCullough Designers
Style: Georgian Colonial
Significant Stats: Four bedrooms, five and a half baths, 5,826 square feet
Why it stands out: Named “The Bell House” by former owners Robert and Barbara Keller, this home originally was built in 1965 but benefits from an extensive renovation process that restored it to its former glory in 2008. “We have benefited being able to live in a home with great character of a design period that still offers modern comfort and conveniences,” says Jeff Anderson — he, his wife Nancy, and their family moved into the home in 2016. “The home has been very accommodating to developing great family and friend gatherings.” Along with the character of the home, the Andersons also enjoy its close proximity to East Side parks and green spaces. “We have enjoyed the neighborhood and convenience of its location,” says Jeff. 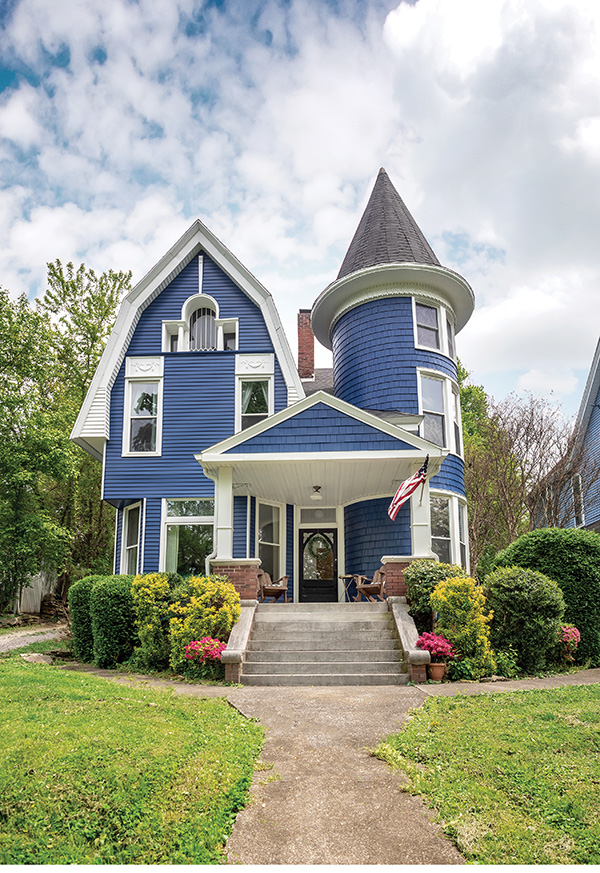 Location: Downtown Newburgh, Indiana
Architect: Unknown and built in 1899
Style: Victorian
Significant Stats: Four bedrooms, two and a half baths, 2,500 square feet
Why it stands out: Andrea Whitehead had her eyes set on this historic Newburgh home as early as 2011. But it wouldn’t become a reality until 2015, when she and her husband Christopher Lunn purchased the home and immersed themselves in a large renovation project that took a year. Originally built near the turn of the century for Dr. Robert Slaughter, Andrea’s and Christopher’s renovations included electrical, a kitchen remodel, installing historically accurate stairs and railings, and much more. The unique Victorian architecture and spot on the hill are some of Andrea’s favorite aspects of the home. “The tall proportions of the home perched on its hilltop are so appealing to me,” she says. “And I knew painting it a vibrant royal blue would only enhance its scale.”

Location: North Side
Architect: Designed by Alfred E. Neucks and built in 1928
Style: English Tudor
Significant Stats: Four bedrooms, three and a half baths, 3,354 square feet
Why it stands out: Nestled off Stringtown Road in a grove of trees across from the Evansville Country Club, this gated home combines elegance with touches of fairytale whimsy through its red granite façade, rounded entryway, and lead-paned glass windows overlooking the front balcony. Homeowners Stephen and Olivia Troyer first looked at and purchased the home when they were dating and have lived on the property their entire marriage. “The house has had four or five renovations throughout that period,” says Olivia. While the front of the house is completely original, the Troyers added an elevated stone terrace on the back about 25 years ago and, on the opposite side of the home, a four-room addition. “It’s really served us well, and it fits perfectly with the style of the house,” she says. 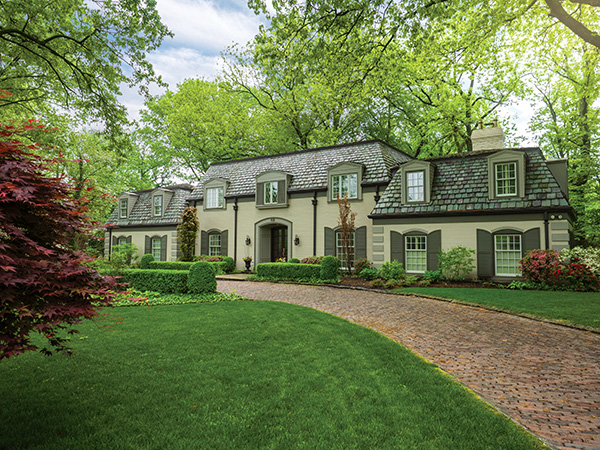 Location: East Side
Architect: Designed by the Cook Family and built in 1958
Style: French Provincial
Significant Stats: Four bedrooms, three and a half baths, 4,586 square feet
Why it stands out: The Johnson Place neighborhood on Evansville’s East Side comes with a lot of history. In the 1930s, Lambert Johnson Sr., the son of E. Mead Johnson, built a large home on 10 acres of land in the area. When the family moved out in the 1940s, the home was too big to sell. So it was razed and the land plotted into a new subdivision baring the Johnson name. This home features slate roofing from the original Johnson mansion, says current owner Jon Headlee. “The brick driveway was laid by hand by Mr. Cook as well,” he says. “There is a great history with this home.” Jon and his wife Arica moved into the home in 2011 and love the neighborhood, convenient location, and curb appeal. “Especially the slate roof,” says Jon.