Swimming is a hard sport for even the most dedicated athletes. And you won’t find a high school athlete more dedicated to the sport than Reitz High School sophomore Mikaela Jenkins.

Jenkins was born with Proximal Femoral Focal Deficiency, which means her left femur is slightly shorter than her right. The condition affects one in every 75,000 to 100,000 births and is not detectable until birth. For Jenkins, it meant there was a clear height difference in her legs when she was born.

In order for her to not be confined to a wheelchair, doctors opted to amputate her foot when she was just 8 months old. Since then, Jenkins has used a prosthetic leg instead, which has not stopped her from embarking on a swimming career that’s taken her across the world to plenty of major events, from Indianapolis and Charlotte, North Carolina, to Cairns, Australia.

To accommodate all her traveling, Jenkins mostly is homeschooled besides a Spanish class she attends at Reitz. She still has a hefty course load, and she’s preparing to be a doctor once her swimming career is over.

Despite the schedules, Jenkins finds a way to balance school, life, and swimming. On her 40-minute drive from the far West Side to Castle High School in Newburgh, Indiana (where she swims with the club team, the Newburgh Sea Creatures), she’ll sneak in some homework. During flights to events, she’ll read or get work done. She’ll stay up late and get up early if she needs to.

“A lot of late nights. Not a lot of sleep,” she says. “Definitely just using literally every availability I have to get stuff done.”

If you look at her successes in the pool, however, it’s quick to see how her work has paid off. And though her routine may not be tradtional, you wouldn’t know she has a disability, and that’s how Jenkins prefers it.

“Practicing has never been a problem for me, because I’ve grown up without my foot because I was amputated really early on in life,” Jenkins said. “I’ve never had that defining moment where I was like, ‘I just can’t do this anymore.’”

In April she traveled to Glasgow, Scotland, to swim in the Para Swimming World Series event where she notched a personal record and earned a top spot in the world rankings in her class.

There have been challenges, she says. On drills where her teammates swim down and walk back to the block, Jenkins swims back. She has to make sure her teammates know not to dive on her while she’s still in the water. If it’s a shorter distance sprint, she’ll need a coach or a friend to make sure her prosthetic leg is nearby when she gets out so she can walk back if she needs to.

Kicking and pushing off the wall is difficult, too.

“Just stuff like that I’ve had to learn to work around and adapt to,” says Jenkins. “Kicking always is going to be my downfall because I’m just never going to have as much power as other people. But, again, it’s just working on strengthening my one good leg enough to where I can keep up during sets in practice and I don’t have to go in my own lane and do my own thing.

“I want to be competent enough in every area to swim with everybody else,” she says.

That’s precisely what she does, whether it be at a Reitz practice or when she swims with her club team. 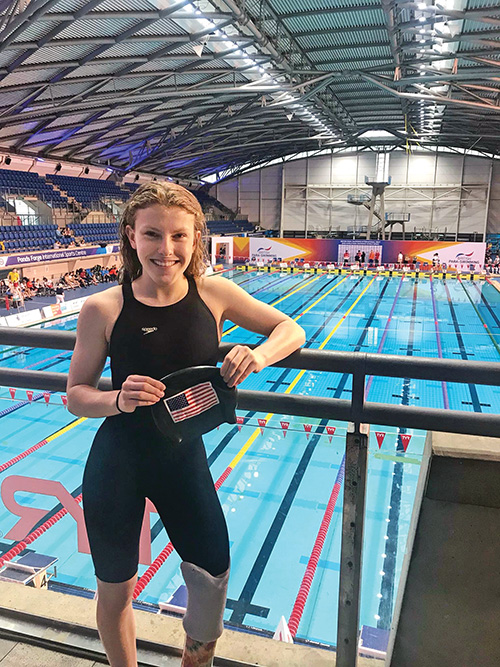 “We don’t treat her any different than anyone else,” says Reitz swim coach Dave Baumeyer. “She does all the hard sets with all our kids. She’s in our fastest lane with our fastest girl. She does all the kick sets. Whatever we give her, she does, just the same as everyone else.

“I don’t treat her too much like she has a disability because she can do everything everyone else does,” he adds.

In fact, Jenkins often can do most things better than a lot of people. Her success speaks for itself.

Her best stroke is the butterfly, and Jenkins currently ranks No. 1 (as of May 2019) in the world in the 100-meter butterfly in her disability class, which is S10, SB9, and SM10 (classifications for swimmers with minimal physical impairments of eligible swimmers that include the loss of one hand, missing feet, or a missing leg) both nationally and internationally.

There are three tiers for the Para National Team, classified by A, B, and C. The A cut is based on whatever the bronze medal time at the previous Paralympics was, though it does get updated every two years for third place world rankings, says Jenkins. The B and C teams follow suit with slightly lower times. Jenkins is on national team A, and is trying to make it on elite A, which she explains is the highest level.

“The goal is to hold my No. 1 position at least until June so I can qualify for an elite A time,” she says.

Her time in the long-course meter (Olympic-sized pool) 100-meter butterfly was 1:09.92 at the U.S. Paralympic Championships in December. At the series in April in Glasgow, she clocked a 1:06.28 time. The world record for para-swimming in that event is a 1:02.

Jenkins holds the class S10 world record in the 200-meter butterfly; but because she didn’t swim it in a para meet, but rather a club meet in Newburgh, it’s not official, explains Baumeyer.

Aside from her Olympic dreams, Jenkins says she wants to swim collegiately, likely at a Division III school, and become an NCAA champion. She draws inspiration from Olympian Katie Ledecky and Paralympian Becca Myers, a blind and deaf swimmer.

Before joining the Sea Creatures, Jenkins swam for the Greater Evansville Aquatic Team and was coached by Ginny King, the mother of Olympic gold medalist and former Reitz star Lilly King. Though she is no longer with the team, Jenkins says she still picks Ginny’s brain about swimming.

Both Jenkins and her mother also praise the help of her current coaches, Baumeyer at Reitz and Aaron Opell for the Sea Creatures.

“We love Dave and Aaron,” says Jennifer. “Aaron, he’s pulled so much out of Mikaela. And both he and Dave have gone to great lengths to help her succeed.”

Baumeyer, who’s been blessed to coach both Lilly and her brother Alex King (a Big Ten champion himself at the University of Michigan), says he’s even more fortunate to coach Jenkins. At this point, he said he’s not surprised by her success.

“She is pretty phenomenal,” he says.

During Jenkins’ swimming career thus far, she also has set a Pan-American record as she won gold at the U.S. Para Swimming World Series event in Indianapolis in April with an S10 100-meter butterfly time of 1:07.61. She also set an American record in the SM10 200-meter individual medley (2:33.60), dropping nearly eight seconds from her preliminary time to her final time. In short-course yards, in early March, she broke a minute for a time of 59.82 in the 100-yard butterfly. 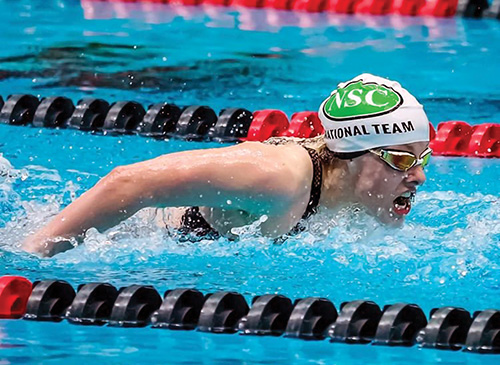 This was especially impressive for Jenkins, who admittedly fares better in longer races. A short course race means more turns, which means more times having to push off the wall. With one foot, that can be rather difficult.

“For her to break a minute in short course yards was a huge deal, because that told her she is getting better at the walls,” says Jennifer. “Even though she has one foot, she’s able to push off the walls almost as fast as someone with two feet. That was something that was just a huge accomplishment for her.”

It’s no wonder her Reitz teammates look past the disability as well. Most of them are getting passed up by her in the pool, says junior Sophia Rexing.

“She’s a really good athlete, so even with her disability, she’s still one of the best people on the team,” says Rexing. “Even though she’s a great swimmer and she’s done all these incredible things, she still makes sure to encourage the other teammates who aren’t as great swimmers.”