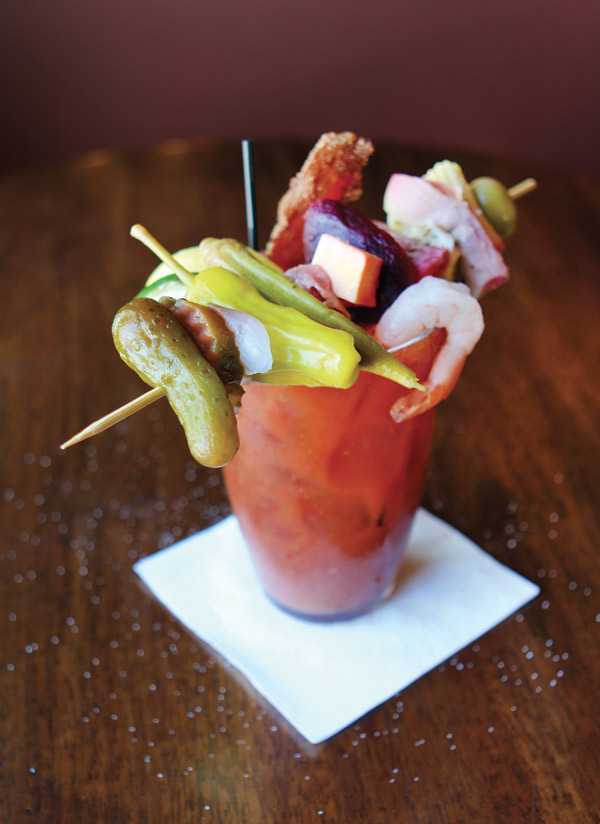 When Paige and Rodney Miller took over ownership of the Highland Inn, 6620 N. First Ave., in June 2015, they decided the first thing they needed was a signature drink. That’s when the Massive Bloody Mary emerged.

While classic recipes vary depending on the spices and flavorings used, Highland Inn’s Massive Mary stands out for its companion skewer of assorted treats. “On the skewer we do everything from sweet pickles to pickled okra,” says Alyssa Miller, Paige’s daughter. “We mix it up each week to keep it different.”

The variety offered is vast. Sausage, pepperoni, olives, artichoke hearts, string cheese wrapped in prosciutto ham, pickled beets, and cocktail onions all take a turn on the skewer. To top it off, a strip of bacon is dunked in the drink instead of a celery stick.

The Bloody Mary itself is made with a base of Zing Zang, a Bloody Mary mix, and a combination of the Millers’ own special ingredients. What’s the best day to come in and sample the Massive Mary? Paige recommends Saturdays, when it’s offered for $5 and can be paired with Highland Inn’s rib-eye steak sandwich and fries.

For more information about the Highland Inn, call 812-909-1500 or visit its Facebook page.