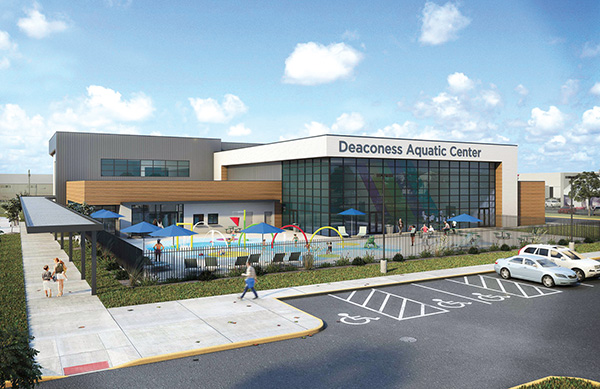 It’s been years in the making, and it is getting closer to a groundbreaking.

For years, local residents and an aquatic center task force (formed by Evansville Mayor Lloyd Winnecke) have been working toward the goal of construction of a brand-new aquatic center to serve Evansville area schools and residents. In September 2018, Mayor Winnecke announced that finally the plans were coming to fruition — a facility featuring competition and recreational pools would be coming to Evansville.

One year on from the initial announcement, and the Deaconess Aquatic Center (to be located next to Bosse Field) is moving along as scheduled, says Parks and Recreation Department Executive Director Brian Holtz.

“At this point, I think we’re pretty realistic about the timeline,” he says. “We’re still looking at doing a groundbreaking this year, with construction to start this year, and construction completed in the spring of 2021.”

The bidding process for the project started in August, with four of the initial 17 bid packages being accepted. The remaining 13 have been let out for re-bid — those will be reopened at the Parks Department board meeting scheduled for Oct. 16. Once a final bid is accepted, construction can begin.

The Deaconess Aquatic Center — one of the largest projects the city’s parks department has undertaken — will replace the aging Lloyd Pool facility, which was built in the mid 1970s.

“It’s no secret that it is long overdue,” says Holtz. “The Deaconess Aquatic Center is not only huge for our department, but it is a great win for the city. It is a quality of life project.”

Not only will the facility host a competition swimming pool but a recreational pool and outdoor spray parks as well. The plan, says Holtz, is to include swimming programs for children as well as adults and even therapeutic programs.

“The aquatic center task force has been meeting for two years to work on this design. It’s really exciting to see it come full circle and in the process of being built,” he says.