Melodic Virtue has been a name Aaron Tanner has recycled since his early forays into creative businesses. It began with a record label, which quickly turned into a graphic design business. Now, it continues as Tanner steps into the world of book publishing.

“The name has just seemed applicable for every avenue I’ve pursued,” he says. “It’s just always been around.” After 13 years in business as a graphic designer mostly in the music industry, Tanner — an Evansville native — now has turned his talents to independent publishing of limited-run coffee table books. Tanner counts music as a passion — he has played bass in several bands. The idea to transition his business came after his work with the band The Pixies last year.

“I decided I wanted to make a major change,” says Tanner. “But quite frankly, I’m only good at one thing, so it still needed to be design related somehow. Now, instead of doing album covers and websites for bands, I approach them about partnering to create a book.”

His first production after his transition is a work about the 1990s punk band Face To Face. Formed in 1991 in California, the band became popular with their 1995 album “Big Choice.” Since March, Tanner has worked with the band and some of its fans to produce, “Face To Face: 25 Years of SoCal Punk, the Visual History.”

How do you decide which bands you would like to work with?
In the case of the Face To Face book, front man Trever Keith and I had worked on some things in the past, and he saw I was doing publishing and approached me about it.

Other ones mostly are just bands I’m big fans of. I also have a lot of friends who work in the music industry who represent bands and ask if I would consider doing a book on them.

Do you work in genres of music you already listen to or are a fan of?
Not necessarily. With Face To Face, they are a punk band and I have never gone to a big punk show ever. So at the ripe old age of 40, I went to my first punk show. I’ve known about this band since, I think, 1996, but I wasn’t super familiar with their music. But it’s really been fun.

Do you feel your work is unique in an artistic sense?
I would like to think my work is unique. I know this idea is somewhat unique. There are a lot of books, lots of visual history books on bands. They tend to focus on bigger bands like Elvis or the Beatles.

But there are not a whole lot of people focusing on bands that were seminal of their time. One of the things I have been very conscious of doing is to partner with the bands. I actually want to help them tell their stories instead of just finding a photographer who has done a lot of work for the band and buying the rights of the photos, cutting the band out.

I want to take the band along for the ride. Plus, they give me a lot of access to behind-the-scenes stuff they have done. They also have to give me an unreleased song, so each book comes with a FlexiDisc (a record that plays on any turntable) with an unreleased tune.

What do you enjoy most about your work?
Kind of all of it. I’ve always liked investigating things. Even when I was younger, I always was watching documentaries or stumbling upon a subject and then immersing myself, like semi-manically, into it.

I have to do that with these bands, especially ones I’m not familiar with. You have to really, really dig deep and do your homework on it because you don’t want to miss a critical point in the band’s career that maybe is not talked about as much. That’s really fun.

Obviously the design work is fun, but actually it is the smallest part of this job. I think I designed the Face To Face book in five weeks, but I’ve been working on it since March.

What did you learn about Face To Face during your research?
In terms of this band, they were not that wild — they were pretty tame guys. I guess one of the interesting things that has less to do with the band itself is their fans. One thing I didn’t realize is how loyal of a fan base they have. It’s almost like a cult following.

A lot of people came from bad situations, and they found a lot of hope in the music. We put out a call for submissions from fans so there are a lot of quotes from them in the book.

When is the book available?
It’s up for pre-order now, and we’ve already sold a third of the books. It officially comes out Dec. 1.

For more information on Melodic Virtue and to purchase the Face To Face book, visit melodicvirtue.com. 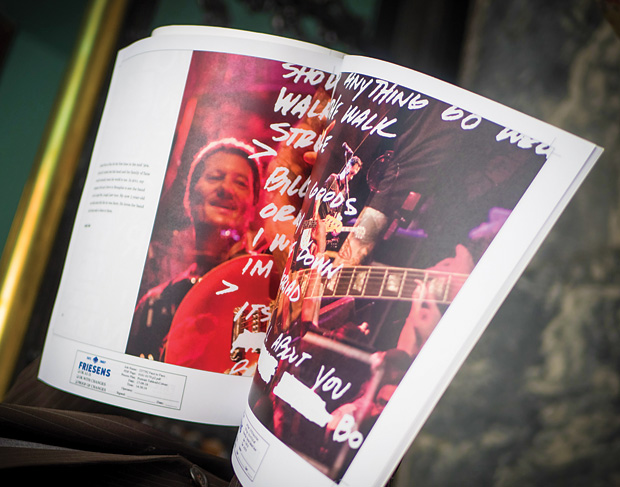