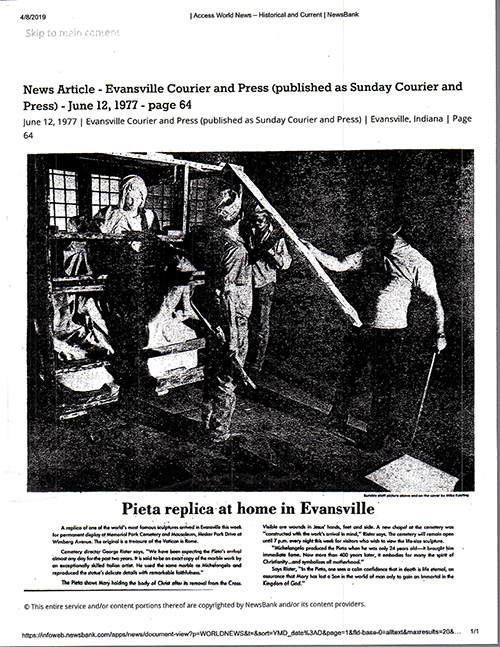 Since purchasing the Alexander Memorial Park property in 1987, Alexander Funeral Homes was left with questions surrounding a life-size replica of Michelangelo’s Pietà that was brought to the property by the previous owners.

The statue is one of only about 20 exact full-size replicas in the country; however, no official records were kept on the statue. Evansville Living covered the Pietà in the previous issue, March/April 2019.

After reading the story, Evansville resident David Wilson called the magazine to share more information about the statue. He remembered when it was delivered and that the Evansville Press (now the Evansville Courier & Press) had covered the statue upon its arrival to the city in 1977. 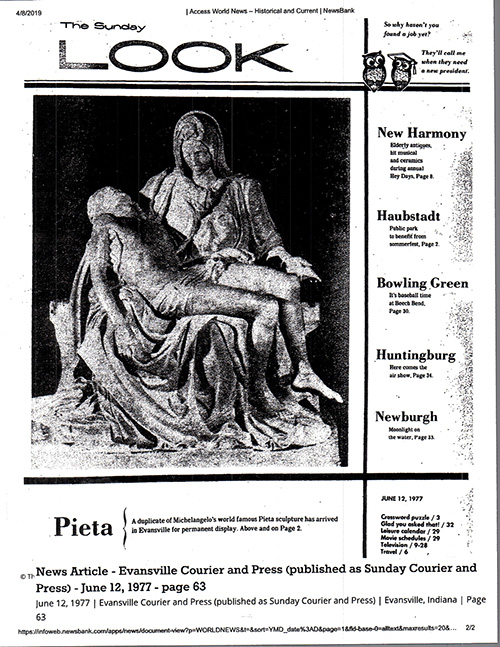 “I can’t tell you how excited I was to talk to David Wilson and hear his stories about the Pietà in Italy and the one we have here,” says Jill Brinkley, the community outreach coordinator for Alexander Funeral Homes. “I also was surprised to hear the original sculptor they hired died, and they had to do another whole search and series of negotiations to find another sculptor.”

While the replica’s sculptor remains unknown, Brinkley already has begun compiling copies of the old articles and new information to add to the statue’s file.

“One hundred years from now, if someone asks where it came from, they will have the answers,” she says. “I am definitely continuing the search for the sculptor and any other information I can find on its journey here and its stay here.”