Chuck Johnson has been working in the restaurant industry for 26 years. His first restaurant job was at Turoni’s right before he turned 16, and now he is the owner of Deerhead Sidewalk Café.

Deerhead itself was established 36 years ago, though the building was constructed in 1867 and has operated as a tavern for most of its life. The original structure houses the bar and hallway of Deerhead, but the previous owner added significant space in the 1980s. When Johnson took over the restaurant 14 years ago, his focus was providing quality food for diners of all walks of life.

The menu is classic home-cooked food with crowd favorites like the cheesesteak sandwich, strombolis, tenderloin, and famous double-decker pizza. While Johnson made minor changes to the menu after purchasing the restaurant, his priority always was using fresh ingredients in the dishes his customers crave.

“To me taste is key,” he says. “If you try to skimp on something and use low-quality ingredients or produce, you can tell a big difference. I added a lot of the gourmet pizzas — the Mexican meltdown, jazzy pepper paradise, meaty blues. You definitely have to keep it evolving.”

For Brian Utley, one of Deerhead’s cooks, the double-decker pizza is his favorite dish on the menu to make. During lunch hours, however, he says he is lucky if a customer orders something other than the popular chicken souvlakia, grilled chicken on toasted pita bread with feta cheese, sautéed onions, and green peppers. The restaurant’s double-decker pizza, however, truly is the most unique item on the menu with two layers of thin crust filled with sauce and cheese and finished with toppings of the customer’s choice. 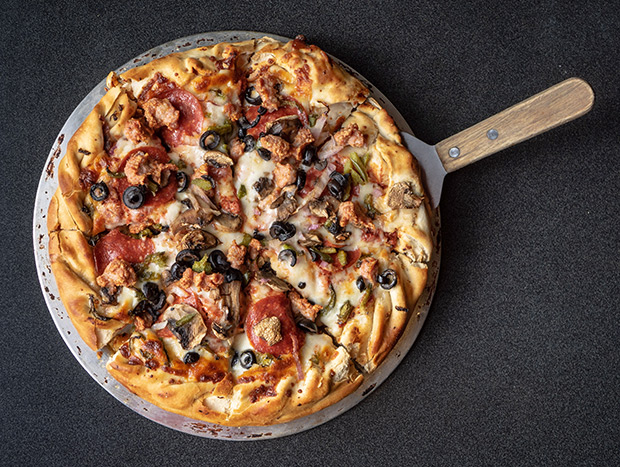 “It’s simple; it’s good,” says Utley. “It’s like all the other pizza places, but we have the double decker. We have something nobody else has. I enjoy the food. I’ve been here so long, but I still enjoy it.”

Utley has worked on and off at Deerhead since Johnson first purchased the establishment, but says he has been at the restaurant steadily for the past three years. Johnson says this is typical of many employees and that Deerhead boasts low turnaround among staff.

This same approach is used with customers. When Johnson first started in the restaurant business as a teenager, he says he was shy and nervous about dealing with customers. Today, however, he has a slew of dedicated patrons he talks to on a regular basis. It isn’t unusual to see him sitting with guests and joking around with them.

“What’s nice about it is it’s a wide range of age demographics — everyone from kids up to 80 year olds,” he says. “We do have some good customers who are loyal.”

Everything Johnson does with Deerhead is centered around his customers. From bringing in live music and entertainment on the weekends to adding fresh menu items, his goal is to keep his diners happy.

“Lately I’ve been getting a lot of requests for low carbs, and I’ve thought about tinkering with the pizza crust doing something lower carb or gluten free,” says Johnson. “But that’s the fun part of it. You give the customers what they want so they keep coming back. You play around with it and tweak this here and there.” 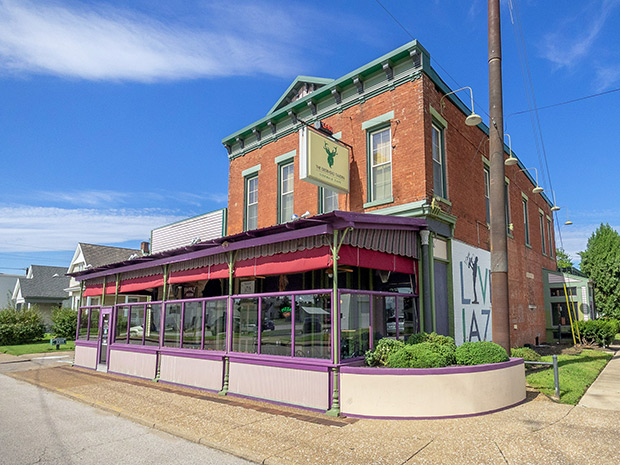 While being in a historic building adds to the charm and character of the restaurant, there are some downfalls. Even these challenges, though, are seen by Johnson as opportunities to improve. A representative from Americans with Disabilities Act approached Deerhead about making the building more accessible. Johnson invited the representative into the restaurant to see exactly what steps he could take to improve the situation and eventually installed ramps to help customers in wheelchairs move more easily through the restaurant.

“Anything I could do to improve for our customers, why wouldn’t I want to improve on it to help them?” says Johnson.

In his second decade of ownership, Johnson says he has a thousand more ideas for the business. His priority, however, always stays on the community created by Deerhead and the people who patron the restaurant.

“I would say the goal is to make an impact to the community, to help out the people who have been loyal to me, and to just serve the community,” says Johnson.