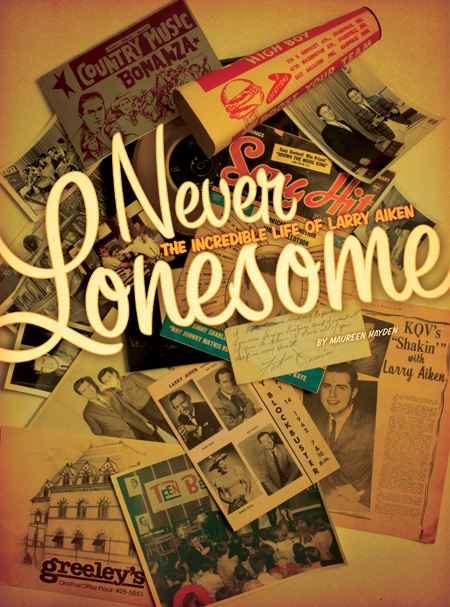 Larry Aiken had dabbled in entertainment before he made his national television debut from a set in the NBC Studios in Rockefeller Center at the age of 12. By the time he was 6, he’d transformed tin cans into a toy microphone to broadcast make-believe radio shows from his bedroom window. But it was his skill as a young promoter that landed him in New York City in 1952 for an appearance on We, the People, a popular interview program featuring celebrities, politicians, and regular folks with interesting lives.

What caught the attention of the show’s producers was a wire story about how the young lad from Indiana had paid 22 cents in “amusement taxes” on revenue he’d made staging a backyard circus with the neighborhood cats and dogs. Somebody tipped off the media after the IRS decided he was owed a refund.

The TV appearance that ensued was a treat, but it wasn’t time in front of the camera that enthralled young Larry. It was the behind-the-scenes action right before the camera went on. “That was the moment I became terribly intrigued by the idea of doing something that had to do with entertaining people,” Aiken recalls. It was a feeling that came into focus about a decade later when Aiken transformed his fame as a teenage disc jockey known as “Lonesome Larry” into his debut as an entertainment promoter in Pittsburgh with the “World Twist Championship.” Jerry Lee Lewis and Danny and the Juniors made appearances at the event, but they didn’t impress Aiken as much as the thousands of people who paid $1.50 each to watch 750 couples compete. After the show, his business partner opened a suitcase stuffed with $15,000 in cash from ticket sales and told Aiken to take half of it. “That,” says Aiken, “is when I decided to become an entertainment promoter.”

IF YOU COUNT AIKEN’S CHILDHOOD CIRCUS as his first venture as a promoter, he’s spent more than 50 years in a career that has taken him around the nation, made him a fortune, and given him access to a wildly diverse cast of characters, from Fats Domino to the Allman Brothers. His career as a promoter went beyond bringing big-name entertainers and Broadway acts to cities around the Midwest — he’s also owned a radio station, three restaurants, a nightclub, and a movie theater, and along the way, he became involved in politics promoting winning candidates. What may not be as well known is his philanthropic work, in which he employed his skill as a promoter to raise more than $1.2 million for local charities.
He’s officially retired from all that now, prompted by battles with esophageal cancer and lung disease — both related, he says, to years of chain-smoking cigarettes — but he’s not done yet. In late February, friends and colleagues of Aiken’s are “roasting” him at an event titled, “An Evening with Lonesome Larry.” It was supposed to be a surprise, but a close friend tipped off Aiken, who agreed to help promote the event on two conditions: that a lot of money had to be raised and that it had to go to four of his favorite charities: the Albion Fellows Bacon Center, the Evansville African American Museum, the Santa Clothes Club, and the Berkley Ann Branson Young Women of Promise Scholarship Fund. To grant those wishes, Aiken’s friends are selling tickets, soliciting sponsorships, and collecting stories about a man who has led a storied life.

WHAT STORY YOU MAY KNOW or tell about Larry Aiken may depend on your age. If you grew up in the 1950s in Evansville and spent your weekend nights cruising a circuit that included High-Boy hamburgers at Austin’s Drive-In, then you know him as Lonesome Larry, the teenage disc jockey on the late shift at WEOA. He talked his way into the job at 16 (after working as a weekend record sorter at a competing radio station) and convinced management of the station ­— then the lowest rated in the city — to do what no other local station was doing; that is, play the rock’n’roll music that was driving teenagers — and their parents — crazy. During the week, he worked alone at night from a studio at the base of the WEOA transmitter atop the old YMCA. It was a lonely place, but he was feeling like a lonely teenager, too. His parents had divorced, and his weight had ballooned to 280 pounds. As he says, “not many of the gorgeous young dames wanted anything to do with me.” But plenty of his peers loved Lonesome Larry, and that prompted the owners of Austin’s to convince WEOA and Aiken to start broadcasting from a booth at the drive-in every Friday night. Business swelled as Aiken solicited requests from customers, called out their names on air, and encouraged listeners to pick up to-go orders as their requests were being played on air.
At 18, after two years at WOEA, Aiken was lured to a Top 40 station in Louisville, with the offer of $150 a week, more than twice what he was earning here. WOEA eventually lured him back with more money, but it wasn’t long before an even better offer arrived: $420 a week to move to KQV in Pittsburgh.

It’s there where Aiken first began to realize his potential as a promoter. The World Twist Contest is one example; working with an established promoter in the city, Aiken — still known as Lonesome Larry — decided to bill the contest with an international image after he convinced some foreign students enrolled in the city’s universities to enter.[pagebreak]By 1962, when Aiken was 22 and the top DJ in the city — and being interviewed by such national music magazines as Hit Parader — he’d earned the reputation as a kind of kingmaker. An unknown young artist named Bobbie Vinton stopped by the station and begged Aiken to listen to a single he’d cut with Epic Records. Aiken introduced it to his listeners during a segment called, “Make It or Break It,” and they went wild, flooding record stores in search of it. Two weeks later, the song, “Roses Are Red,” hit the Billboard Hot 100 singles chart and soared to number one, where it stayed for four weeks. Vinton later credited Aiken for making his career. There’s a similar story about Aiken and Gene Chandler’s hit, “Duke of Earl.”

AIKEN RETURNED TO EVANSVILLE in late 1962 to launch a career here as an entertainment promoter. His first show, featuring Ray Price, Roy Orbison, Minnie Pearl, Roy Acuff and other country stars, brought in a crowd of thousands, but his profit was just over $400. He got smarter about how to do it, connecting with Dick Clark and his Caravan of Stars, which allowed Aiken to bring into the city some of the biggest names in the music business at the time. He branched out, re-launched his own business, Aiken Management, and expanded the venue of entertainers to include such mainstream stars as Andy Williams and Henry Mancini. But the man who brought the Guy Lombardo Orchestra to the city was the same man who brought The Kingsmen here just as their provocative hit song, “Louie, Louie,” was banished from the airwaves by then-Indiana Gov. Matthew Welsh. The controversy caused ticket sales to skyrocket, just as outrage from local conservatives would later trigger nearly sold-out performances of the rock musical Hair when Aiken brought that to town in 1968. After local ministers failed in their attempts to shut down the show, protesting its anti-war sentiments and nude scene, someone burned a cross on the front lawn of Aiken’s East Side home. His wife, Suzanne, and the couple’s two young sons, Andy and Tony, were home at the time. Aiken would go on to book Hair into 40 more cities over the next three years.

There is a multitude more stories from Aiken’s tenure as an entertainment promoter that stretch into the 1970s, 1980s, and 1990s. And a multitude more from his other business ventures such as The Pub (one of three restaurants he started then sold) or the Artists’ Market, an art-supply store he and his brother, the late Keith Aiken, opened for their mother, Juanita, before her death in 1968.

AND THEN THERE IS A WHOLE OTHER CHAPTER of stories from Aiken’s venture into local Democratic politics, beginning in 1979 when he ran the aggressive mayoral campaign of his high school friend, Mike Vandeveer, who ran against Randall Shepard (now the Indiana Supreme Court Chief Justice), a protégée of the late Mayor Russell Lloyd Sr. Aiken was so high-profile in politics during the Vandeveer years that the opposition party ran a campaign commercial with an anti-Aiken theme during the re-election campaign in 1983. After Vandeveer resigned in 1987 to take a lucrative position with Mead Johnson, Aiken quietly dropped out of politics and bought a radio station, WGBF ­­— where he’d worked as a record sorter at 15. Aiken would go on to sell the radio station and his other business interests and stay out of politics until 1999, when he helped run another mayoral campaign, for his longtime friend, Rick Borries, who lost by only 518 votes to Russell Lloyd Jr.

In 2003, as Lloyd was gearing up to run for a second term, Aiken agreed to raise money for the challenger, Jonathan Weinzapfel. Weinzapfel won and then pressed Aiken to take over as the local Democratic party chairman in 2005. “He turned me down twice,” Weinzapfel says. “I told him, ‘I need you. We need you. The party needs you.’”

What they needed, the mayor says, was Aiken’s skill and savvy as a promoter. Weinzapfel wanted to re-invigorate the local party and give it a fresh new identity and a driving purpose as a force that could attract strong candidates and raise the kind of big money needed to run smart, successful campaigns. One of Aiken’s first moves was to bring in the fiery political commentator James Carville, the engineer of Bill Clinton’s 1992 presidential campaign, as the keynote speaker at the annual Jefferson-Jackson Day Dinner. Tickets went for $150 a pop, and Aiken raised more than $109,000 in a single night. As Weinzapfel notes, “Larry Aiken puts the pizzazz into politics.”

That pizzazz generates its own set of stories like the one from U.S. Congressman Brad Ellsworth, whom Aiken and Weinzapfel helped recruit in 2005 to run against longtime Republican incumbent John Hostettler.

Ellsworth calls the beginning of Aiken’s tenure as the local party leader “the end of the blue Smurf era.” He’s referring to Aiken’s insistence that campaign materials — which had once been so cheaply printed that they gave candidates a strange blue tint — be upgraded dramatically and that the party’s traditional blue and gold colors be jettisoned in favor of a more patriotic red, white, and blue. Jonathan Siebeking — whom Aiken hired as the local party’s first full-time political director — says the stories of Aiken’s exacting attention to detail are plentiful and offered as evidence of success: Democrats have taken 37 out of the last 41 local offices they’ve run for since 2006, when Aiken stepped in as party chairman.

Aiken shrugs when he hears that story and credits the candidates for their talent, just like he credits the myriad of entertainers he helped promote. But when pressed, he’ll acknowledge success. “I love the business of promotion,” Aiken says. “My fascination has never been about being around famous people, it’s always been about the business of fame. Anybody can draw a crowd. I just wanted people to say, ‘Aiken can do it better.’”