If you visited one of the 423 parks in the National Park System last year, you were in good company. Outdoor spaces provide safe options for people of all ages to commune with nature after months of staying at home due to COVID-19 precautions. Olympic National Park in Washington state, which ranks among the top 10 most visited U.S. national parks, is one I had the opportunity to explore last October during the height of autumn color.

With three distinct ecosystems — mountains, rainforests, and 73 miles of coastline — covering nearly one million acres, the Olympic Peninsula is as varied as it is vast. Even so, you can experience all three ecosystems in a day. 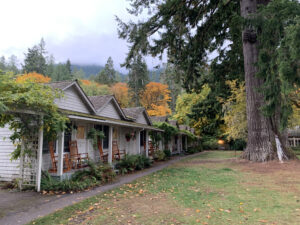 Day One
Less than two hours after my travel companion and I landed at Seattle-Tacoma International Airport, we briefly stopped on our drive northwest in Chimacum for a tour of Finnriver Farm & Cidery, a 50-acre organic orchard. We sampled a selection of its award-winning hard ciders and fruit wine before continuing on to Lake Crescent Lodge, west of Port Angeles. Opened in 1915 as Singer’s Lake Crescent Tavern, the lodge is set on the shores of a stunningly clear glacial-carved lake. Guided pontoon boat, kayak, and canoe tours can be booked to learn about the area’s history and native lore.

Day Two
The next morning, after a fortifying breakfast in the lakefront dining room, we embarked on our first hike. A two-mile out-and-back trail behind the lodge led us through an old growth forest to elevated platforms perfect for viewing the impressive 90-foot Marymere Falls. It is one of more than 20 sites on the Olympic Peninsula Waterfall Trail.

We drove to the top of Hurricane Ridge, so named for the 70-plus mile-per-hour winds that whip through the area. On a clear day Victoria, Canada, and Cascade Mountain peaks are visible from a lookout partway up the ridge road. Hiking trails are popular during summer, while snow enthusiasts enjoy cross-country skiing and sledding throughout winter.

We were nearly a mile high (5,242 feet) when we reached the Hurricane Ridge Visitor Center, where we braved the wind to take in views of the surrounding Olympic Mountain peaks.

A low-key afternoon was spent sipping local vintages at Port Angeles wineries Camaraderie Cellars and Harbinger Winery, two of the nine wineries and cideries in the Olympic Peninsula.

Our third day took us through the town of Forks. Fans of the “Twilight” vampire-themed book and movie series, which were set in Forks but not filmed there, may want to stop by the Rainforest Arts Center to view costumes and props from the films.

Our next hike was in the Hoh Rainforest, one of the largest temperate rainforests in the U.S. The Hall of Mosses Trail, less than a mile long, led us through groves of giant ferns and towering old-growth trees, while an ethereal, otherworldly canopy of draping mosses and lichen hung from tree limbs. Many longer trails are available for serious hikers, and a large 72-site campground along the Hoh River is open year-round.

After exploring the rainforest, we headed for Ruby Beach, one of the most photographed and starkly beautiful beaches on the peninsula’s rugged coastline. While I am used to walking along soft, sandy beaches, this is covered with small rocks and strewn with driftwood, so waterproof hard-soled shoes are recommended. Tall towers of rock called sea stacks, formed by erosion over hundreds of years, rise from the sea.

Check the tide charts to time your visit at low tide, if possible, when marine creatures such as sea stars, anemones, urchins, limpets and crabs can be observed in the tidepools that form.

Less than an hour later, we reached Lake Quinault Lodge, where we settled into our cozy lakeview rooms and freshened up for dinner. President Franklin D. Roosevelt left his mark here in 1937 when he visited the lodge on a fact-finding mission and lunched in the dining room, later named for him. The following year, Olympic National Park was established, nearly three decades after President Theodore Roosevelt set aside more than half a million acres surrounding Mount Olympus as a national monument.

The following morning, after completing a portion of the Quinault Loop trail to Cascade Falls, we sought out the “World’s Largest Sitka Spruce Tree” on the grounds of Rain Forest Resort Village. Estimated to be more than 1,000 years old, it towers at 191 feet tall and nearly 18 feet in diameter. It is one of six champion conifer trees in the Valley of the Giants, recognized by the National Forestry Association as the largest living specimens of their species. All can be located on eight miles of interconnected trails from Lake Quinault Lodge.

Not a hiker? Schedule an educational half-day guided Quinault Rainforest Tour via coach, which includes short walks and plenty of photo opportunities. Three boat tours from Lake Quinault Lodge are also offered at morning, afternoon, and at sunset.

Back to the City

After four nights in Olympic National Park, we returned our rental car to the airport and spent two nights in Seattle. Read about our Chef’s Tour of Pike Place Market and visits to Chihuly Garden and Glass, Space Needle, and Seattle Aquarium in the companion piece “Enjoying the Emerald City.”

Weather
Be prepared to get wet no matter when you visit. Pack a hooded rain jacket and waterproof boots. Olympic National Park receives up to 140 inches of annual rainfall — that’s almost 12 feet. The driest months are July and August; November through March are the wettest.