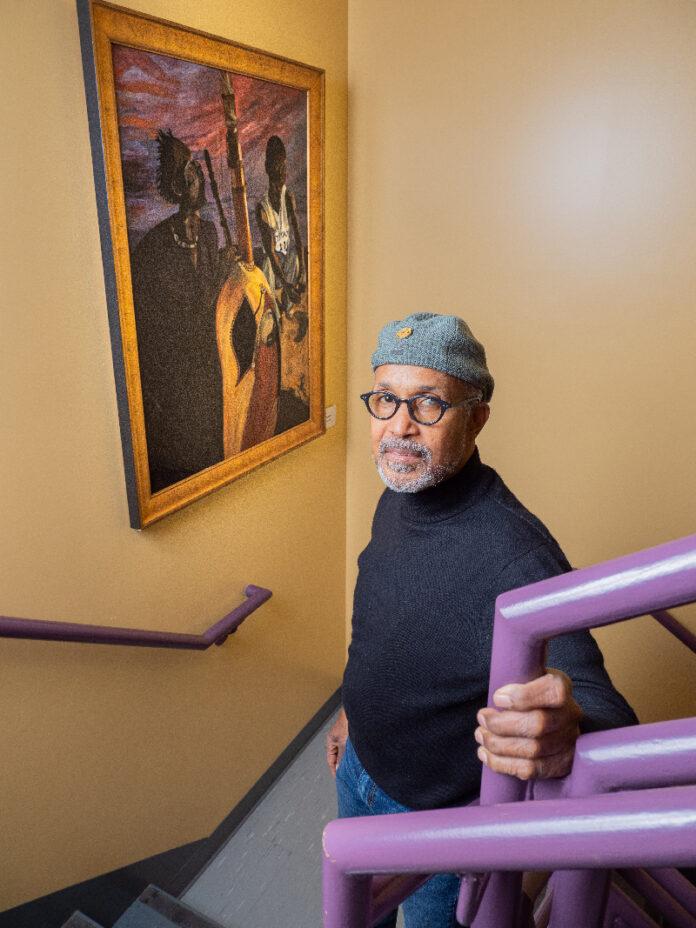 In “The Show Will Go On” feature story in the March/April issue of Evansville Living, we met artist and Twymon Art owner Billy Twymon. Through the gallery’s drum circle, Drums for Enlightenment, Twymon has led several new initiatives.

Two gallery-affiliated artists, Nero and the Darkskin Poet (their stage names), launched a podcast called “Black in a Minute” which stemmed from the communication and social-justice conversations at Drums for Enlightenment.

Along with the podcast, the drum circle inspired “Jerry’s Corner Mart,” an installation at 936 Judson St. initiated by Twymon and his friend Charles Sutton. The installation is a “living” piece of art. It can be deconstructed and reconstructed to address multiple issues, such as racism, sexism, and food deserts, through diverse art mediums.

The current theme “Jerry’s Corner Mart” — available until the end of April — is a series of art works addressing racism, inspired by the book “All American Boys” by Jason Reynolds that tells the tale of a Black teenager who is beaten by police outside of Jerry’s Corner Mart.

For Twymon, the instillation and Drums for Enlightenment initiatives are a representation of a lifelong passion for art, business, and social justice issues.

He always wanted to be an artist, getting his start with watercolors, the only paints his parents could afford. The percussionist and flautist owned several bakeries and coffee shops in California and then Evansville (Java Beans formerly on Martin Luther King Jr. Boulevard), where he relocated to be closer to his son.

“My PhD was this — poor, hungry, and driven,” he says. “When I first started thinking about becoming a working artist, I knew that would be an uphill battle right off the top.”

The self-taught artist has come a long way to make a name for himself. Read more about how he is supporting young artists making the same journey in the March/April issue.