One of Marta Hollen’s fondest memories of Hilltop Inn is sitting on the end of the bar drinking Shirley Temples while her grandfather Earl “Bud” Hudson tended the bar.

“It always made me feel so grown up,” she says with a smile.

Hollen’s been the owner of the West Side restaurant at 1100 Harmony Way for only two years, but it has been a part of her life for more than two decades. From her grandfather working the bar to her father later owning the business, Hilltop Inn has a long, storied history with Hollen’s family, as with many Evansville residents.

Aptly named for its location atop a hill on Harmony Way, Hilltop traces its start back to 1839 when it provided shelter and respite for weary travelers as a stagecoach stop. With a saloon and dining room on one side and a general and feed store on the other, guests spending the night bedded down in rooms on the second and third floors.

Through the years, the building morphed into just a tavern and restaurant and has continued to serve in that role for more than 100 years. Hollen’s parents Don and Lanette Snyder would enter into Hilltop’s story as owners in 1999.

“Dad always was looking to buy a place of his own,” says 43-year-old Hollen. “Evansville is the 30th place I’ve lived in my life. We moved around a lot. Everyone always asks if I was a military brat, and I explain I’m not; my dad always just worked at restaurants.” 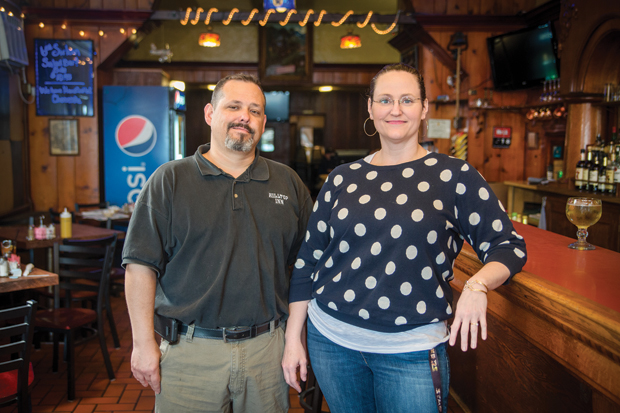 ▲ Sitting on a hill on Evansville’s West Side, the Hilltop Inn has a history of serving the community for more than 100 years. Robert Gibbs and Marta Hollen, who are engaged to be married, operate the restaurant today.

Though her family moved all throughout the country, Hollen says Evansville always was home to her.

“I was born in Virginia and only lived there six months of my life,” she says. “I don’t consider it my home, though. Evansville is my home. It’s the only place we ever kept coming back to.”

And every time the family returned to Evansville, a trip to the Hilltop was a must. So it made sense when former owners Jim and Barb Muensterman called Don about buying the restaurant, Don immediately took the offer. Eighteen years later, Hilltop passed from Don to his daughter, even though she was working as a nurse at the time.

“That’s the thing about family — you do what you need to do,” says Hollen. 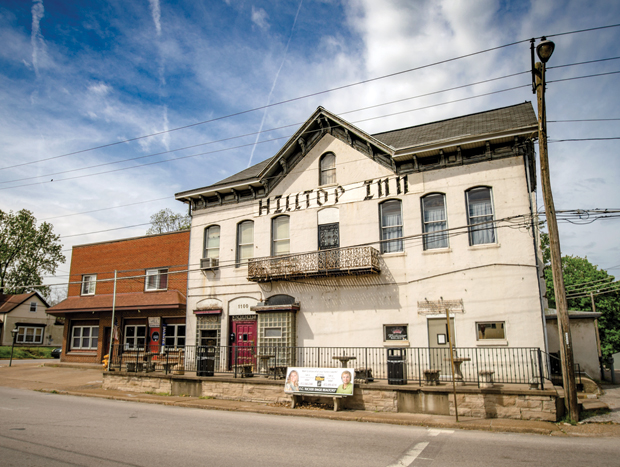 ▲ Hilltop has been in Hollen’s family for almost two decades; two years ago, she purchased the restaurant from her parents Don and Lanette Snyder.

The Hilltop Inn has a sense of family. Hollen has a story for any topic or conversation, and as she moves through the two dining rooms and bar, she doesn’t hesitate to stop and share a hello. She talks to everyone as if they are old friends, even dispensing a little advice now and then.

“I’m a talker. I like talking to people,” says Hollen. “There’s nothing better than getting paid to talk. And I like to see all of our customers come back.”

Her long-time employees provide that sense of family to Hollen as well.

“It’s no different than nursing, expect instead of getting critically ill patients, I’ve got 40 families I have to make sure are being supported,” she says. “There are families that depend on this place succeeding.

“And I do give out plenty of medical advice here,” laughs Hollen. “It’s always fun.”

All of that aside, Hollen says it is the food that brings people back. A glance down the menu offers no surprises for a family restaurant and tavern located in Southern Indiana. Lunch and dinner specials of ham, fried chicken, dumplings, and steak are offered alongside platters of Icelandic cod and catfish fiddlers. 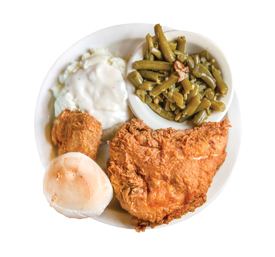 Hollen says the fried chicken, cod, and fiddler plates are crowd favorites. Dressed with sides like mashed potatoes and gravy, green beans, and a dinner roll, the meals resemble the comforts of home-cooked dinners.

But when it comes down to it, it’s easy to see the brain sandwiches are Hollen’s favorite to promote.

“It’s so cute!” she gushes as she shows a brain slider. Compared to the big brain sandwiches, the slider option is only 2 ounces of brain mixed with egg, pan fried, and served with pickle and onions. “It’s the cutest little thing, ” says Hollen.

The sandwich already was offered at Hilltop when Hollen’s parents took ownership, and not much has changed with the offering. Today, instead of beef brains, Hollen and her staff fry up pork brains to regulars and those adventurous eaters wanting to try something new. If the 6-ounce Big Brain sandwich is too much, the slider Hollen introduced still offers a hearty meal.

“People freak out sometimes — it’s the idea of it being a brain and all,” she says. “To me, I think it kind of tastes like eggs. I like the brains.”

Though the Hilltop Inn staff prides itself on the sense of comfort it provides with the food they serve, at the end of the day, it always is the people that are the best part about the restaurant for Hollen and her crew.

“On Friday nights you will see people sitting at a table, then they get up and talk to people. It’s like a little dance, they are all over the place,” says Hollen. “I think it is so neat for people to have a place they know when they go there, they’re going to see people they know. It’s a nice feeling.”