Out of the Woodwork

When Rob Millard-Mendez began his undergraduate studies at the University of Massachusetts Lowell, in his hometown, it was with the intent to go into medicine. But it would take one year for him to make the leap from potential doctor to artist.

“The scholarship committee was afraid I would starve,” says Millard-Mendez with a smile. “But I said, ‘I’m going to do fine.’”

After 10 years at the University of Southern Indiana, the Department of Art Associate Professor who teaches woodworking has done more than just fine; he has succeeded in his ambition to be a sculptor and artist. Along with his bachelor’s degree in fine arts, Millard-Mendez has a master’s degree in fine arts from the University of Massachusetts Dartmouth. He has shown his work in more than 400 exhibitions in all 50 states as well as internationally.

Millard-Mendez — who now resides in Evansville — describes his work as an attempt to illustrate ideas he finds interesting.

Every piece he creates starts with a concept that is compelling to him; he then works to produce the most interesting possible visual presentation for his audience.

“I’m thinking about how the object is crafted, what it’s made out of, its scale, its relationship to other art forms and other historical art forms,” he says.

Recently, his work was part of the 44th Mid-States Craft Exhibition at the Evansville Museum of Arts, History and Science. Currently, his solo exhibit, called “Myths, Masks, and Masts,” is on display in the John Streetman Alcove.

“I haven’t had a lot of solo exhibitions around Evansville, so it’s good,” he says of the show which features mask pieces, boats, and a chair. “The museum has been very supportive.”

His solo exhibit will be available to view at the museum until April 24. Millard-Mendez also is working on pieces to be featured in an exhibit at the Appalachian Center for Craft in Smithville, Tennessee, from July 1 to Aug. 5. 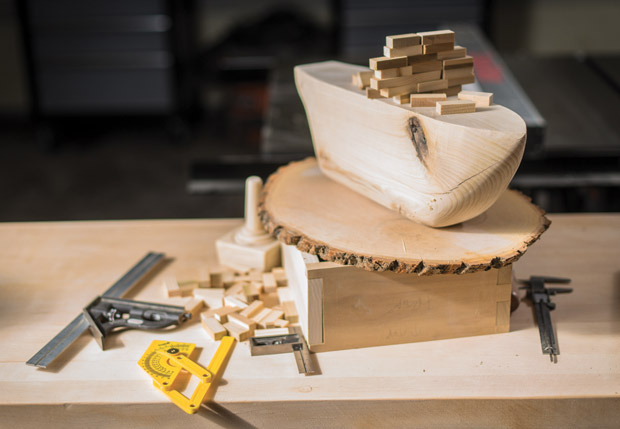 ▲ Rob Millard-Mendez has been an associate professor of art at the University of Southern Indiana for 10 years. During that time he has used his skills in woodworking to create many visual and unique sculptor pieces. Below, Millard-Medez completed the piece “Prospero Chair” in 2014. 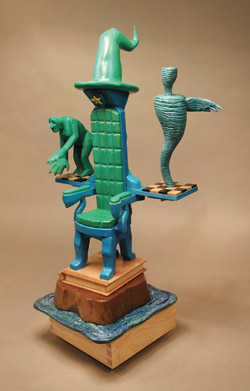 What do you enjoy most about your art?
One of my favorite things to do, and a lot of artists will do this, is go to an opening of your work or an opening where your work is and you’ll kind of just lurk and listen to what people say without knowing you’re there, which is really fun. I really enjoy making people think, making them laugh, making them ask questions. I want my work to always be visually interesting but also to offer you something beyond that, like a concept or sometimes even a dumb idea, but at least an idea. I want it to offer something.

What do you find most rewarding about being an art professor at USI?
I would say my students who go on to have nice careers in areas I helped them learn. I have students who are in many different places now; I have students who have gone on to be professors, expert fabricators, curators. Seeing them succeed is probably the best thing about it. I keep up with them on social media and see what they’re doing next.

Where do you find your inspiration?
Talk radio, listening to The Great Courses (college-level courses available on video or audio) on cassette tapes. Talking to friends; a lot of my friends are professors in areas that are very different from what I do. I was just at a party a few nights ago with sociologists, statisticians, and writers; just a wide range of people who talk about the most interesting topics. They really inspire me. Also I think being around students, too; they have a lot of really interesting energy and ways of producing things that I might not normally do.

How do you think your students would describe you?
Maybe energetic. Also I challenge them a lot and ask a lot of them. I always want them to be improving. I think I try to give them insight, I would hope. I also would say I’m pretty supportive of what they do. If they want to do something that’s not the assignment or is close enough to it, I usually let them and I help them. But also, I don’t really like to let people slack. Sometimes I will get a student who will take a course because it’s fun. That’s not going to work. Not that this can’t be fun, but it’s a ton of work. It’s a college course. You’d never expect to take a chemistry class and not expect to do work outside of class time and not be challenged by it.

What advice would you give to those artists who are starting out in the sculptor medium?
I would say learn as many skills as you can with as many different materials as you can. There’s a video I show my students almost every semester about a group of Amish men who are moving a house. They get together, they cut the sill bolts that connect the house to the ground, they get inside, and move the house. The whole house is moving and all you see is these little feet underneath, like 500 tiny feet. They grab the house from the inside and they are moving it. The idea is no one person could move the house alone. But the incremental work, the combined work of all those people, moved the house.

Make your work a habit and learn to love the process. That’s really important. Typically you’re going to hate your work for awhile, then you’re going to love it again, then you might hate it again . . . hopefully at the end you love it. You have to enjoy all those aspects. It’s like a relationship; it’s not going to always be perfectly ducky, but you have to understand there’s going to be low points as well. It’s the same thing with the relationship with your art. 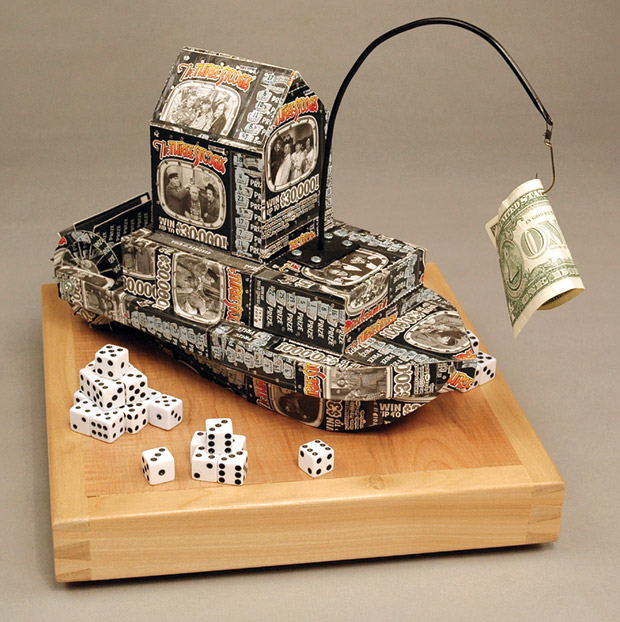