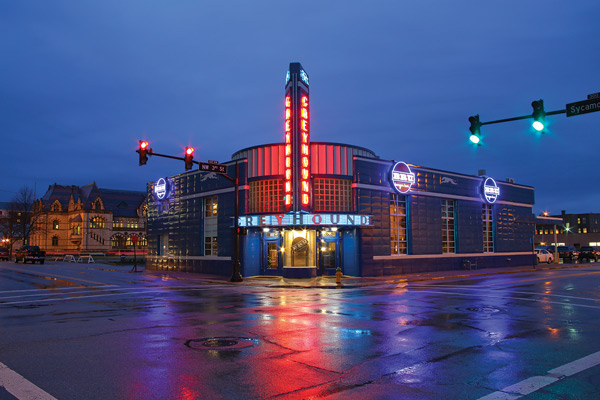 In September 2021, Indiana Landmarks transferred ownership of the old Greyhound bus terminal to Indianapolis-based Cunningham Restaurant Group, the culmination of a project started in 2014 to restore the well-known structure and bring new business to Downtown Evansville.

“The building was really quite loved in the community, and the expectation from the city was that Landmarks would repurpose the building,” says Indiana Landmarks president Marsh Davis.

With extensive interior and exterior restoration work completed in 2015, a committee of local business and community leaders reviewing business options for the facility chose a restaurant to bring an important economic element to Downtown.

“We thought, what does Evansville need Downtown? It would be great to put it back on the tax rolls and be a benefit to Downtown,” Davis says. “Ultimately, the match with CRG turned out to be a wonderful occurrence.”

When CRG’s BRU Burger Bar opened in the Greyhound building in November 2017, Indiana Landmarks kept ownership of the building and leased it to CRG, with the intent that CRG would eventually purchase the property. In the meantime, both parties shared a joint stewardship of the facility, Davis says.

“We worked with them through the process to outfit the building,” Davis says. “We retained a great interest in the property and didn’t just walk away from it.”

While CRG now owns the building, Indiana Landmarks retains a protective covenant agreement preserving the exterior of the building and must approve any plans to change or improve the “envelope of the building,” Davis says, such as walls, windows, roofing, or demolitions. Should CRG sell the property, any subsequent owners must also abide by the covenant.

With ownership now transferred to another entity, Davis says Indiana Landmarks is looking for its next preservation project in Evansville.

“We are hoping to find another project,” Davis says. “We’re heading in the right direction.”