Step into Amy Elliott Ubelhor’s studio, and you will be transported into a world of color. Growing up, her two kids Eli and Emma said it was like living inside a box of crayons. Every surface possible in her studio is covered in color and paint, from the base boards and ceiling to her desk chair and bookshelves. She has even painted the handles of her paintbrushes.

While Ubelhor works as the assistant director of creative and print services at the University of Southern Indiana and continues her freelance design and advertising out of her studio, she has always made time for painting. Even as a student at Indiana University, the California native and long-time Evansville resident studied both graphic design and fine art. She has participated in shows across Indiana like The Beehive Arts Market in Jasper, Huntingburg’s Christmas Stroll, and the Newburgh Wine, Art and Jazz Festival, as well as being part of the group to start Evansville’s annual art show Funk in the City. Ubelhor’s work also can be seen across the city at places like the Children’s Museum of Evansville, Deaconess Gateway Hospital, the Tropicana Executive Conference Center, and St. Benedict Cathedral School.

How would you say your work has changed over the years? Is it more because of what people want, or has it been because you personally have changed as an artist?

Besides the fact people are not as interested in framing things as they used to be, I also used to do a lot of pastel landscapes and gardens. Now I’m tending to do more acrylic still lifes and flowers.

The other thing I’ve been doing … these little pieces. You use a piece of glass and a wooden box and some paint. I have to paint in reverse. There’s a few I’ve driven myself a little
dyslexic-ly crazy, because I have done some with words. You start out with whatever is in front. If you’re doing the white highlights, you have to put those in first. It’s just a different way of thinking and doing things. Sometimes I get really daring and I don’t flip it over and look, just wait and see what it looks like [when it’s finished]. 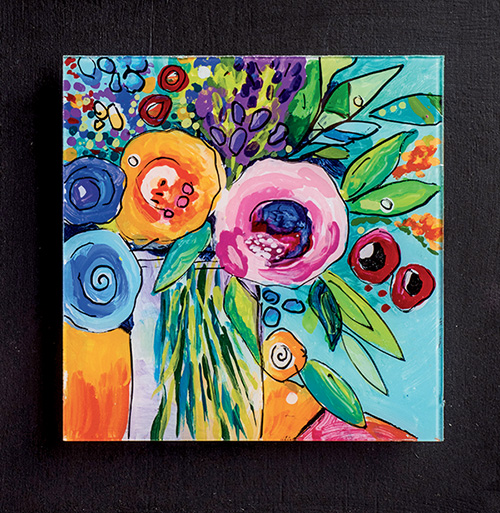 How do you come up with new ideas and prevent yourself from getting bored?

That happens. Ted, my husband, always says if he stood still here long enough, I would end up painting him. I just find things I can throw a huge amount of color on. I think color evokes an emotion, so that’s the thought behind it. The older I’ve gotten, the bolder my color has gotten, the bolder my choices have become.

Is most of the work you’re doing now stuff you paint for yourself, or do clients come to you with a specific idea of what they want?

The majority of the time it is me painting what I want to paint and then putting it out on social media. There was a show down in Nashville, Tennessee, I did a year or two ago that was a Christmas show. I did these reindeer heads and painted them. I made them to hold ornaments. They were like brown papier-mâché kinds of things. I did them just as displays, and people bought them. They’re like, “How much for the deer head?” So now I sell deer heads. It’s just the strangest thing.

Do you ever have to find the line between doing art that other people like and doing art for yourself?

I would like for there to be an artist who says that has never been a struggle. I think even Michelangelo probably had a few things to say when he was painting that ceiling. The majority of the things I do, I do because I like it.

When I first started, there was an interior decorator and she wanted me to do a painting of these people’s grandchild in their garden. I really, honest to goodness, don’t do faces. You make one little stroke and it can change the whole look of the face, and they go, “That’s not my kid, that’s not my dog, or that’s not my goldfish.” So they gave me a bunch of pictures of the kid, and I picked the one where his back was turned. They loved it.

You have to play to your strengths. 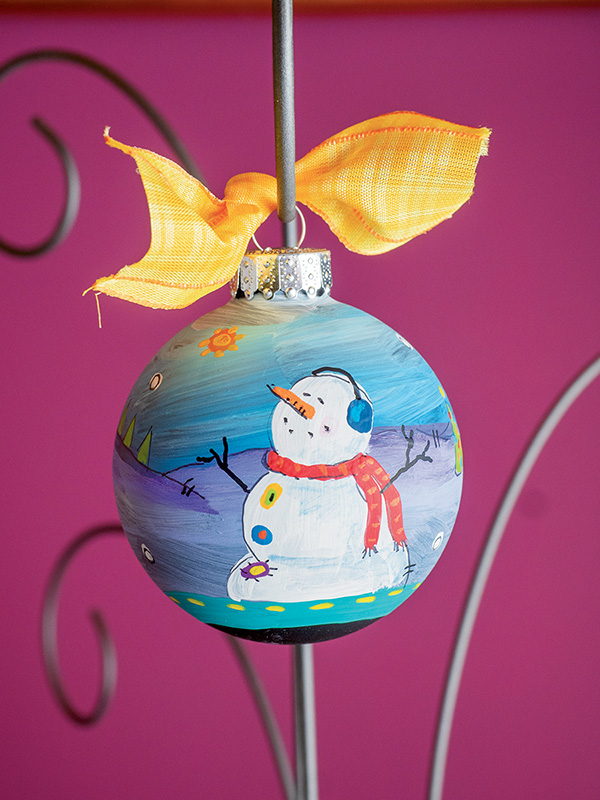 You do. You always have to. And it’s really interesting because I started out doing photorealism, and things just get funkier and looser as time passes.

Has art ever been your full-time job?

For a long time, artwork sort of was the relief to the advertising. I had my daughter, and when she was about 1 year old, I had been working in advertising. I thought I’m going to do this differently, because she needs to see you can have your cake and eat it too. I wanted to do things on my terms, and I wanted to be the popcorn lady at St. Ben’s, where my kids went to school. I couldn’t do that with a full-time job, so I did a full-time job here [from home.] I would send my kids off to school, and I would work like a mad woman from like 9 a.m. to 2 p.m. But I got to do everything the way I wanted to do it.

Then five or six years ago I said to my husband out loud — and it’s funny … you put things out in the universe — “Sometime in the not-so-distant future I need to think about something other than just being in the studio.” Out of the blue this thing at USI showed up on my Facebook page. So I do work out there, and I do work here. I still have clients, and I do lots of work here. Then when I’m not doing that, I’m painting and drawing. It has become more frequent, not because of the lack of work but because I’m starting to — gosh, it sounds so corny — but it feeds my soul. It does. I come home, whether it be from USI or whether I’m in a meeting with a client, and I’m like I’m going to sit down and paint. That’s what I want to do.