It was a coincidence that Scott Schoenike found an old postcard of the Victory Theatre on eBay. The original postcard showed him exactly what he had been searching for — the look of the former vertical marquee attached on the Main Street side of the historic building.

His search efforts were for the Friends of the Victory nonprofit group, which raises funds for theater items needed beyond maintenance. The current big mission — return a historic vertical marquee to the Victory.

“When we took over the Victory in 2012, my obvious question was there had to be some sign at some point,” he says. “And a marquee for the theater isn’t a new idea. It was always looked at as a Phase 2 project for the renovations in the ’90s.” 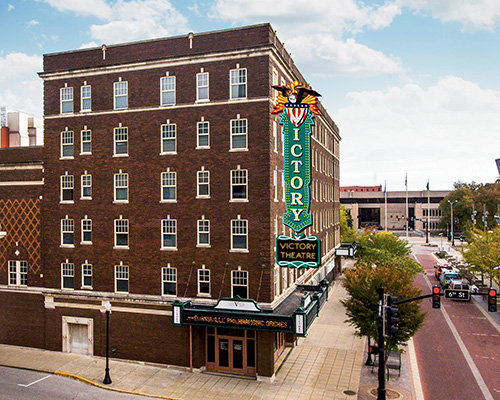 Unfortunately, that Phase 2 did not come to fruition. Today, it has become the main focus of the Friends of the Victory fundraising efforts. With renderings based off the historic first marquee, Schoenike and his group plan to place a 20- to 30-foot vertical marquee above the Main Street entrance, complete with LED lights.

“This whole corner will be completely different with that marquee,” he says. “Coming down the street, it will be like it used to be.”

The group has been successful through fundraising events such as the Seven Deadly Sins Gala and Victory International Film Festival earlier this year. Now, the project is at a point, says Schoenike, where the group can apply for grants and seek the final funding needed. The sign could go up by the 2021 season.

“Depending on your age, it’s always neat to hear what people remember the theater as. But the marquee has been gone so long, very few people remember it,” says Schoenike. “They say, though ,it makes perfect sense and that it is needed to complete the theater.”