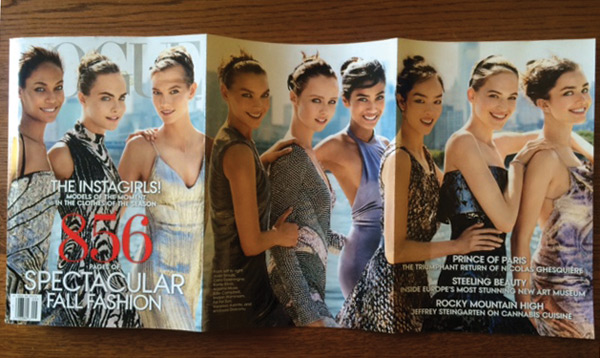 It’s the time of year I make a trip to the bookstore to buy Vogue magazine — the September issue. I rarely buy any other issue, and I don’t subscribe (though I might), well, because I’m too concerned about the back health of my postal carrier — it’s a hefty magazine.

The September issue of Vogue is the subject of a documentary, “The September Issue,” about the production of the 2007 issue, at the time the largest Vogue issue ever produced, with 820 pages.

Published just ahead of all the Fall Fashion Weeks (New York, Paris, Milan, and London — Editor Anna Wintour visits each in the documentary), the September issue of Vogue is a bellwether of fashion, art, and culture.

The 2015 September issue has 832 pages; the 2014 issue had 856 pages. Ad pages are significant: 615 ad pages in 2015 and 631 ad pages in 2014. Target is the back cover advertiser for at least the past two years; Clinique is the inside back cover advertiser, and Ralph Lauren has the inside front, including gatefold panels for the past two years. The first page of the September 2015 table of contents is on page 112.

Beyonce stars on the cover of the September 2015, and the fashion feature, where the genius of Creative Director Grace Coddington is displayed, is titled, “Forces of Fashion.”

When former Evansville Living Creative Director Laura Mathis left our company last year to work in Owensboro, Kentucky, she gave me “The September Issue” DVD and a beautiful book, “Vogue: The Covers” (2011, Abrams, New York). I have enjoyed reviewing Vogue covers since 1892!