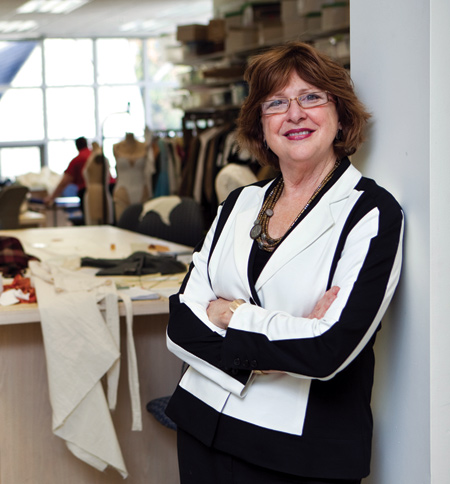 Pinned with tacks on the walls of the University of Evansville’s design conference room are old photographs — black-and-white images of a 1950s tearoom from the play Master Harold … And the Boys intermingle with portraits of barelegged strippers. These photos serve one purpose in the UE theatre department: inspiration. For five months, Patti McCrory, a theater professor and costume designer, and her students have been preparing the Shanklin Theatre stage with the most important props — the costumes — for UE’s November production of Gypsy, a musical about a 1950s burlesque dancer.

The show requires more than 90 extravagant, colorful costumes. The creation story for these pieces begins with research; McCrory found inspiration in blonde bombshells and busty corsets. “She’s extremely helpful with character development,” says Scott Lank, UE play director and professor of acting and playwriting. She discussed thoroughly with Lank and the design team each specific character in Gypsy. From there, McCrory went to the drawing board before getting out the sewing machines. Remnants of this process are evident in the designer’s office. Books of drawings pile in one corner, and other stray sketches lie under the lamppost of her work desk, protected by the laminated crescent board where she creates most of her art. For her, the drawing is where the ideas come to life. “It is a real pleasing part for me,” she says. “It is like going to heaven. And I don’t know what I will have until I am finished.”

Her love of design goes back to McCrory’s Alabaman childhood home where she frequently molded creative sets and scenes out of red clay or wallpapered dollhouses with magazine cutouts. In college, that imagination propelled her toward a bachelor’s degree in theater from the University of Alabama, Tuscaloosa and a master’s degree in dramatic art from the University of California, Santa Barbara. Since coming to UE in 1988, McCrory landed a 2003 fellowship at the Kennedy Center in Washington, D.C., and was given an art grant to attend Accademia Italiana in Florence, Italy in 2005. She also has spent multiple summers at UE’s Harlaxton College in England as a visiting professor.

Now into her 23rd year at UE, McCrory finds teaching to be a very rewarding part of her career. Her students are “really hungry for work,” she says. Again, “it’s kind of like being in heaven. They are so driven.” McCrory teaches in a nationally acclaimed program, and one lesson she passes onto her students: Costume design isn’t about personal style. She lets her students play. “In Gypsy, we wanted the things on the stage to look haggard and homemade,” she says. “Kind of like Halloween costumes.” But in September’s performance of Master Harold, some scenes called for subtle colors of creams and beiges to mimic a dreamlike perspective. Her designs, however, aren’t successful unless the actors are comfortable in them. “She wants to hear their opinion,” Lank says. “She’s very good at responding to certain needs.”