It’s a motto David Parker believes not only helps form a great staff for his restaurant, Prime Time Pub and Grill, but also keeps his customers coming back for more.

“We have a real simple recipe —take care of your people, be involved in your community, and make sure your place is clean,” says Parker. “You do those three things and you’ll always have a successful business.”

Parker, a Paris, Illinois, native who moved to Newburgh, Indiana, with his family in 2005, opened the sports bar in March at the former spot of Beef O’Brady’s in Newburgh. Though it is the first restaurant of his own, he is no stranger to the food industry.

Parker has had a home in restaurants his entire career. His start began like many others in the business — working as a dishwasher, then a cook. After graduating from Eastern Illinois University, Charleston, Illinois, with a bachelor’s degree in communications, Parker moved to St. Louis with the intent to work in public relations. But his path changed when he was hired on at Caleco’s Bar & Grill, a downtown St. Louis spot. 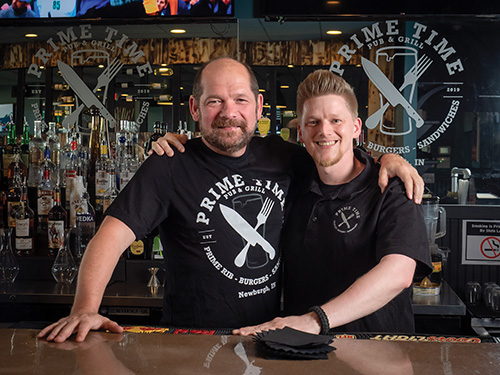 His career has seen him open and manage many restaurants, jazz clubs, and businesses. Being named an area director for Applebee’s brought him to the Newburgh area. Parker eventually moved to a regional director position with Cosi (a sandwich restaurant company with locations in the Midwest and along the East Coast), and then to Sky Zone as director of company operations in the U.S.

In 2018, he felt it finally was time to pursue his goal of owning his own establishment and formed the Parker Management Company. His intent was to have a restaurant with a model that focused on its team members.

“One of the things we talked about in the beginning is teamwork, and it has stuck since the beginning,” says Prime Time bar manager Katie Schiaffredo. “I think it has a positive impact on us.”

Parker settled on Prime Time’s current location when he learned Beef O’Brady’s would leave the spot on Bell Oaks Drive. He immediately went into action to acquire the spot. From there, renovations of the restaurant went quickly.

“It took about seven weeks, but honestly it was because we didn’t have a lot of construction,” says Parker. “Paint, colors, reducing the number of televisions, trying to get the look and feel we wanted to get in here.”

The goal was to give locals a place they would want to come and hang out. As Parker and his team were building their menu and drink lists, he immediately took to social media to ask the people of Newburgh what they would like to see.

“I think what’s really been cool about here is this turned out way better and different than we originally thought because we incorporated the ideas of other people,” he says.

As the public responded on social media, Parker also took into consideration input from his team members — he says currently there are several menu items inspired by different cooks in the kitchen, and more are on the way. 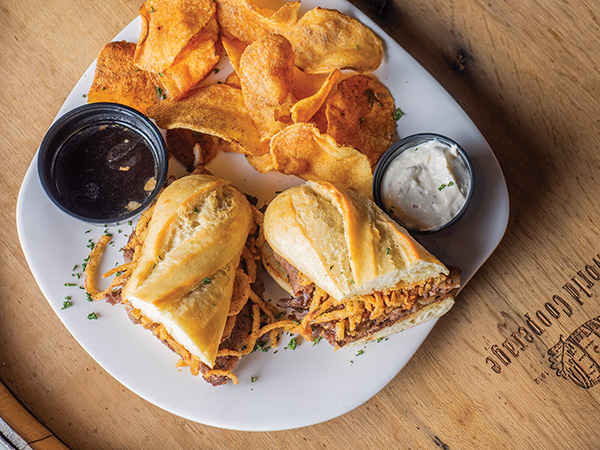 “It truly is a ‘for the people, by the people’ mentality,” says Prime Time General Manager Mark Hellems. “People who are on the ground have a lot of insight.”

That insight has helped Prime Time create a menu with fun and mouth-watering selections. Parker calls many of the menu choices “craveable items,” and often jokes he and his staff simply are attempting to ruin diners’ appetites.

One such dish is the Prime Dip — with thinly shaved prime rib, melted smoked gouda, and crispy onion straws placed on a garlic toasted baguette and sides of au jus and creamy horseradish, the sandwich is by far one of the most favorite of customers so far.

“It’s just really versatile,” says Hellems. “It gives you a really hardy, savory flavor, but it also gives it to you in a lighter portion.”

The crew at Prime Time also dishes up a challenge for daring customers — the restaurant’s signature Meet the Meat burger. Stacked high with a half-pound burger patty, barbecue pulled pork, hickory smoked bacon, onion straws, smoked gouda cheese, and topped with the house Prime sauce, the dish was thought up by Parker and a friend during a road trip.

“It was just us driving down the road talking. Then we came back and actually built it and, oh man, it was so good,” says Parker.

The Cheesy Mac — which can be ordered as an entrée or side item — is one menu item Parker says he’s fond and proud of. One of the first recipes built for Prime Time, it features macaroni noodles smothered in white cheddar cheese and smoked gouda, then topped with a garlic bread crumble, thick-cut hickory smoked bacon pieces, and green onion.

“The bacon pulls the smoke out of the gouda, the crumb gives it a little texture with a hint of garlic, and the dish is ridiculous,” Parker says. 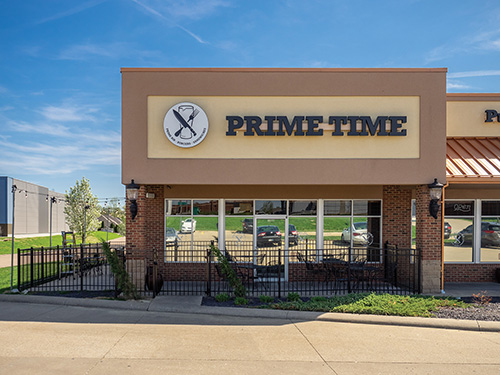 Each table also gets a serving of Prime Chips as soon as guests are seated — house-made potato chips doused with a special seasoning. From the bar, Prime Time offers 25 draft beers, a selection of 24 bourbons, and a wine list.

So far, the restaurant has only been open in the evenings. But at the end of April, Parker and his staff began to welcome in the lunch crowd on Fridays, Saturdays, and Sundays starting at 11 a.m.

Parker says he and his staff are continuing to fine tune their model, create more delicious dishes for the menu, and give their customers an experience that will have them coming back for more.

“I want people to leave feeling better than when they came in. As corny as it sounds, that’s what really is important to me,” says Parker.