Queen of the Field 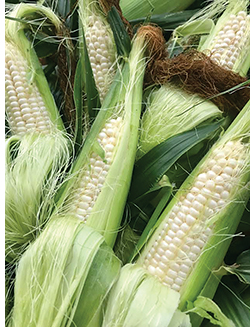 A staple of summer feasts is plentiful ears of freshly picked corn, and there is none sweeter than Silver Queen.

Paul Mayse, owner of Mayse Farm Market at 6400 N. St. Joseph Ave., says this year’s crop of Silver Queen white sweet corn has been planted and will be ready for harvest around mid-July. Silver Queen is typically available through August or, if the weather permits, September.

Silver Queen is set apart from other variations of corn by its plump white kernels and enduring sweetness. Tender with a hearty crunch off the cob, Silver Queen’s versatility makes it a big hit with produce shoppers.

“We raise several types of sweet corn, and the Silver Queen is the most popular because it’s the sweetest,” says Mayse, son of Mayse Farm Market founders Vance and Minnie Belle Mayse. “We’ve been growing it over 50 years, and some markets don’t sell it well. It’s our number one seller. People have been buying it for generations.”

“We’re also about the only place that grows it (locally); you can’t find it in grocery stores or anywhere around here,” Mayse adds. “We raise about 25 acres of sweet corn, and we have around 18 acres of it as Silver Queen. You’re talking around 15,000 dozens.”

The Silver Queen variety of sweet corn is best enjoyed soon after it’s picked. Whether seared on the grill, smashed into fritters, or sliced off the cob and frozen for a future meal, Silver Queen retains its famous flavor for any feast.

Mayse Farm Market sells Silver Queen sweet corn by the dozen and half-dozen, and off the cob in packages.