R is for Riverfront 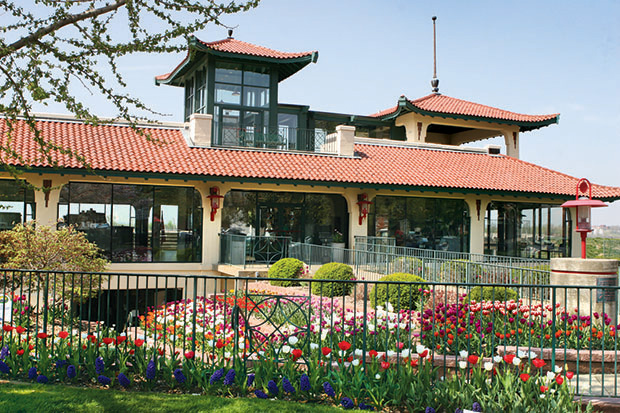 What would Evansville be without the Ohio River? Surely not the same — after all, we are nicknamed the River City. Integral to the founding and sustainability of the city, the river is Evansville’s greatest resource. It offers haven to many local businesses, attractions, and community centers — such as the ones below — looking to capitalize on its beauty.

Evansville produced more Landing Ship-Tanks (LSTs) for World War II campaigns than any other inland shipyard in the U.S. The particular ship docked in Evansville, LST-325, transported equipment and troops to and from Italy, Tunisia, England, France and Ireland. Her impressive service history includes its part in the back-up force for the Allies’ D-Day invasion at Omaha Beach, France, in June 1944. After WWII, LST-325 participated in U.S. military operations in the north Atlantic before being transferred to the Greek Navy in 1963. She was decommissioned in 1999, acquired by an American historical group in 2000, and returned to the U.S. A beloved Evansville attraction since 2001, the LST-325 hosts regular public tours and recently moved north along the riverfront and now occupies the space downtown where the former casino boat used to be moored. (The casino moved ashore in 2017, and the former “City of Evansville” casino boat is now docked in New Orleans as an event center.) 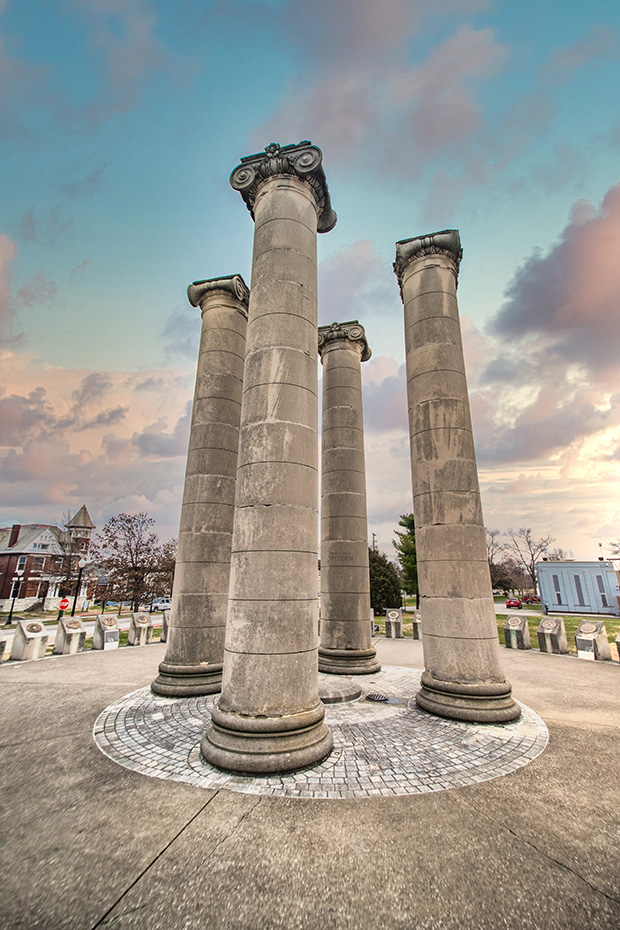 Designed by Rupert Condict and erected during the United States’ bicentennial in 1976, the Four Freedoms monument sits at the riverfront’s midway point and pays homage to America’s freedom of speech and religion, and freedom from oppression and fear. The monument includes ties to America’s earliest history: 13 steps representing the original 13 colonies lead to the columns, which are surrounded by 50 pedestals, each naming one state. The limestone columns date back to 1882 and originally framed the entrance of Evansville’s C&EI Railroad Depot.

As part of a community effort including 800 businesses, organizations, and families, Mickey’s Kingdom off Riverside Drive is a 21,000-square-foot playground built in 2018 for children of all abilities. The park structures were made from recycled milk jugs and have a rubber surface. The playground is also home to the world’s tallest solar-powered CommuniTree.

Located off Waterworks Road on the Ohio Riverfront, KC’s Marina Pointe is an outdoor, open air bar and grill, nightclub, and restaurant. Serving everything from peel-and-eat shrimp to catfish bites, wraps, and burgers, Marina Pointe has the perfect casual beach food with a spectacular view of the Ohio River.. 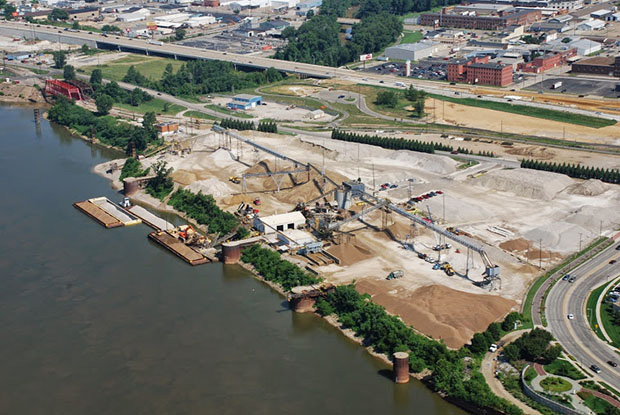 Mulzer Crushed Stone, based in Tell City, Indiana, opened its depot on the Evansville Riverfront in the mid-1960s and has been here ever since. The depot supplies crushed limestone, sand, and gravel used in construction projects, including aggregate for highways. Founded by Roland Edgar and Arnold Mulzer Sr., the company has eight depots in Indiana and was bought out in 2017 by Ireland-based building materials company CHR.. 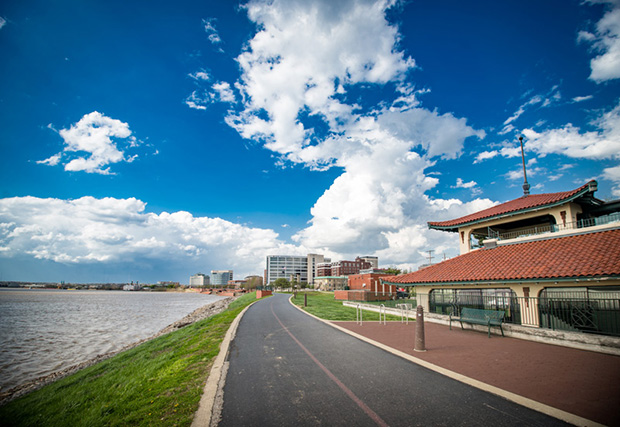 Built to run parallel to Riverside Drive from Pigeon Creek to Downtown, the esplanade is equal parts recreational and educational. In addition to trails appreciating the riverfront’s beauty, passersby can enjoy the many historical markers along the trail — including those detailing the Korean War Memorial and the Ohio River levee — which appropriately lead to the Evansville Museum of Arts, History & Science downtown. 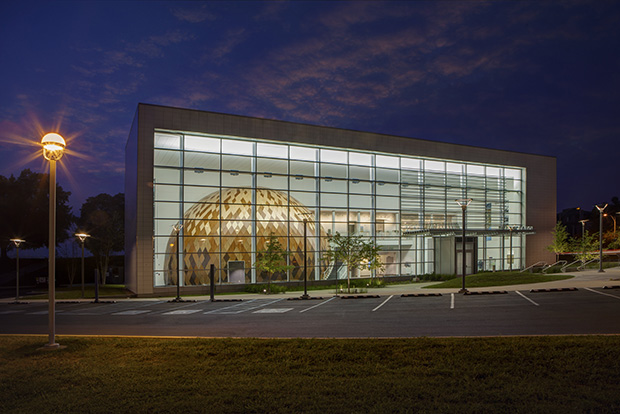 A major riverfront draw, Evansville’s multi-faceted museum appeals to a broad range of interests. Its history section includes important exhibitions on Evansville and Abraham Lincoln. The arts department hosts traveling exhibits as well as an impressive permanent collection of artworks and artifacts, and the Koch Immersive Theater and Planetarium offers lively, impactful presentations of astronomy, sea exploration, mathematics, and more.