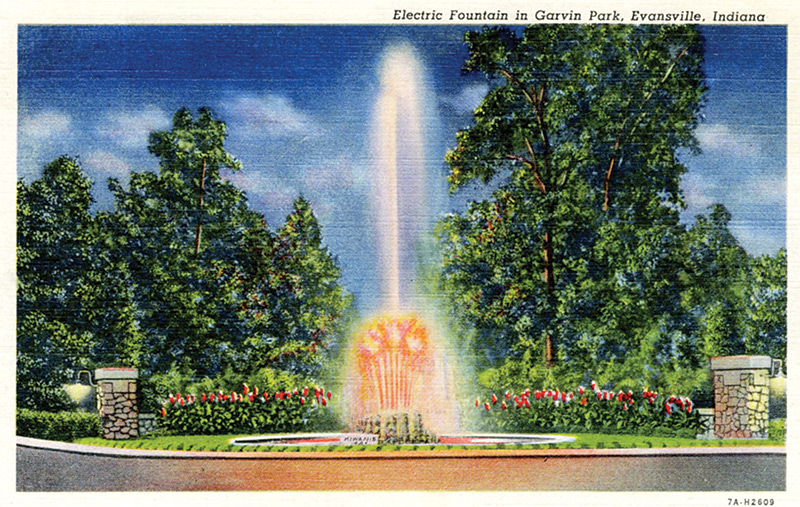 Thomas Garvin arrived in Evansville in the mid-19th century with $7 in his pocket. He soon became a prominent lawyer. The white-collar worker bought land on the North Side for a picnic grove. After his death, Garvin’s heirs sold the land in 1915 to the city, and the 80-acre Garvin Park became a reality.

Ten years later, a local Kiwanis Club oversaw the creation of Garvin Park’s fountain. The fountain “was always called the gateway to the north of Evansville,” says longtime Kiwanis member Jim Morgan. During its 87 years, the ornate fountain has undergone a series of restorations, most notably in 1936 after a car hit it.

In 1989, Operation City Beautiful (now Keep Evansville Beautiful) created a $10,000 fund to maintain the local landmark. Though the organization has dedicated more than 20 years to preserving the fountain, according to Ann Ennis, KEB’s executive director, lately the fund has not been enough. The octogenarian fountain needs help. The water has not worked for years, its walls are crumbling, and the landscaping is overgrown.

In early 2011, Ennis launched a new campaign to restore the fountain, and KEB is looking for donations to return it to its grandeur. The nonprofit has raised $36,000 of the $53,000 goal. KEB leaders intend for a complete makeover: overhauling the fountain’s mechanical system, repairing the gates and cobblestone wall, and refurbishing the landscaping.

The biggest change will be a new energy-efficient, multicolored LED lighting system. “It’s been lit since 1956,” says Ennis, “but this time, we are going for a much more extraordinary, unique show.” The donations also will contribute to the fountain’s maintenance fund to sustain the improvements. “People love this city,” says Ennis, “and people love its history.”