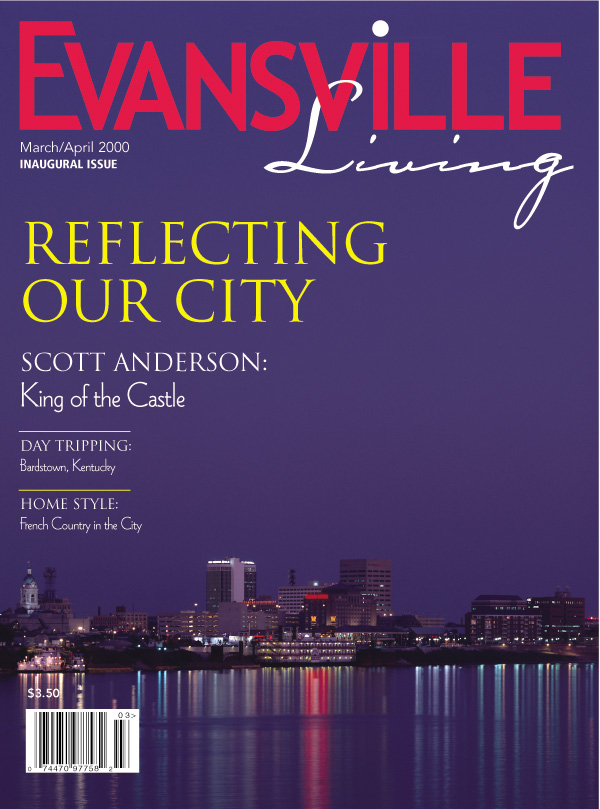 It should be no surprise that in the creative offices of Tucker Publishing Group math isn’t our forte. When confronted with the March/April 2019 issue, we knew we had hit a milestone but didn’t know exactly how it should be celebrated.

Our inaugural issue was the March/April 2000 issue, which makes this the 20th March/April issue and Evansville Living’s 19th anniversary. Looking back, it is exciting to see the many changes and developments the city has undergone since that first issue. The cover photo, shot by Henderson, Kentucky, photographer Fred Reaves, showcases Evansville’s riverfront as of fall 1999. Today the area looks a little different.

In 2004, construction was finished on the Old National Bank headquarters at 1 Main St. Two years ago, Riverside Drive welcomed the state’s first land-based casino, the new Tropicana Evansville, and sent the riverboat south to New Orleans.

The first home story featured a French country estate complete with animal print furniture and brass fixtures. The cover story looked at the restoration of several historic Evansville buildings by Scott Anderson, now the program coordinator of computer science at the University of Southern Indiana. Anderson was behind the preservation of landmarks like the Old Vanderburgh County Jail and Sheriff’s Residence, the old Farmer’s Market (now the offices of Fire & Rain), the Old Post Office Retail Village, and the General Cigar Building (now home to Tucker Publishing Group).

Even more impressive than the city’s developments are the aspects that have remained unchanged including the businesses, public institutions, and community members still shaping the community. After 19 years, Evansville Living’s mission also has endured as Editor Kristen K. Tucker stated in her first Editor’s Letter:

“Founded on the sincere belief that the Evansville area is an exciting, diverse, and unique place to live in and write about, our goal is to inform, instruct, amuse, and entertain our readers — to help you get the most out of living here. We want Evansville Living to be your personal guide to the city — and region — you love.”