At 10:45 in the morning, Leigh Ann and Larry Weinzapfel gathered up their two children, Lucas and Laci (17 and 14 at the time) and departed from Evansville on a planned trip to Russia. Though family vacations are not exactly an oddity, this journey for the Weinzapfels would provide more than just sightseeing.

With the help of an organization called The Ties Program, Leigh Ann and Larry were taking the children back to their birth country to learn about their pasts and families.

“Laci had been asking for a really long time — she wanted to know more about her biological family and about Russia,” says Leigh Ann.

After almost a year of planning, the family set off on July 20, 2016. The first day of travel was not a short one for the Weinzapfels — by 9:49 p.m., the family still had a seven-hour flight before landing in Moscow. During that final trek on the first day, Leigh Ann took out a small journal and pen. For the journey, she decided to chronicle the family’s adventure — on the first day, she recalled her very first trip to adopt their son Lucas.

▲ The Russian Connection // Larry, Lucas, Leigh Ann, and Laci Weinzapfel — posing here in front of Saint Basil’s Cathedral in the Red Square in Moscow, Russia — traveled to the country in the summer of 2016. The journey was to help Laci and Lucas find their birth families and learn about Russia. Bottom left, Leigh Ann’s journal she kept during the trip. Above, the family visited St. Petersburg, Russia, and the Peterhof Palace during the trip.

“My goodness, I was so scared. I can feel those feelings just as if it were yesterday. We were so naïve,” she writes. “For people of our generation, it might as well have been Mars. Growing up, the U.S.S.R. was our enemy — someplace to fear.

“However, I soon figured out people are people wherever they are. Humanity is our common bond. I’m sure I will find the same still is true in 2016. Only six hours and 32 minutes to go.” 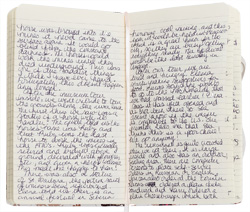 Leigh Ann and Larry, partners at Weinzapfel & Co., LLC certified public accountants firm, were married in 1996, but cannot remember exactly when they started their journey to adopt. The couple tried domestic adoption first, traveling to Indianapolis to speak with a private agency. When that failed, they turned to international adoption. In 1998, they contacted Keith Wallace with the former Families Thru International Adoption, Inc. in Evansville and began the process again.

“Still, that took a long time,” says Leigh Ann, “but we knew there was a light at the end of the tunnel.”

Finally, after two years of filing paperwork, participating in home studies, and other processes, the couple was able to travel to Ulyanovsk, Russia, to pick up their son Lucas, who was 13 months old at the time. Three years later, Leigh Ann and Larry would go through the process again, traveling to Polysaevo — this time to adopt their daughter Laci when she was 17 months old.

The next time the Weinzapfels would travel to Russia would be in 2016. The family began to plan the journey in fall 2015, when Laci’s questions about her birth family led Leigh Ann and Larry to reach out to The Ties Program, a business based in Wauwatosa, Wisconsin, that specializes in adoptive family homeland journeys. 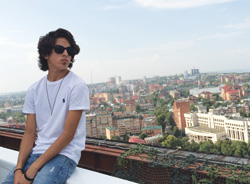 A private investigator took all of the documents the Weinzapfels had collected about Lucas’ and Laci’s birth families and traveled to the cities to find family members and speak with the orphanages. By summer 2016, the Weinzapfels were armed with information and plane tickets to Russia.

After a few days exploring the sights of Moscow with other families traveling with The Ties Program, the Weinzapfels caught a flight to Kemerovo and Polysaevo. It would be here where they would visit Laci’s orphanage and family members — two first cousins, Ann and Tatiana, and a second cousin Ludmilla.

▲ Sight Seeing // Top, the Palace Square in St. Petersburg, Russia, was one stop on the Weinzapfels’ trip. Above right, Lucas takes a rest on top of a restaurant overlooking Ulyanovsk. Below right, Laci hugs a nurse at her orphanage in Polysaevo. After 13 years, the nurse recognized Laci by her eyes.trip.

In her journal, Leigh Ann writes about being a bit nervous and scared for Laci, who seemed on edge. When the family arrived at the orphanage, Leigh Ann panicked at not recognizing the building, but the fear soon was put to rest when seeing the inside and recognizing hallways and other aspects of the space.

While talking with the director of the orphanage, a nurse came into the room with a file on Laci — upon seeing the girl, she began to gesture to her eyes. The nurse recognized Laci after 13 years, saying she remembered her eyes. 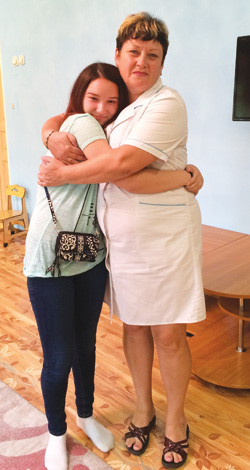 “I hugged her, and I just got this overwhelming emotion. I started crying,” says Laci, a shophmore at Evansville Christian School. “I can’t even tell you why. I was happy. I felt kind of at home. I don’t exactly remember that place, but it was the feeling of being there. It’s a thing that never really goes away.”

“It was nice to know someone had cared and remembered her,” says Leigh Ann.

On the second day of their visit to the area, Kristina invited the family to her home in the countryside. When they arrived, they were surprised to find a huge party greeting them. Members of Kristina’s husband’s family along with their neighbors all gathered with food and music to celebrate the Weinzapfels’ visit.

“They had never met any foreigner before. We were a big deal in this little town,” says Leigh Ann. “They were so excited and so welcoming to a bunch of strangers.”

At one point during the celebration, Kristina’s father-in-law pulled out a small accordion-type instrument to play music, which Lucas and Kristina got up and danced to.

“When we went to my orphanage, it was exactly how I thought it would be,” says Lucas, a senior at Evansville Day School. He had not been on board for the journey at the beginning. “But the orphanage didn’t really matter. It was about meeting actual family members, and that redeemed it.” 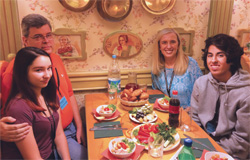 “Ultimately, they were all wonderful people. You couldn’t have picked better people to have met,” says Larry. “They were thrilled to meet the kids; they were happy for them.”

Both Lucas and Laci say they plan to visit Russia and their birth families again someday. While Laci seems eager to go as soon as she can, Lucas is ready to wait until he is more settled with a family of his own.

Looking back on the experience one year later, all the Weinzapfels agree the family vacation to Russia was one they all would never forget.
“Lucas did say after it was over, it was the best vacation we ever had,” says Leigh Ann. “I think we all said that.”

“The trip wasn’t what I expected,” adds Lucas.

For Laci, who started the wheel of planning, she says she came home feeling as if she found more of herself on the journey.

“When I came back home, I felt like a new person. It was very positive, and I would do it all over again,” she says. 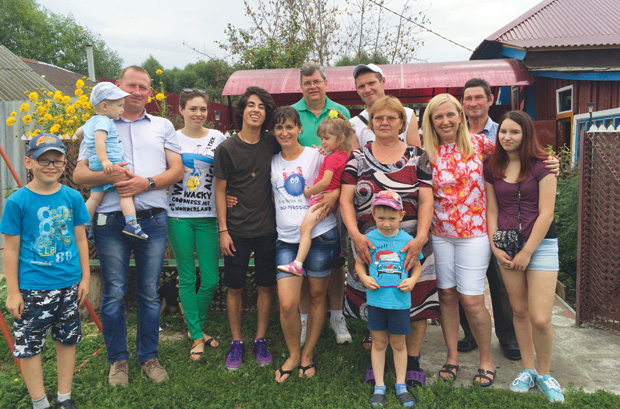 ▲ Family Portrait // Lucas’ sister Kristina — seen in the center of this group picture to the right of Lucas — invited the Weinzapfels to her family’s home for a party during their stay in Ulyanovsk, Russia. The family was overwhelmed by the kindness the group showed to them even though they were complete strangers. Above right, The Weinzapfels say their dining experiences in Russia also were an interesting aspect of their trip. Fast food chains like McDonalds and Kentucky Fried Chicken were nothing like the U.S. versions. “They just cook things differently,” says Larry. “Things are just different.”
Share
Facebook
Twitter
Previous article
True Grit
Next article
Haunted History