Retreat to the Smokies

While the travel industry is in limbo with the COVID-19 virus now spreading across the U.S., it is important to remember this, too, will pass, and by summer we are likely to again be freely planning vacations and trips. If your escape is domestic, consider a visit to the Great Smoky Mountains — Gatlinburg, Sevierville, and Pigeon Forge, Tennessee, and the surrounding counties.

(Editor’s Note: As of March 26, the Great Smoky Mountain National Park is closed to visitors due to COVID-19 restrictions.)

Ridge upon ridge of forest straddles the border between North Carolina and Tennessee in Great Smoky Mountains National Park. World renowned for its diversity of plant and animal life, the beauty of its ancient mountains, and the quality of its remnants of Southern Appalachian mountain culture, Great Smoky Mountain National Park is America’s most visited national park.

I visited last fall to experience the vibrant colors of autumn. My first stop was to board a bus with Cades Cove Heritage Tours for a drive into Cades Cove, the most visited part of the Great Smoky Mountains National Park. This entrance to the park is located in Townsend, Tennessee (Blount County). Our bus driver and guide Mark Snyder told us within the Great Smoky Mountains National Park there are 800 miles of trail.

“You can go anywhere you want within the park,” says Snyder. “But you’d better know where you are going.”

Within the 10 minutes of our drive, we spotted a mother bear and her cubs around a fallen tree. Be prepared for bear sightings; you will know when the traffic stops. Be prepared, as well, for very slow traffic on the loop drive of Cades Cove, especially during peak color. 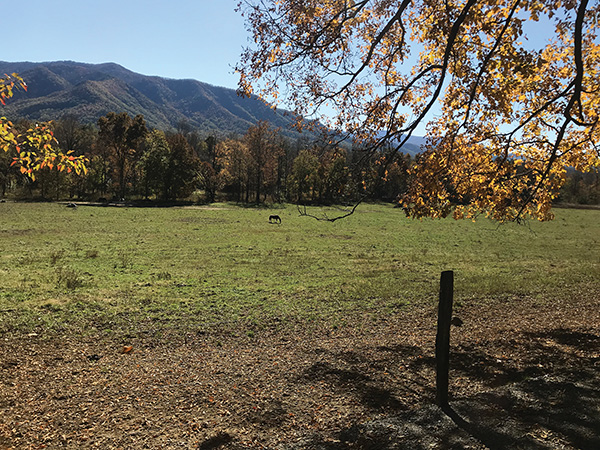 Our group stayed in more than one hotel on the trip to be convenient to certain attractions each day. The first night we checked into the R.T. Lodge on the campus of Maryville College in Maryville, Tennessee, which dates to 1932 when Susan Wiley Walker moved to Tennessee from Pennsylvania to be near her sister who was married to the Maryville College Chaplain. After seeing her sister’s home located in the woods, Mrs. Walker decided she wanted her residence, too, on campus in the forest.

She persuaded the college to let her build on the property if she willed the home to the college upon her death. She named her 26-room home Morningside and lived there until her death at age 98. In 1997, Ruby Tuesday, Inc. the restaurant conglomerate headquartered in Maryville acquired Morningside and developed the property as a hotel, destination wedding venue, and corporate retreat. 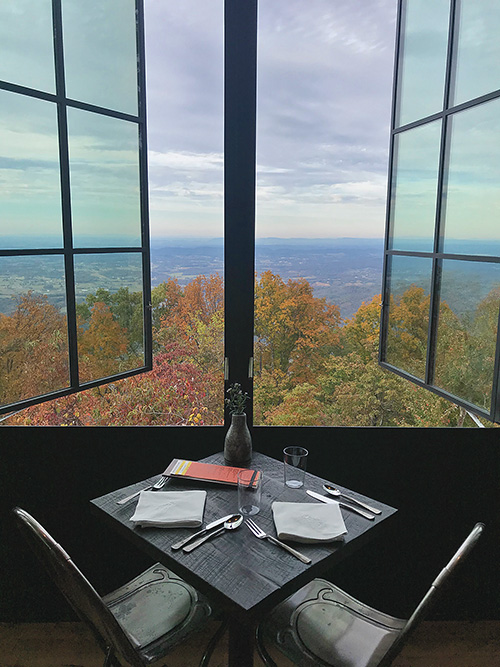 Our first full day was spent at breweries in Maryville and then on to tour a property that has long held a fascination for me — Blackberry Farm, and now the newly developed Blackberry Mountain.

Round 6 Brewing is located in a former concrete plant and operated by husband-and-wife team Will and Kathy Wesselman. Named to reflect his “sixth career,” Wesselman is a licensed electrical engineer and general contractor who previously served as a nuclear-trained submarine officer for the U.S. Navy. Round 6 incudes a tap room, a brewery, and a beer garden.

Blackberry Farm Brewery, with its roots in Tennessee Farming, brings the famed name to its brewery and tasting room in Maryville. Rustic, rooted, and refined is the brewery’s mantra. The brewery specializes in Belgian-inspired beers like the classic Saison and offers Ziegenhugel, traditional kolsch service.

Lunch that day was at the Walnut Kitchen, founded on the premise that a great butcher is at the heart of a restaurant’s meat program. The menu includes dry-aged beef and old-world-style cured meats like bacon and country ham.

I have never stayed at Blackberry Farm and did not on this trip but was afforded a complete tour. At around $1,000 per person, per night, with a three-day minimum stay, and liquor and activities not included (but the notable farm-to-table dining experiences are included), staying at the Farm, or the new Mountain, is an investment.

For the rest of the five-day trip, our group of journalists stayed at the Appy Lodge in Gatlinburg, and the Lodge at Five Oaks, both owned by the local hospitality company Oak Tenn Lodging. A stay at the Appy also serves as a primer on the Appalachian Trail. Photography, trail signs, and other historic displays on the trail line the hallways. 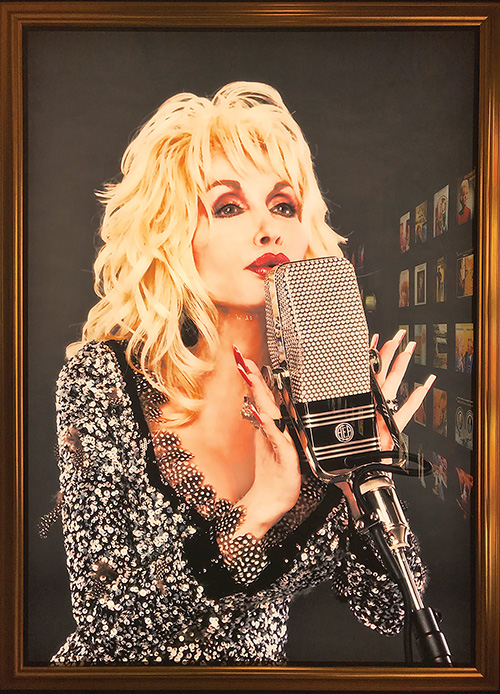 A trip to the Smokies is not complete without visiting the dream of the grand dame of mountain life, Dolly Parton’s Dollywood and Wildwood Grove in Pigeon Forge.

Dollywood Senior Public Relations Manager Wes Ramey says, “Dolly is dreamer in chief. That is really what we call Dolly. For Wildwood Grove, opened just last year, she started talking about what she loved as a child. Her stories are what inspire the park.”

Just as we devoted a day to beer, distilled spirits also get their due in Tennessee. We headed to neighboring Cocke County and Hartford, Tennessee, stopping first to lunch at The Bean Tree along the Pigeon River. The quaint restaurant is popular with kayakers and offers vegetarian friendly and vegan options.

Bootleggers Distillery founder Darrell Miller was raised on a small dairy farm in Dandridge, Tennessee. Miller explains to us what we call moonshine is defined not by a particular spirit (bourbon, whisky, or moonshine) but by the avoidance of taxation. Moonshiners throughout history owned their own stills and did not pay taxes on what they distilled. Today, legal distilleries bottle a moonshine-style spirit (often flavored) that is state regulated and taxed. It is illegal to distill alcohol without a distilled liquor permit. Miller’s daughter Taylor Miller Clay became the state’s youngest distiller when she received her permit before her 21st birthday, in what Miller described as a special circumstance. 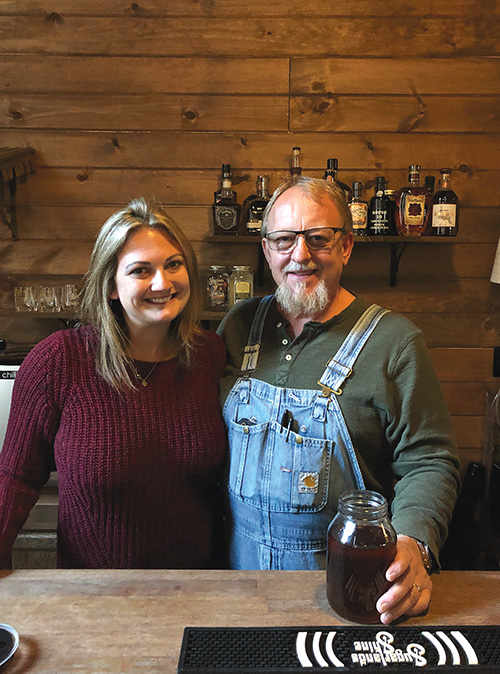 We also met Digger Manes, the famous moonshiner from the popular Discovery Channel series, “Moonshiners.” We visited with Digger at the Back Alley Grainery, essentially his private drinking room above his wife’s boutique in downtown Newport, Tennessee, in Cocke County. Digger is a reluctant television star, though he does seem to relish it a bit.

“I didn’t want to make TV liquor,” he says. “I didn’t see any reason to talk about our making liquor illegally.”

Apparently, the folks at Discovery Network and the legions of fans saw what Digger could bring to the show — he has been featured in seasons four through eight.

At D&S Distilling, science and art are combined to produce the first USDA certified organic distilled products in the state of Tennessee. I tried a beautiful Bloody Mary in their attractive tasting room. 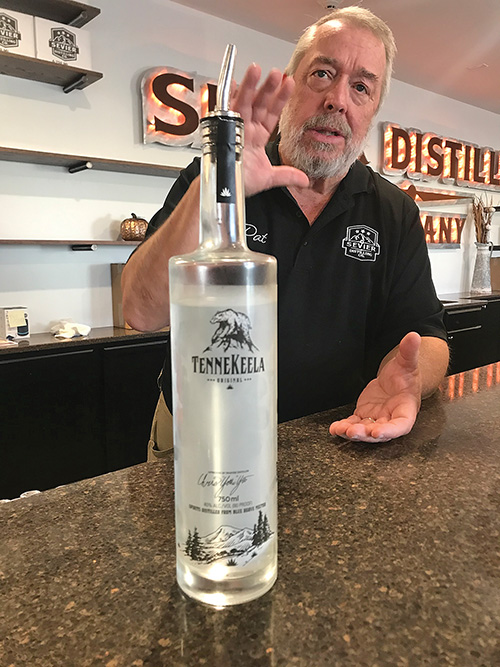 In Sevierville, be sure to witness the revitalization of downtown by stopping for lunch at Graze Burgers at this modernized gem.

Toward the end of the week, back in Pigeon Forge we toured Dollywood’s DreamMore Resort and enjoyed Song & Hearth, the resort’s signature restaurant. Dominating the skyline in Pigeon Forge is the Great Smoky Mountain Wheel, a 200-foot observation wheel at The Island in Pigeon Forge, a complete entertainment and shopping destination.

A trip to Gatlinburg must include mountain-viewing opportunities. Located at the top of the SkyLift, the Gatlinburg SkyBridge is the longest pedestrian suspension bridge in North America. From the mountaintop SkyDeck, the SkyBridge stretches 680 feet across a deep valley in a single span.

Anakeesta is a 70-acre mountaintop attraction in downtown Gatlinburg. It opened in 2017 and a year later was awarded the Best Attraction of the Year by Tennessee Hospitality and Tourism Association.

If you know Gatlinburg, you still will find what you love, including its famous pancake houses, dinner shows, and souvenir shops. Dig a bit deeper, though, as we did and one of the top tourist destinations in the U.S. will shine in a new light.