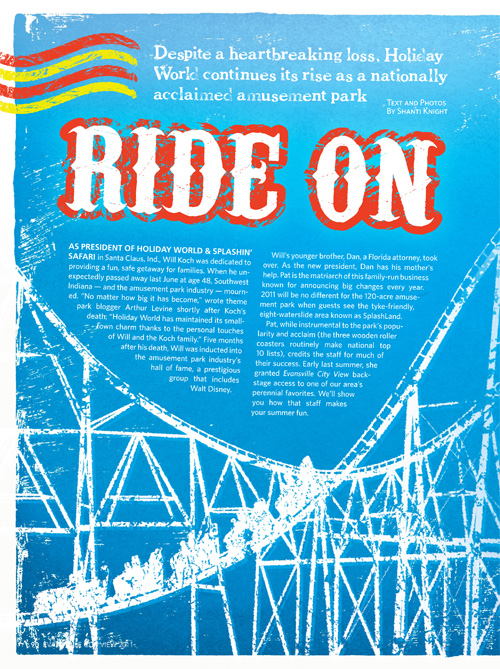 As president of Holiday World & Splashin’ Safari in Santa Claus, Ind., Will Koch was dedicated to providing a fun, safe getaway for families. When he unexpectedly passed away last June at age 48, Southwest Indiana — and the amusement park industry — mourned. “No matter how big it has become,” wrote theme park blogger Arthur Levine shortly after Koch’s death, “Holiday World has maintained its small-town charm thanks to the personal touches of Will and the Koch family.” Five months after his death, Will was inducted into the amusement park industry’s hall of fame, a prestigious group that includes Walt Disney.

Will’s younger brother, Dan, a Florida attorney, took over. As the new president, Dan has his mother’s help. Pat is the matriarch of this family-run business known for announcing big changes every year. 2011 will be no different for the 120-acre amusement park when guests see the tyke-friendly, eight-waterslide area known as SplashLand.

Pat, while instrumental to the park’s popularity and acclaim (the three wooden roller coasters routinely make national top 10 lists), credits the staff for much of their success. Early last summer, she granted Evansville City View backstage access to one of our area’s perennial favorites. We’ll show you how that staff makes your summer fun.