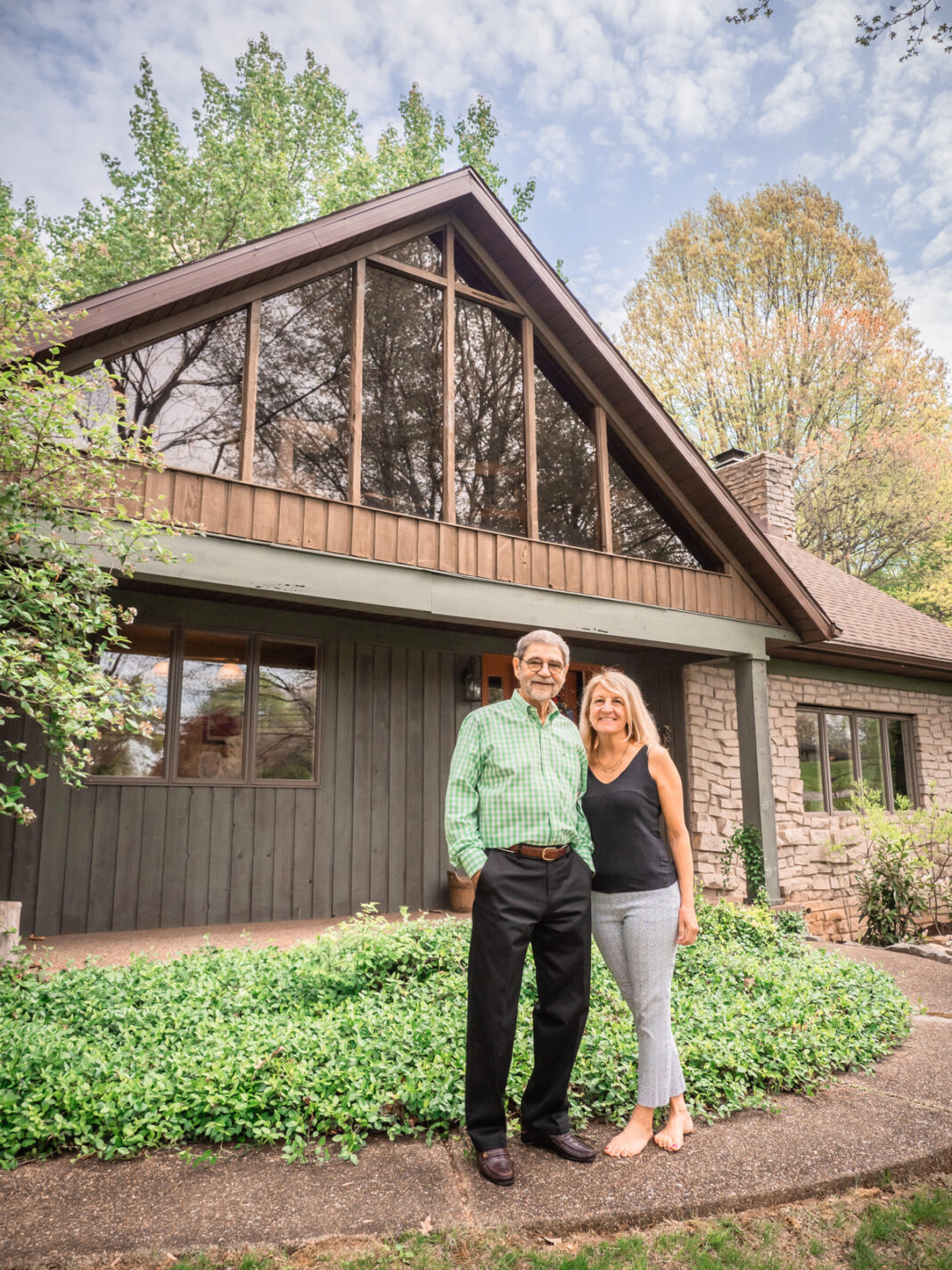 A quick walkthrough of Terry and Lynne Lewis’ home, and you’ll notice they are well traveled. From Australia to Italy to India, nearly every inch of this lodge-style abode is adorned with gifts, collectibles, and art from the couple’s world travels.

And they wouldn’t have it any other way.

Terry and Lynne purchased the 3,600-square-foot home in 1998 from original owners Jan and Linda Lockyear. Attracted by the rustic architecture, large, open rooms, and shaded corner lot on West Mount Pleasant Road, they moved in just four months after getting married.

The Lewises, who met at a Petroleum Club breakfast in the 1990s, settled into their growing area of Evansville.

“When we moved here, nothing was here. Deerfield Estates wasn’t here. Clear Creek wasn’t here. It was us, and then it was the highway,” Lynne says. “There were a couple of the old houses on the corner of Old State and Mount Pleasant, but there were none of those subdivisions. I used to run to Oak Meadow (Country Club). I would never run on this street anymore. This is crazy busy now, this whole area.”

Shying away from muted decor, almost every furnishing has a story, largely from the Lewises’ global travels as they purchased inventory for The Rug Merchant, their longtime East Side shop opened in 1980. Inside, their home is filled with family paintings, woodworking, keepsakes, and, of course, rugs.

“This house has got some interesting features and some great bones to it that we’ve been able to change around,” Lynne says. “This is Terry to a tee. It’s just a kind of rustic-looking home and over the years, I’ve been able to put some feminine influence toward it.” 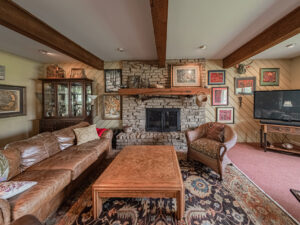 Some of their mementos are gifts, such as a South African Zulu spear hanging on the mantel above the 10-ton stone fireplace, given to them by Terry’s brother Kenny Lewis, who was in the U.S. Coast Guard at the time. Terry carved a wooden door into a curvy sculpture, now the base of a lamp that sits behind the bar in the living room. A carved wooden harmony goddess statue is displayed prominently in the living room opposite the fireplace and was purchased from a trip to St. Helena, California. Terry says it’s his favorite piece in their home.

Others are passed down from family, such as the piano from Lynne’s grandparents, or an 1870s side table made by Lynne’s stepdad’s grandfather.

“We didn’t just go buy everything. It all has a story or a reason. You don’t want to buy things that look like you went to ‘Rooms To-Go,’” Lynne says. “You want to collect things and add to them and find a favorite piece.”

“There are some people that when they get new things, they get rid of something else,” she adds. “That doesn’t happen with us.”

As expected, the Lewises have their own collection of rugs — 13 throughout the home, to be exact, including two 130-year-old antique rugs in the living room.

“You never would’ve known. It’s a beautiful, well-made rug,” Terry says. “It’s got patches in it, but with older rugs, you have to kind of be okay with asymmetry. That’s what makes them interesting.”

Among the renovations completed since the Lewises moved in, the most extensive work has been done in the kitchen, remodeled in 2021. The Lewises extended the interior wall two feet to widen walking space, which they say completely changes the look and feel of the kitchen. New wall cabinets also were installed, matching the original base cabinets from when the kitchen was first remodeled in 2006.

Around the corner from the kitchen is a multipurpose room that the family uses mostly as a playroom for the couple’s eight grandkids.

“When we did the kitchen, we were going to open it all up,” Lynne says. “But since our rooms are so big, this is the only place we had to have the grandkids go when they come here, so they’re not underneath our feet all the time.”

Showing off her own handiwork, Lynne built the back bookcase with her sister Kathy Stover in a single weekend, measuring and cutting the wood and using the old wall kitchen cabinets for the bottom.

Upstairs, the loft provides an open view of the front yard greenery and occasional wildlife from a full-gable window. The room is the preferred napping spot for the couple’s beloved cats, Tater Tot and Tinkerbell, and also is a favorite of pesky woodpeckers who sometimes just can’t stay away from hammering the cedar exterior.

“When you’re up here and looking out in the winter when it’s snowy, it’s just beautiful,” Lynne says.

The backyard, which the Lewises call their “harmony,” is lush with linden and ash trees for added shade. Railroad ties used as a retaining wall in the back of the yard contribute to the rustic vibe, and a green and beige shed match the exterior colors of the house. Lynne says it’s a beautiful and peaceful place for them to connect with nature and relax.

“We’ve had people walking by tell us it’s just like a little secret garden,” Lynne says. “This yard has made some huge transformations over time.”

As for their vast collection, the Lewises hope to pass on their belongings and home to their five children and eight grandchildren, admitting it’s the best way of lightening their load.

“Everybody feels like this is home to them,” Lynne says. “My kids tell us, ‘Don’t ever sell this house.’”