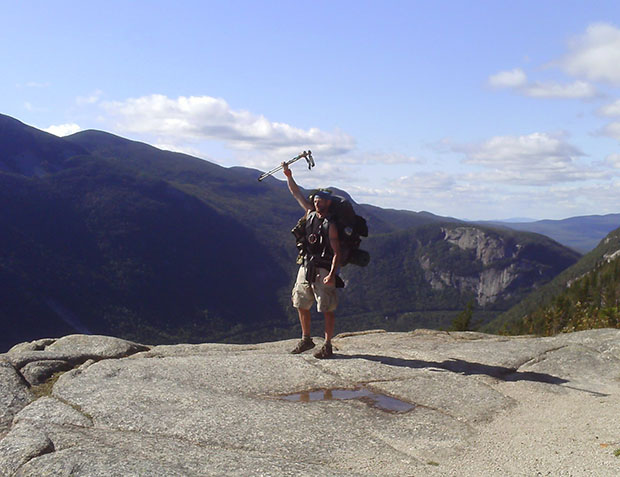 On March 9, 2008, Jason Austin set off on a hike that would change his life. Through a grueling 2,190-mile, seven-month journey, the Evansville native became one of 21,553 people in the world to complete the Appalachian Trail in what he says is one of the most difficult, yet eye-opening experiences of his life.

The Appalachian Trail (resolutely pronounced “Appa-latch-un” by nearby residents) is the longest hiking-only footpath in the world. Commonly referred to as the A.T., hiking the entire Eastern U.S. trail stretching from Georgia to Maine is a grueling undertaking through mountainous terrain, forests, and cliffs. Of the 6,000 hikers the Appalachian Trail Conservancy estimates will attempt to reach the A.T.’s final destination at Maine’s Mount Katahdin this year, approximately 15 percent will succeed.

“It’s a very enlightening experience,” says Austin, the production director at Midwest Communications. “It totally turns you into a completely different person, a better person. If you can finish it, the things that you thought mattered before will seem trivial after that.”

Austin’s love of the outdoors and obsession with the Appalachian Trail started when he was 10. His grandmother, Catherine Laughary, fostered his love of the outdoors by taking him to regional trails including Wesselman Woods in Evansville and John James Audubon State Park in Henderson, Kentucky.

He always wanted to make these hikes last forever; the fresh outdoors, the serenity of the woods, his connection to nature, the detachment from a busy society. One day, his grandmother suggested he really make it last by hiking the Appalachian Trail.

An inspired young Austin committed to learning everything he could about the A.T., going down a rabbit hole of research and discovery. He spent hours reading thick, personal diaries of those who hiked the trail. Already obsessed with reading maps and trail routes, he was determined to hike the A.T. one day.

Once he entered high school and college and life became busier, the dream of hiking the trail subsided. Still, Austin couldn’t quite forget the A.T.

“Next thing you know, I had I guess a midlife crisis in my thirties,” says Austin, who was working at a different radio station in Evansville at the time. “I remember coming home one day, and I was like, ‘When was I the happiest? I was the happiest when I was camping and hiking. Where did that dream go?’ That’s when I decided I wanted to hike the Appalachian Trail.”

His first expedition on the trail came in 2005. Joined by his cousin Brad Laughary, Austin ventured to Georgia’s Springer Mountain, the southern terminus of the A.T., and hiked the 78-mile section north through Georgia in one week.

When Austin returned home, all he could think about was getting back on the trail.

“I couldn’t get it out of my head. I couldn’t get out of how it made me feel every morning waking up to the sound of birds, the basic essentials of not being in a rush and waking up and filtering my water, making breakfast,” he says. “All I have to do is pack up my home, put it in this bag, and take my time and walk and climb mountains and see all these things.”

Austin began prepping for a return to the trail, this time hiking all 2,190 miles. Already in good shape, he didn’t do anything to physically prepare, but he diligently compiled the equipment needed — headlamps, water filter, waterproof bags, tent, water bottle, sleeping pad — for what would be a seven-month trek.

“There’s nothing you can do to prepare you to hike and climb up mountains every day, all day long, but you can prepare yourself by getting your gear together,” he says. “A lot of people get obsessed with their gear and their food, and they try to plan every day out. You can mail yourself food, a care package. My family did that. They mailed me food along the trail.”

He went a step further too, letting his apartment lease expire, donating a majority of his possessions to Goodwill, and quitting his job. He narrowed everything down to a backpack of essentials, stored his furniture at his parents’ house, and traveled the country for about a year before heading back out to Springer Mountain on March 9, 2008 — this time alone — to accomplish his lifelong dream.

“In the beginning, it takes about a month for your body to really get adjusted to what you’re doing,” Austin says. “You really don’t want to do more than eight miles a day in the beginning until you get your hiker body, until you start having what they call hiker hunger. That’s when your body’s ready and you can’t eat enough food, because you’re burning so many calories.”

Hiking the Appalachian Trail is an experience like no other, Austin says. Time slows down. Regular life pleasantries such as watching TV shows or playing sports become irrelevant. The only things that matter are the necessities: filtering water, setting up or finding shelter, and making sure to eat enough to get through the trails. Austin himself lost 20 pounds while hiking.

One week on the trail, a hiker explained to Austin, equals a month in regular life. A month on the A.T. is equivalent to a year. When he finally returned to Evansville after seven months, Austin felt like he had been gone for seven years.

Thru-hikers, a term used for those traversing the trail from start to finish, follow what is called a “white blaze,” a white mark painted on trees to mark the trail. Other paths follow a “blue blaze,” which marks shortcuts and avoids climbs, and a “yellow blaze” for hitchhikers.

Austin traveled on and off with other hikers throughout his journey. Toward the middle of the trail, he traveled with a group for hundreds of miles, humorously calling themselves “Camp Delay” for their consistent stops after finding a good camping spot.

Austin finished the A.T. in Maine on Oct. 11, 2008. He says completing the trail didn’t bring the happiness and excitement he had anticipated.

“They call it trail depression. It definitely gets you when you’re down,” he says. “It hits people in different ways, because you’ve spent six months of your life living this way, and all you’ve done is hiked and met amazing people and seen these amazing things and had these crazy experiences. Then all of a sudden, you’re done and back in society and some people, what they thought they wanted to do, they don’t want to do now, or in my case, I didn’t want to leave.”

After returning home, a friend invited Austin to move to a cabin in North Carolina. He accepted, thinking it would help him escape his depression. In North Carolina, he worked at a ski lodge for three winters and staffed a traveling food booth for music festivals for seven years.

After his 2015 hike, he was admitted into the hospital for reasons neither he nor doctors could explain. Months later, he was diagnosed with severe Lyme disease.

Austin’s case of Lyme disease — an inflammatory illness caused by bacteria transmitted by ticks and not uncommon among some A.T. hikers, though doctors weren’t sure if it was from the trail — took a toll on him and prevented him from hiking for several years.

It wasn’t until 2019 when he was accepted into the Johns Hopkins Lyme Disease Research Center in Baltimore, Maryland, that Austin decided to venture back out to the trail, just to catch a glimpse of the white blazes and reignite a passion that had been instilled in him since he was 10.

“My mom took me out to the Shenandoah National Park, and that was the first white blaze I had seen in four years,” he says. “I just remember breaking down, saying, ‘I can’t let this be what happens to me. I can’t let this win.’ That was sort of the beginning of trying to figure out what I needed to do.”

Austin found that the way to get his “energy back” was through trail magic, which refers to any hospitality offered to hikers on their journey. Trail magic comes in the form of a cooler filled with drinks left for hikers, or someone grilling hamburgers off the trail, or a sign that says “leave your trash here” for a volunteer to collect.

In 2020, Austin made his own trail magic, delivering pizzas to a shelter at
Davenport Gap just outside the Smoky Mountains in Tennessee, much to the surprise and delight of hikers.

“By that time, you’ve spent seven days hiking through the Smokies and three days hiking from Gatlinburg,” he says. “By the time I got there, I knew I wanted a shower and I wanted pizza. It just felt so good to get that energy from these people.”

Austin has turned his new passion into an annual adventure. He returns every March with his cousin Brad to deliver pizzas and cook sausage, egg, and cheese croissants at different spots along the trail. The pair even hand out small bags of candy at Garenflo Gap in North Carolina.

This renewed connection to the Appalachian Trail has eased the pain of Austin’s departure from hiking. He says he hopes to hike again on the trail but isn’t sure if his Lyme disease will allow it.

Photo of Jason Austin by Zach Straw. All others provided.

Suggested Reading: “On the Beaten Path:
An Appalachian Pilgrimage,” by Robert Rubin